Kyle Busch: Third is better "than we probably should have had" 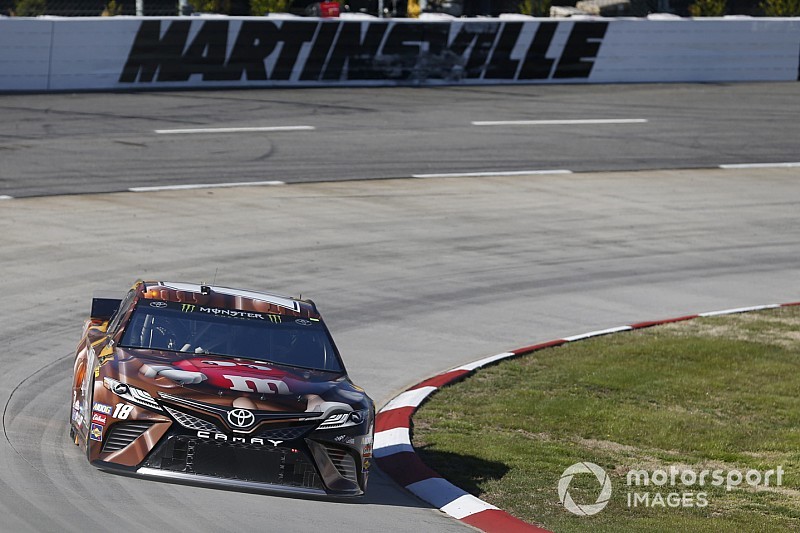 Kyle Busch found a way to get into the mix for the win Sunday at Martinsville (Va.) Speedway but it wasn’t easy.

Busch’s No. 18 Toyota wasn’t to his liking in practice over the weekend and qualified 13th for Sunday’s STP 500 – the first time since the Daytona season owner he failed to advance to the final round of qualifying.

In the race, perhaps because of the bigger rear spoiler and more downforce, Busch found it much more difficult to pass and until the final stage he remained out of the hunt.

“I could only do so much there for a while when I was out there with my hands full at the mid-point of the race running 12th. It’s about communication. I have a hand in that and being able to talk to my crew chief,” Busch said.

“I’m thankful to have Adam Stevens on the box and he made some smart changes for the second half of the race. It got us way better. The pit crew was awesome today, too. I think we picked up like 12 spots on pit road so that was a huge help because you couldn’t pass on the race track.”

Busch started seventh in the final stage and by the last pit stop, Busch came off in second behind Brad Keselowski with 45 laps remaining.

“I had a nose underneath (Keselowski) there in the middle of (Turns) 3 and 4 and he just chopped my nose off. Normally, when you hit a guy, they move out of the way. Instead it seemed like my car had to move out of the way,” Busch said.

“Then (Chase Elliott) got by me so we ended up finishing third. That was a lot better day then we probably should have had and we made the most of our opportunity.”

Asked what more he needed to make a run on Keselowski for the lead, Busch said: “More raw speed. We were just kind of off a little bit. We didn’t qualify good and I didn’t think we were very good in practice – not as good as we typically are here.

“Just lacking a little bit of something. From where we ran mid-way point of the race to where we finished there, that was a really good turnaround.”

Denny Hamlin finishes fifth in a ‘top-three’ car at Martinsville

Chase Elliott thought he “could root (Keselowski) out of the way”