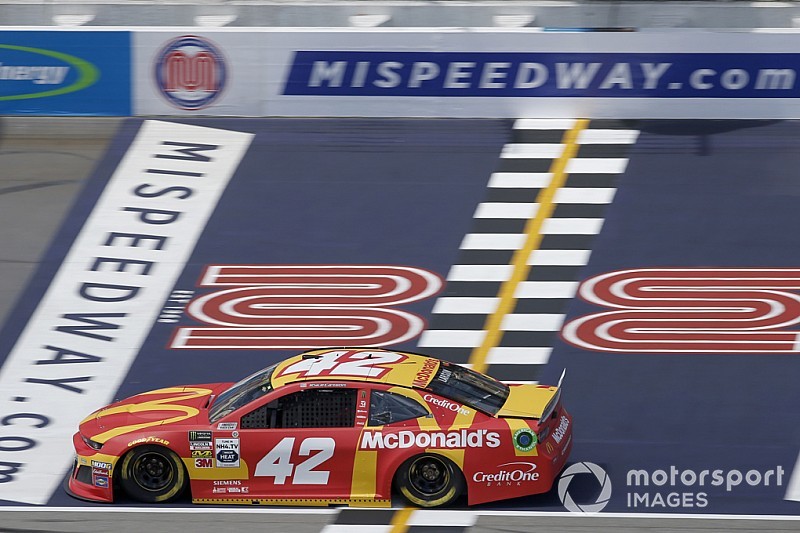 Kyle Larson is not wrecking and has been able to capitalize on the speed in his Chip Ganassi Racing cars – a very timely combination for a playoff run.

Thanks to several cars running out of fuel late in Sunday’s NASCAR Cup Series race at Michigan International Speedway, Larson was able to come away with a third-place finish.

Larson wasn’t contending for a win in the race but it was his third consecutive finish of eighth or better that has left him in a solid position to make the playoffs with three races remaining in the regular season.

After a rough season so far that has seen him wreck out of five races, he’ll take good finishes where he can find them.

“The last thing I knew I was running like ninth and I passed a couple guys, but so yeah, I guess more people ran out of fuel than I thought. I don't really know what happened there. But it worked out,” Larson said after the race.

“That was a great point saver, (we’re) well above the cut line now, so happy about that. … “We’re getting a little bit better. I feel like our cars are good. I feel like for intermediate style kind of racing, Michigan would probably be our worst track right now as far as just speed, so I’m excited now for the rest of the season.”

Clawing his way back into the playoffs

At one point this year, Larson had dropped to 21st in the series standings, which would leave him out of the playoffs since he has not won a race in 2019. He also wrecked in practice in back-to-back races at New Hampshire and Pocono and was forced to start those races from the rear of the field.

In the last seven races he’s clawed his way up to 13th, which currently puts him 71 points over the first driver outside the 16-driver playoff field cut-off line. Races at Bristol, Tenn., Darlington, S.C., and Indianapolis remain before the field is set.

“I feel like we’ve been showing a lot of speed here the last two to two-and-a-half months now, so we contended for a win in Chicago and have had some good runs since then,” Larson said.

“Some mistakes on my part to run backup cars, but all in all, we’ve done a good job to bring fast race cars to the track every week.

“Just says a lot about our team and fighting through the season, and it’s a good time of year to get the speed and get some rhythm, so hopefully we can keep it going.”

Despite setback Jimmie Johnson plans to 'fight for every point'

How winning in NASCAR has changed for Kevin Harvick