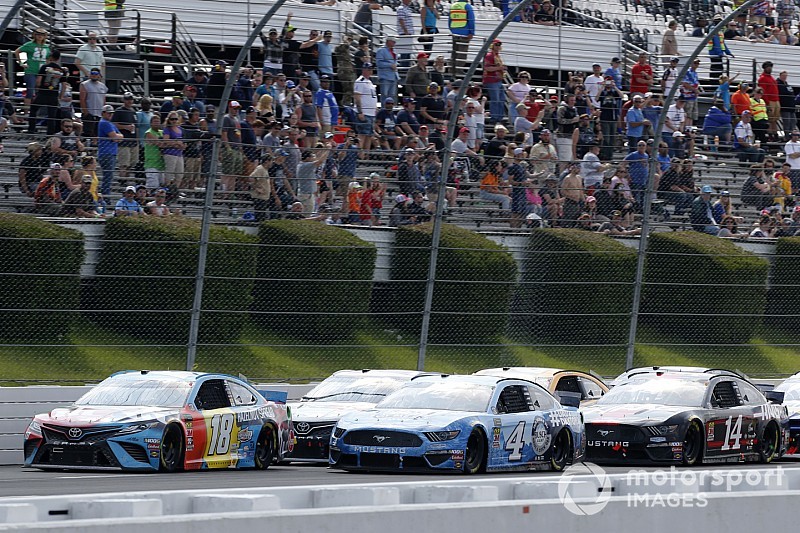 Kyle Busch looks to tie a record at Pocono Raceway as drivers face some unknowns with the PJ1 traction compound added to the track.

Jim Utter: I don't think this is a weekend for a new winner. Kyle Busch has dominated Pocono of late, having won three of the last four races and is looking for his third consecutive win. The only other driver to win at Pocono since spring of 2017 was Martin Truex Jr., who is now Busch's teammate at Joe Gibbs Racing. But if there a first-time winner this season, I'll go with Erik Jones, who ran third at New Hampshire this past weekend and has finished in the top-five in his last two Pocono races.

Nick DeGroot: They'll have to get through Kyle Busch first. He has won three of the last four races at the Tricky Triangle and will be tough to beat again. But as for who could earn their first win of the season, I'd watch Ryan Blaney, but also Daniel Suarez. Some of his best races have come at Pocono, including a runner-up result last year after leading 29 laps.

Tim Southers: I think Ryan Blaney can repeat where he won with the Wood Brothers a few years ago in the Cup Series at Pocono so yes I think it could happen this weekend. I also wouldn’t count out William Byron who has been fast and Erik Jones who has really been looking good the past couple of weeks.

Ryan Newman has five top-10s in the last six races and is back in the playoff picture. Do you think he makes the cut?

Jim: Honestly, a couple weeks ago, I would have not given Newman the nod to make the Cup Series playoffs, but his recent performances and he and his Roush Fenway Racing team's ability to overcome numerous obstacles in races and still produce strong finishes has been impressive. If there is a team "peaking at the right time" it may well be the No. 6 team. It makes you wonder what this team is capable of if they can have an incident-free race.

Nick: I never count out Ryan Newman, especially after he nearly stole the 2014 title from Kevin Harvick despite zero wins the entire season. However, he has some competition around him including Jimmie Johnson and Clint Bowyer. It won't be easy and top-tens might be enough to sneak in, but a win is the only way he would make himself truly safe.

Tim: I think if there is a driver who could muscle his way into the postseason it’s Newman for sure. At the first of the season I would have said no way, but he and his team have seemed to find the right combination at the right time. The next couple of weeks will be crucial for them, but if anyone has the ability to race their way into the playoffs my money is on Newman to get it done.

The June Pocono race wasn't what many thought it would be with the new aero package. How will the addition of the PJ1 track compound change this weekend's race, if at all?

Jim: I'm a big fan of anything that helps to increase the number of racing grooves, which almost always tends to improve the quality of the racing. I commend Pocono for giving it a try. Some drivers like Denny Hamlin have been advocating its use at this track for quite some time. I'm cautiously optimistic this Pocono race will be a much more entertaining one.

Nick: Well they had to do something after the lackluster June race. I don't see this as a panacea to fix all the issues that made the first race forgettable but it should help. Hopefully passing will be made easier and it will be easier to challenge the leader.

Tim: I hope the compound helps make it a better race than the one we saw last month. I agree with Jim that Pocono should be appreciated for giving the traction compound a try this time around.

Three races remain before the Truck series playoff grid is set. Do you expect any surprises this weekend at Pocono?

Jim: I predict Pocono will be a break-through weekend for Kyle Busch Motorsports this weekend, with either Harrison Burton or Todd Gilliland picking up their first wino of their respective careers and locking themselves into the playoffs. Toyotas have won the last four Pocono Truck races - all by KBM drivers.

Nick: No, I expect it to be one of the usual suspects taking the checkered flag this weekend. KBM's drivers really do need to win so they'll be ones to watch but I don't see it happening at Pocono.

Tim: I don’t know if it would be a surprise considering the equipment they drive, but I would not be surprised at all to see Harrison Burton or Todd Gilliland celebrating a win Saturday afternoon at Pocono.