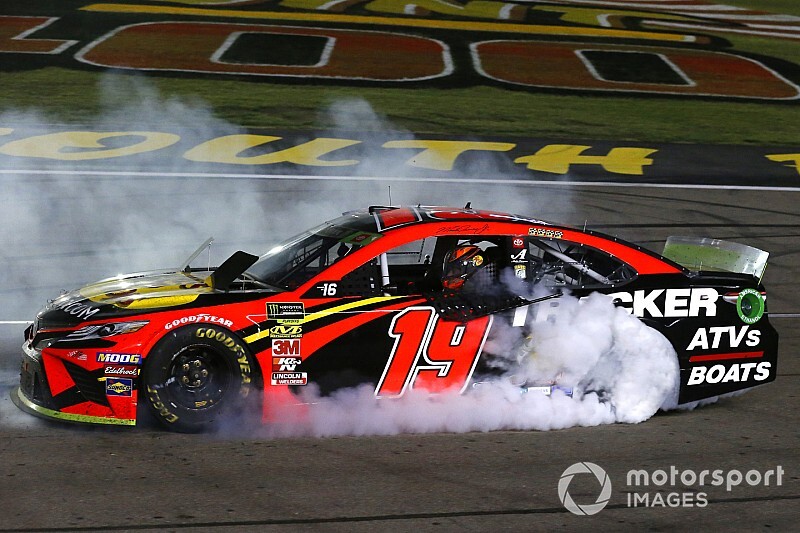 Martin Truex Jr. knows people have been asking where his No. 19 Joe Gibbs Racing Toyota team has been lately, even early in Sunday’s race at Las Vegas.

The answer turned out to be very timely – back in Victory Lane.

While Truex came rolling into the NASCAR Cup Series as one of the “Big Three” – three drivers that each won four races in the regular season – it had been since June since he last one a race.

He rectified that in style Sunday, coming on strong late in the South Point 400 to pass Kevin Harvick with 20 of 267 laps remaining and cruising to the victory in the playoff opener.

“I think a lot of people have been like, ‘Where has the No. 19 been? We don’t expect them to be that strong.’ We know what we can do. When we live up to our potential, it makes us all happy,” Truex said after the race.

In fact, in the three races previous to Las Vegas, Truex had failed to finish better than 13th, including a disappointing 27th-place finish at Indianapolis Motor Speedway.

Even at Las Vegas, Truex qualified 24th for the race, which didn’t exactly leave an impression that he would be a contender for the win.

“We’ve had a stretch of six or seven races that we’ve been really strong in. We feel like we've had cars capable of winning,” Truex said. “We honestly don't have a whole lot to show for it. We had no bonus points in that stretch. It was getting frustrating.

“When we can get things to roll our way, not make any mistakes, this is what we can do.”

Truex’s crew chief, Cole Pearn, said the victory was like getting “the monkey off our back.”

“You work really, really hard just to be disappointed every week. It’s huge when it goes right,” he said. “You think about it, you can win eight races in a season and have the best career year, but that means you're probably miserable 30 other weeks.

“The ratio is not very good. Definitely a lot more fun to win.”

The victory at Las Vegas comes with a big bonus for Truex – providing an already strong team more time to build an advantage that carry through the playoffs.

Truex is now already locked into the second round regardless of where he finishes the next two races – at Richmond, Va., and the Charlotte Roval – but he can continue to amass playoff points with stage and race wins.

“I think if we can get to Homestead, we’re going to be really tough to handle. With that being said, it’s tough to get there,” Truex said. “Nine more weeks more weeks now.

“We got to be really good. No mistakes. Can’t beat yourself, that’s first and foremost. I know we have the team and the performance to do it.”