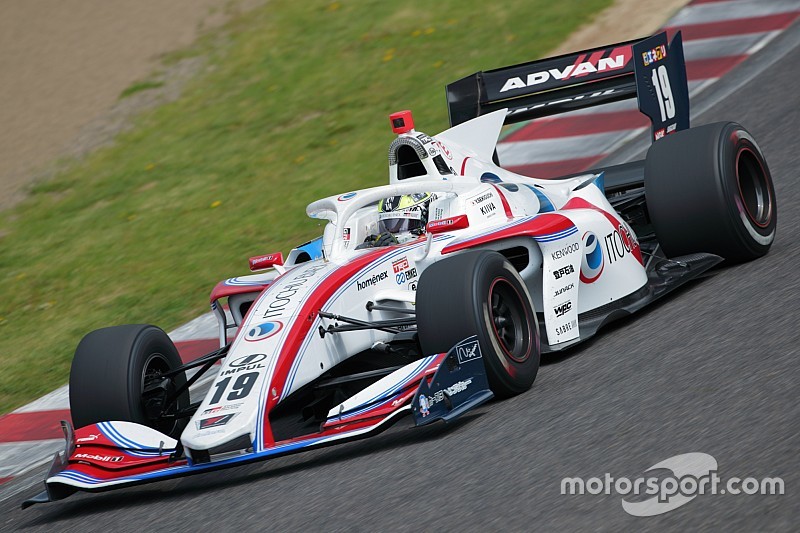 Super Formula front-runner Yuhi Sekiguchi claimed his first win of the 2019 season at Autopolis with a charging drive from 16th on the grid.

Sekiguchi was one of the several leading drivers unable to knit together a clean lap in a wet qualifying session on Sunday morning, which was punctuated by three separate red flag periods.

But a strategic decision to extend the first stint turned out to be decisive, allowing him to beat defending champion Naoki Yamamoto by 3.633s.

When the second race of the season got underway on a dry Autopolis circuit, a slew of cars immediately pitted to get the mandatory stop out of the way - with more drivers following in on lap three when the safety car was deployed.

That shook up the order at the front, with pole-sitter Yuji Kunimoto, Sekiguchi and Tadasuke Makino (all yet to pit) leading the field from Hiroaki Ishiura, the leading driver to have stopped in the early laps of the race.

Impul's Sekiguchi initially tucked in behind race leader Kunimoto, before passing the 2016 champion with a brilliant move on the outside of turn 1 on lap 13.

Once in the lead, Sekiguchi dropped the hammer, building a 10-second advantage within a span of three laps.

The 31-year-old continued to chip away from the field, so much that he was able to come out in front when he finally made his pit stop on lap 40.

The result marked Sekiguchi’s sixth victory in Super Formula and the first since last year’s Okayama round.

Dandelion's Yamamoto, who started 17th after crashing in qualifying, ran eighth on track after the early pitstops were settled, but managed to work his way up the field to finish second.

Team LeMans’ Kazuya Oshima likewise jumped up the order after switching to soft tyres on lap 1, picking up the final spot on the podium in third.

Makino (Nakajima Racing) didn’t have the same speed as similarly late-stopping Sekiguchi, but did enough to finish fourth, just ahead of the second Dandelion car of fellow Formula 2 graduate Nirei Fukuzumi.

Auer's teammate Harrison Newey and Mugen’s Tomoki Nojiri both stalled at the start of the race and were classified a lap down in 17th and 18th respectively.

Red Bull junior Dan Ticktum was one of the two retirees at Autopolis, the Englishman crashing out of the race on the very second lap.

Formula 2 convert Artem Markelov was only able to start the race on lap 4 after a major shunt in qualifying, but was immediately forced to park his car outside the pit exit with what appeared to be a suspension failure.