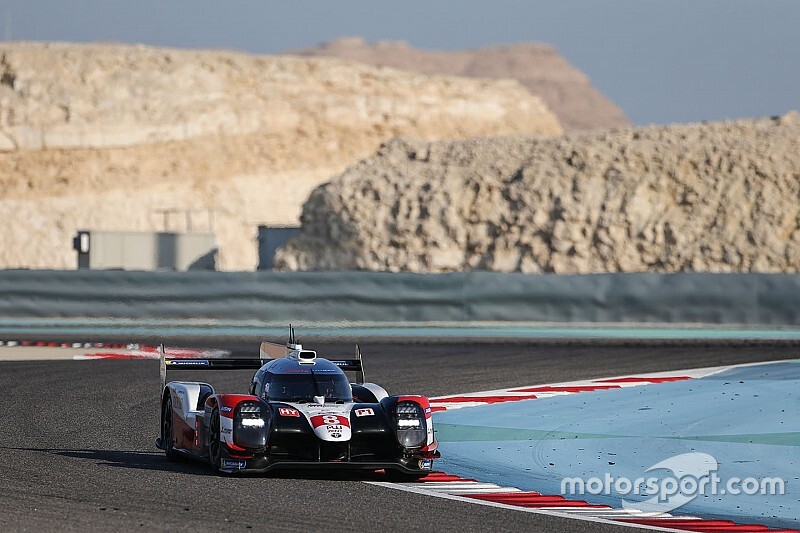 Toyota set the quickest time in final practice for this weekend's FIA World Endurance Championship round in Bahrain, leading the best of the Ginettas by just over a tenth of a second.

Having trailed both its LMP1 rivals on Thursday, the Japanese manufacturer led third practice from start to finish, courtesy of Brendon Hartley’s time of 1m44.285s in the #8 TS050 Hybrid.

Toyota and Ginetta were the only two teams to finish clear of the LMP2 field, as cold conditions and reported rain drops meant times were significantly slower than on Thursday.

The #6 Ginetta finished third with Guy Smith at the wheel, 2.6s off the pace, while the Rebellion of Gustavo Menezes was classified a further three tenths adrift in fourth.

The Swiss outfit’s Oreca-built R13 was consigned to the garage for the final part of the session, with both the engine cover and the front bodywork removed as mechanics frantically worked to fix an as-yet unknown technical issue.

The #7 Toyota propped up the LMP1 timesheets, Jose Maria Lopez finishing nearly 3.5s down on the sister TS050 Hybrid.

Phil Hanson put the United Autosports Oreca on top in the LMP2 class with 40 minutes to go, his time of 1m1m45.970s putting the Anglo-American team two tenths clear of the Jackie Chan DC Racing Oreca of Will Stevens.

JOTA’s Oreca was third thanks to a time of 1m46.767s by Antonio Felix da Costa.

Andre Negrao slammed into the barriers at the exit of Turn 13 in his first flying lap, but managed to get his Signatech Alpine Oreca back to the pitlane for repairs.

Ferrari topped a session in the GTE Pro class for the first time this weekend, with Davide Rigon setting the quickest time in GTE Pro in the #71 488 GTE.

Rigon displaced the #95 Aston Martin of Nicki Thiim from the top 15 minutes into the session and was unchallenged for the rest of the morning.

Allesandro Pier Guidi made it two Ferraris in the top three with a time of 1m56.367s, as the two Porsches ended slowest of all in GTE Pro.

The GTE Am class was topped by Ben Barker in the #86 Gulf Racing Porsche.