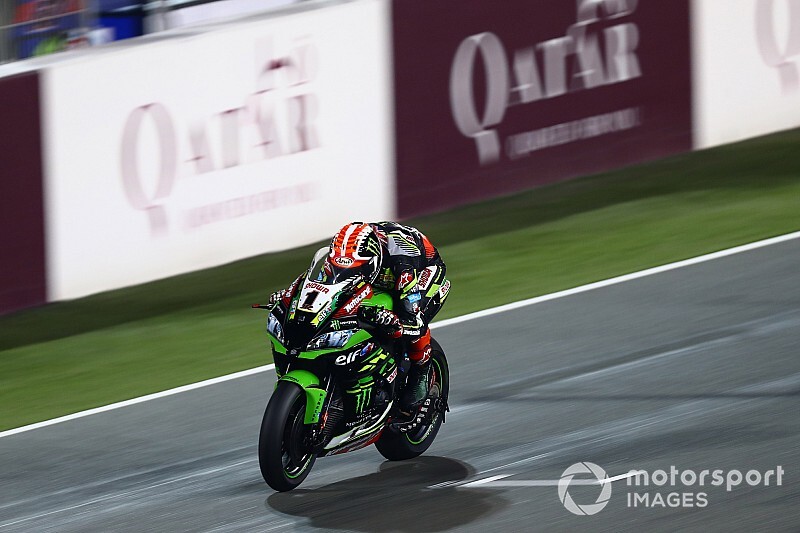 Jonathan Rea eased to victory in the final Superpole race of the 2019 World Superbike season ahead of Alvaro Bautista on Saturday in Qatar.

Rea grabbed the holeshot off the line from pole position and was never surpassed all the way to the chequered flag to claim his 16th win of the year.

Yamaha’s Alex Lowes slotted in behind Rea on the run to Turn 1 at the start, with Leon Haslam on the sister works Kawasaki and Ducati Alvaro Bautista following.

Bautista made light work of Haslam on the pit straight, using the power of the Panigale V4 R to blast past into third at the end of the first of 10 laps.

Meanwhile, Rea was already over a second clear of Lowes, with his gap up to 1.7s by the end of the second tour.

Now free of Haslam, Bautista set about hunting down Lowes, and carved through on the inside of Turn 11 on lap two to move into second.

Bautista’s march forward ended there, however, as Rea continued to gouge time out of the rest and was 2.5s clear by lap three.

Faultless to the end, world champion Rea matched erstwhile standings leader Bautista’s season tally of 16 wins and will start on pole for the last race of the season later this evening.

Lowes came under attack from Haslam in the latter stages of the sprint contest, but held onto the final podium spot to strengthen his third position in the championship.

Chaz Davies completed the top five on the sister works Ducati having started from 12th, with Michael van der Mark (Yamaha) fending off a hard-charging Loris Baz on the Ten Kate-run R1 for sixth.

Sandro Cortese dropped off the front row at the start and was eighth in the end on his GRT R1, with Eugene Laverty securing the final point in ninth on the Go Eleven Ducati ahead of Marco Melandri (GRT).

Toprak Razgatlioglu’s outside hopes of securing third in the standings took a fatal blow when he failed to make the start of the sprint race due to a mechanical issue with his Puccetti Kawasaki.