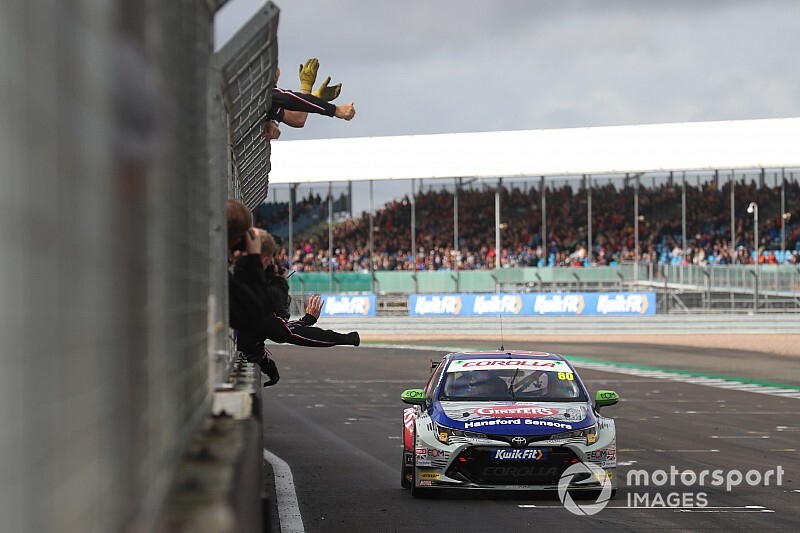 The Speedworks driver led from pole while running on the quicker soft option tyre, but was hit by Plato under braking into Brooklands as conditions deteriorated.

After a huge slide he saved the errant Toyota, and got past a struggling Tom Oliphant to win by just one second over Turkington.

Ingram’s getaway was suffice to hold first into Copse ahead of Plato, while Turkington found two places– in a race cut to 21 laps after a propshaft failure brought Aidan Moffat to a halt on the formation lap.

Rain held off initially, but in the later greasy conditions Plato struggled to slow his Vauxhall into Brooklands, making contact with Ingram.

Oliphant, caught in the melee, then hit Plato wide and as they all rejoined side-by-side it was Oliphant in the BMW that led the way.

But a safety car neutralised the race when Adam Morgan spun his Mercedes into the gravel on the exit of Becketts.

Andrew Jordan, who entered the race second in the points, disputed title rival Dan Cammish over track position and they banged doors while circulating.

At the restart, Oliphant slid immediately wide at Copse to allow Ingram through and a hard-charging Turkington into second.

The race was then red flagged as the slick-shod field navigated the greasy circuit, with Carl Boardley being tagged into the gravel by Mark Blundell.

With more than 75% of the race run, Ingram was declared victor to double his tally for the day and Turkington was second.

After having his championship lead cut to just six points after race one by Jordan, an inspired drive takes Turkington now 11 points clear of Cammish, who leapfrogs Jordan in the standings.

Although Cammish retained his third-place finish and keeps his points tally, he was fined £1500 and had three penalty points added to his licence for the safety car contact with Jordan.

Josh Cook, an early contender for victory, struggled as the rain grew heavier and fell to fifth ahead of teammate Smiley and then Oliphant.

Jordan was a frustrated eighth ahead of AmD Tuning driver Mike Bushell.