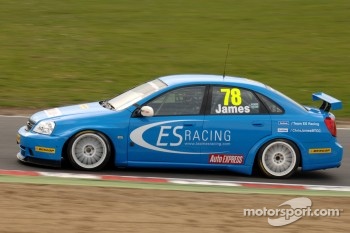 Drama before the start of race one with a collision between Liam Griffin in the Motorbase Ford and Rob Collard in the WSR BMW on the formation lap would mean a delay as they cleared the stricken Ford away from the track. A slow start from James saw him lose a place to Frank Wrathall through Paddock Hill bend, but following a brief safety car period James would make a confident pass heading in to Paddock Hill Bend as he shot by Wrathall on lap 7. James would bring the #78 Chevrolet Lacetti home in 15th place.

Race two proved frustrating for James after a spin on cold tyres exiting Graham Hill bend defending his position from Tony Hughes lost him places. A safety car period after a first lap collision between Tom Boardman and Tom Onslow-Cole bunched the field up once again but James would ultimately finish in 17th position.

During the final race of the weekend James held off Tony Hughes to once again to finish the race in 19th place ahead of a recovering Andrew Jordan who had suffered a puncture and been forced in to the pits. James posted his fastest lap of the weekend in the closing stages of the race.

Chris James was in a confident mood at the end of the weekend: "The goal was to not embarrass ourselves, keep the car straight, not finish last and we've done that.

"I was disappointed with the second race" admitted James. "I had a bad start and lost positions, but I managed to get past Tony Hughes at Druids and wanted to keep him behind. Unfortunately I wanted for a little bit too much and spun it on cold tyres. Luckily the safety car came out but I was annoyed with myself and not really in the right frame of mind, it didn't do the tyres any good with the spin as it put a flatspot on them."

Looking ahead to Donington Park James said: "Overall the car's straight and ready for Donington, we've come through relatively unscathed and not managed to upset anyone," before adding "It's just experience and time in the car, every weekend is like another practice and test session for us, obviously a very very serious one but we're learning constantly about the car."

Team Manager Rhea Beauchamp was happy with how the weekend panned out: "Successful weekend for Chris on his debut at Brands Hatch, the team have worked fantastically, the car is in good condition, Chris's times improved throughout the day, setting his fastest lap time in the final race. So we're really pleased and looking forward to Donington"