Renault and McLaren are both looking to return to their former glory in the coming seasons, and we investigate their progress with their front wing and nose designs since the rules changed for 2019. 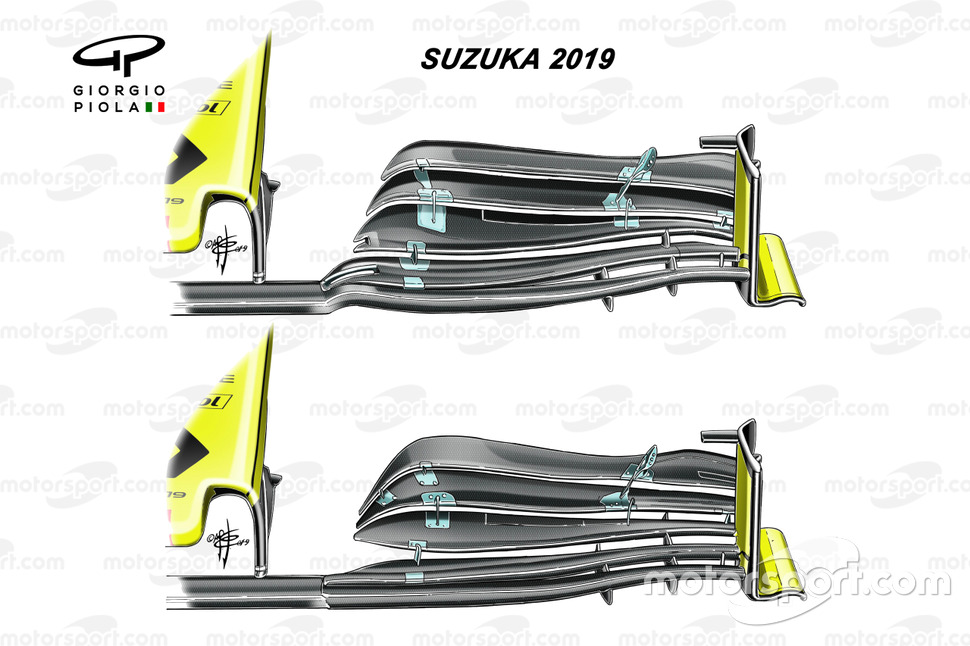 Renault's front wing design continued to follow the same philosophy they had leading up to the 2019 championship, albeit without all the additional aerodynamic surfaces banned by the new rules.

During the season it made changes to the inboard end of the flaps and the mainplane's juncture with the neutral section.

It changed the mainplanes curvature at the juncture and added a slot just above it, whilst the change of approach to the position and shape of the flaps all have a bearing on vorticity of the Y250 vortex shed from this region. 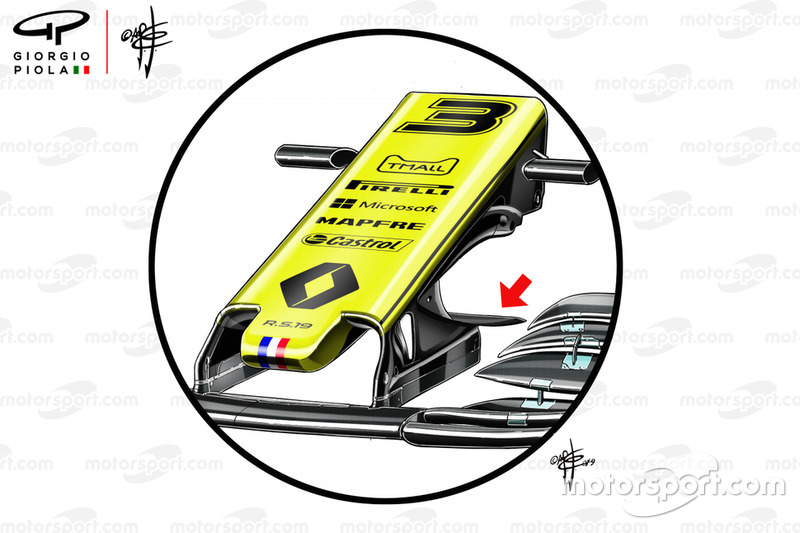 Renault introduced its version of the cape at its home Grand Prix in France (red arrow). The solution, a makeshift one, rather than an entirely new design, was fitted to the tail end of the long, slotted, wing pillars that the team used. 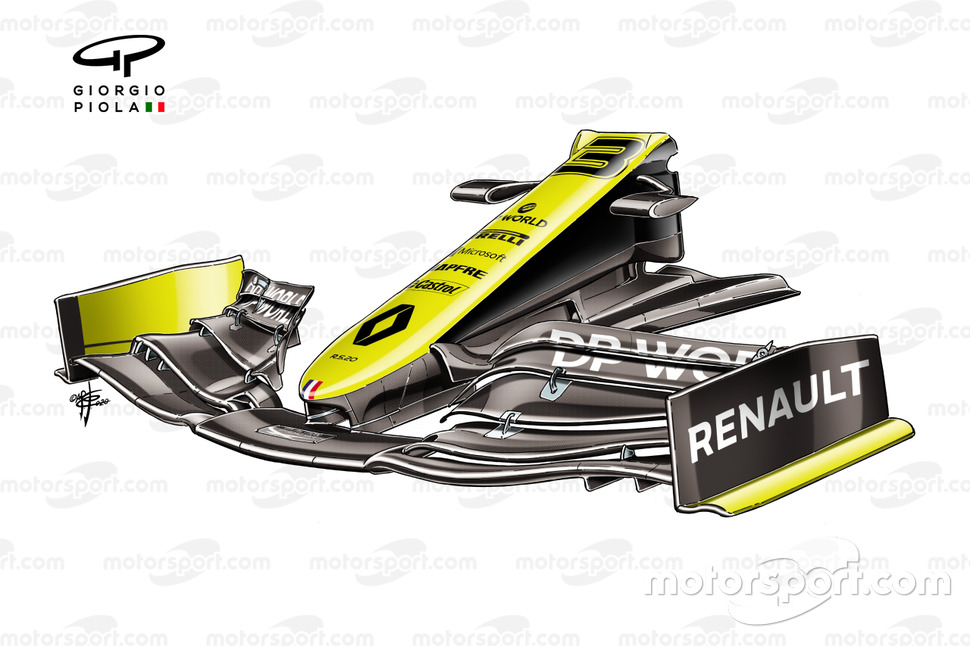 For 2020, Renault has the most visibly different design, having followed Mercedes' lead by using a thin central body that tapers out at the chassis end and creates a more bulbous tip section.

The thin main body section allows a much larger cape to be used, capturing more airflow and focusing it in the desired region.

McLaren introduced an extremely complex nose assembly in 2018, plucking design aspects seen elsewhere on the grid, including the flow through nose tip section, slender body in the central section and a cape. 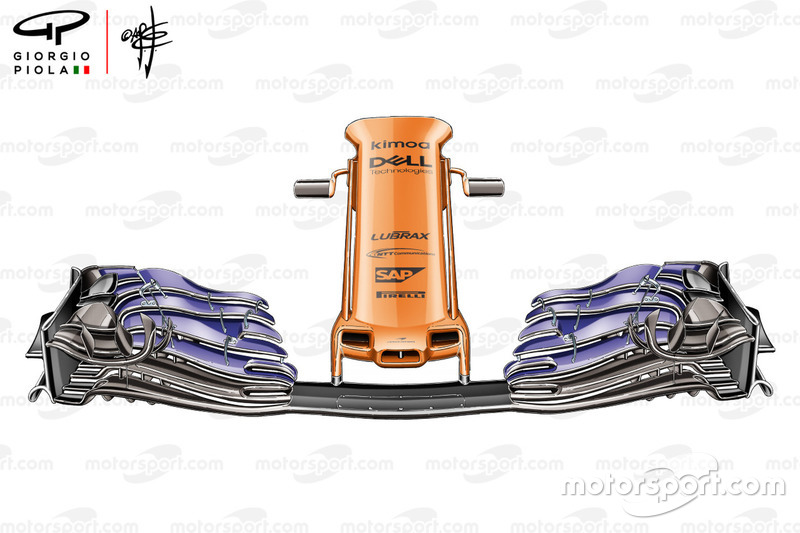 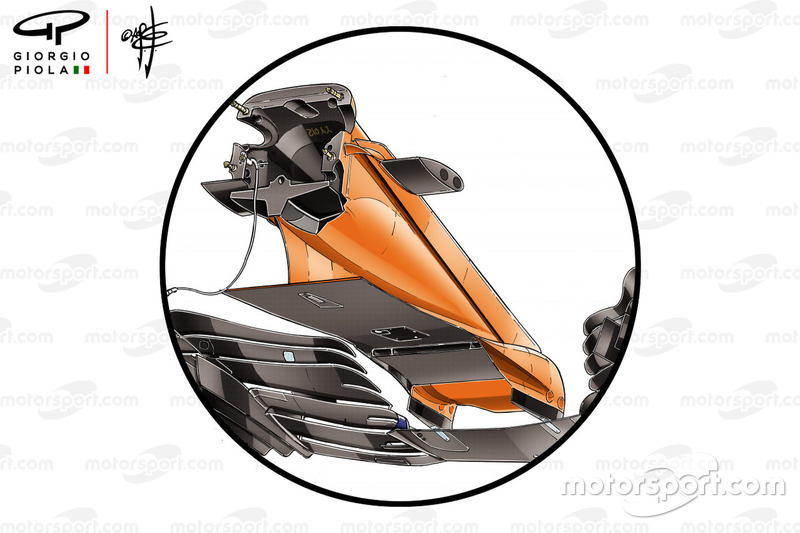 Confidence was high that the updated nose assembly, introduced at the Spanish GP, would help to unlock the latent potential of their car but, the gains seen in its simulations didn't fully translate to the track. 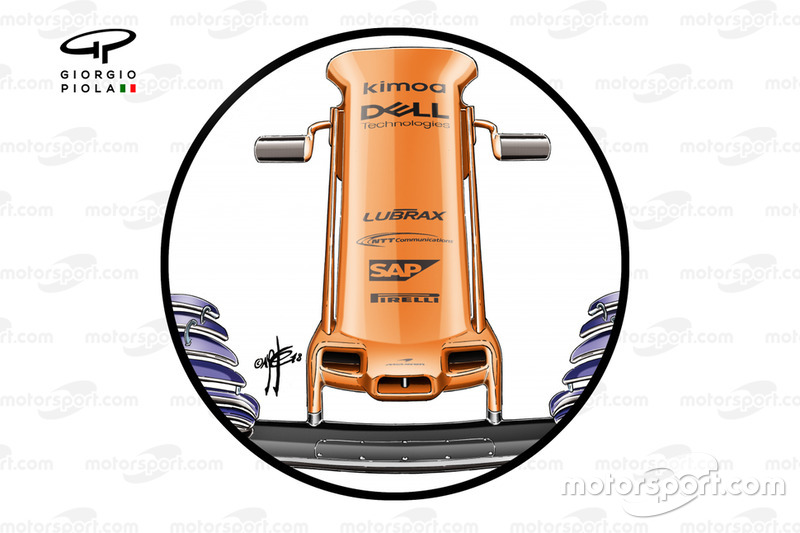 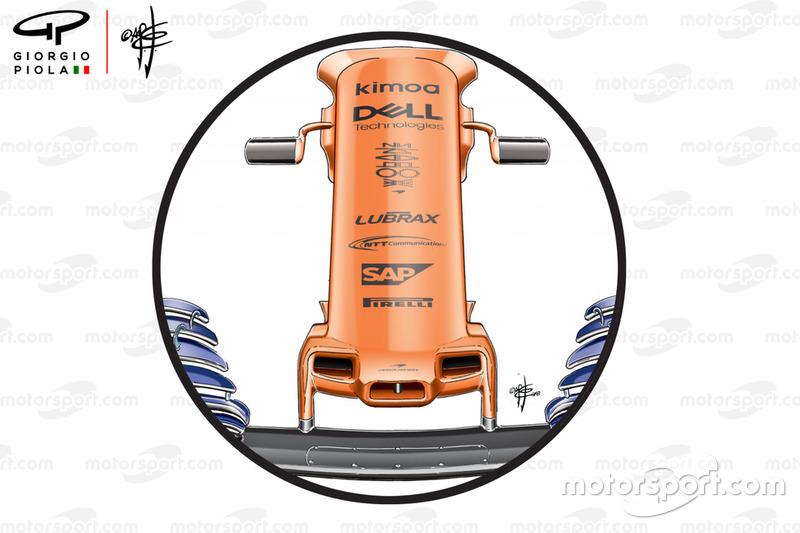 During the season it ditched the panels on the side of the nose, a feature that was supposed to help with channelling airflow but actually had some unwanted side effects. 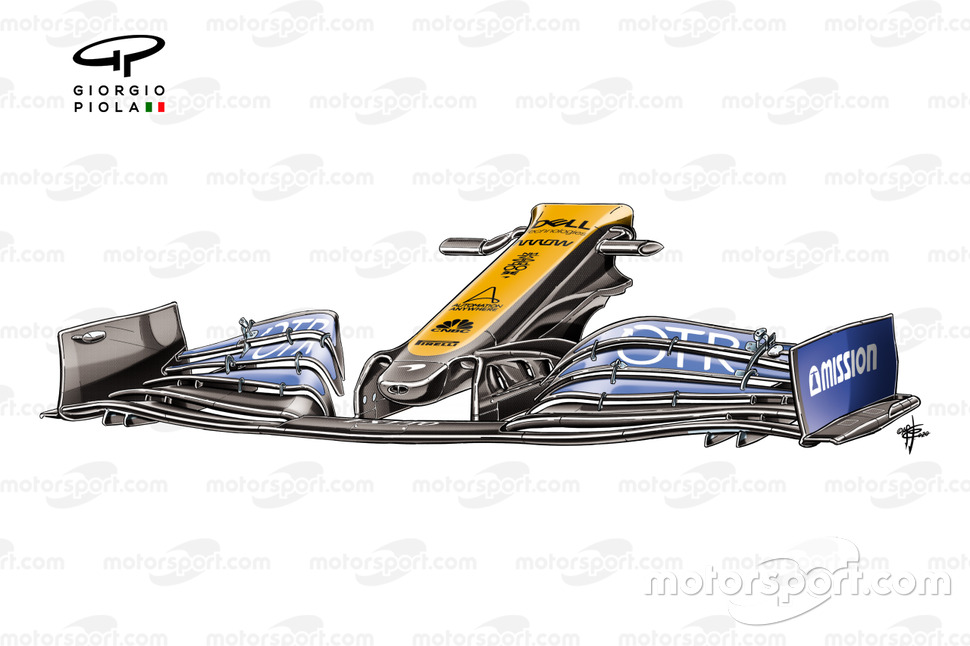 For 2019 the nose design remained relatively stable but for 2020 the team simplified the tip region, ditching the flow through channels entirely and returning instead to a simple thumb-style nose tip. 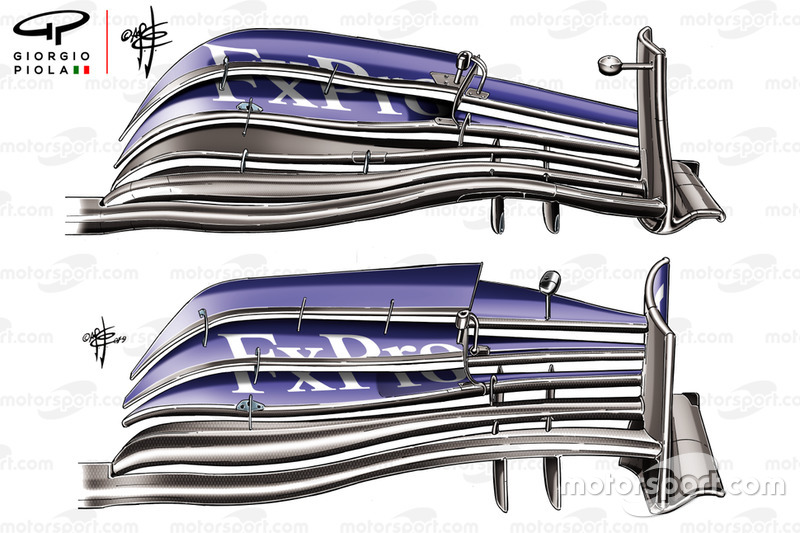 For the 2019 regulation changes its first design erred more closely to a loaded style front wing (left image, bottom) but, as it optimized the flow over the wing and better understood how much of the wing to devote to the generation of downforce and how much to use for flow conditioning, it started to make alterations.

The wing evolved to feature more of the unloaded features, with the chord and angle of the outer sections of the flaps reduced. The attack on the leading edge of the mainplane was also reduced, lessening the exposure of the two under wing strakes.

Meanwhile, the infra-red cameras which had been mounted atop the flaps were moved and installed on the endplate instead, altering their aerodynamic impact. 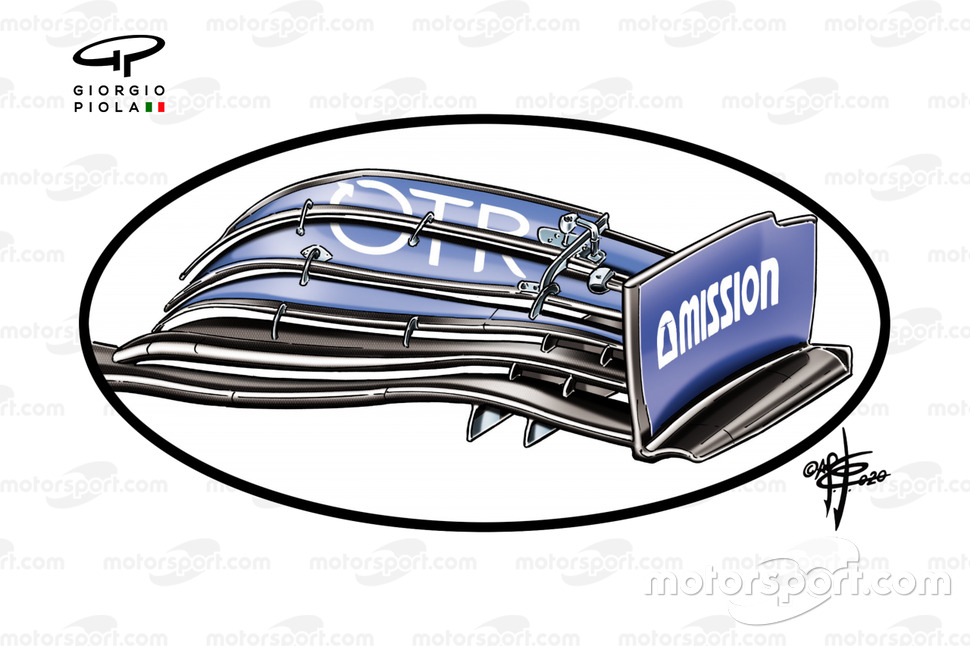 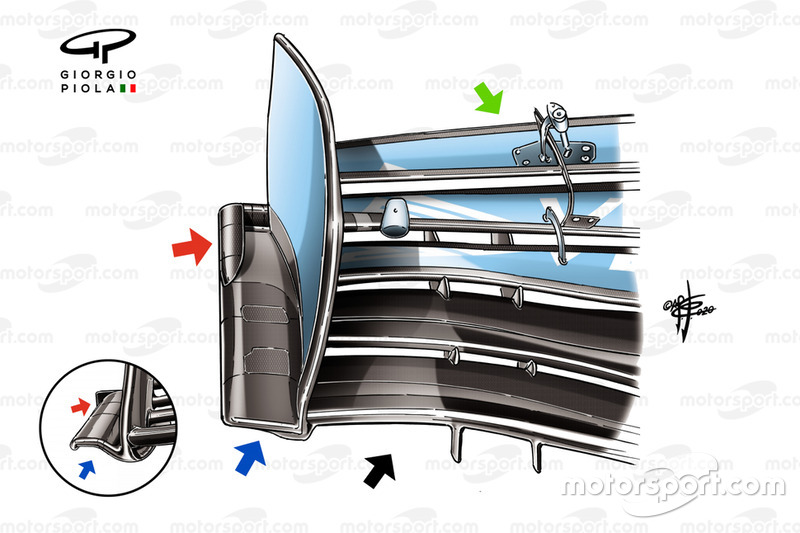 The initial design run by McLaren (left) was a carry over from 2019, whilst the team introduced a new solution (right) at the second pre-season test.

The standout feature of the revised design was the Gurney-like lip that had been added on the rear edge of the footplate (red arrow). This obviously stands out when compared to the other changes but works in conjunction with them, with the shape of the footplate (blue arrow), height of the mainplane where it meets with the endplate (black arrow) and shape of flaps (green arrow) all revised.