The aero revamp that Red Bull has unleashed in Portugal

Red Bull has shown no signs of easing off in its Formula 1 development push, as it brought a raft of upgrades to its RB16B for the fight against Mercedes in Portugal.

The changes are especially interesting because rather than be focused on one particular area of the car, as is usually the case when new parts arrive, the changes are extensive from front to back.

Max Verstappen was tasked with testing the parts during Friday’s FP1 session whilst Sergio Perez ran the car in the old configuration, as the team made sure it was getting the performance uplift it expected.

Once it had that confirmation, Perez’s car was fitted with the parts for FP2 and they’re now expected to stay on the car for the rest of the weekend.

Here we look at what’s new on the Red Bull. 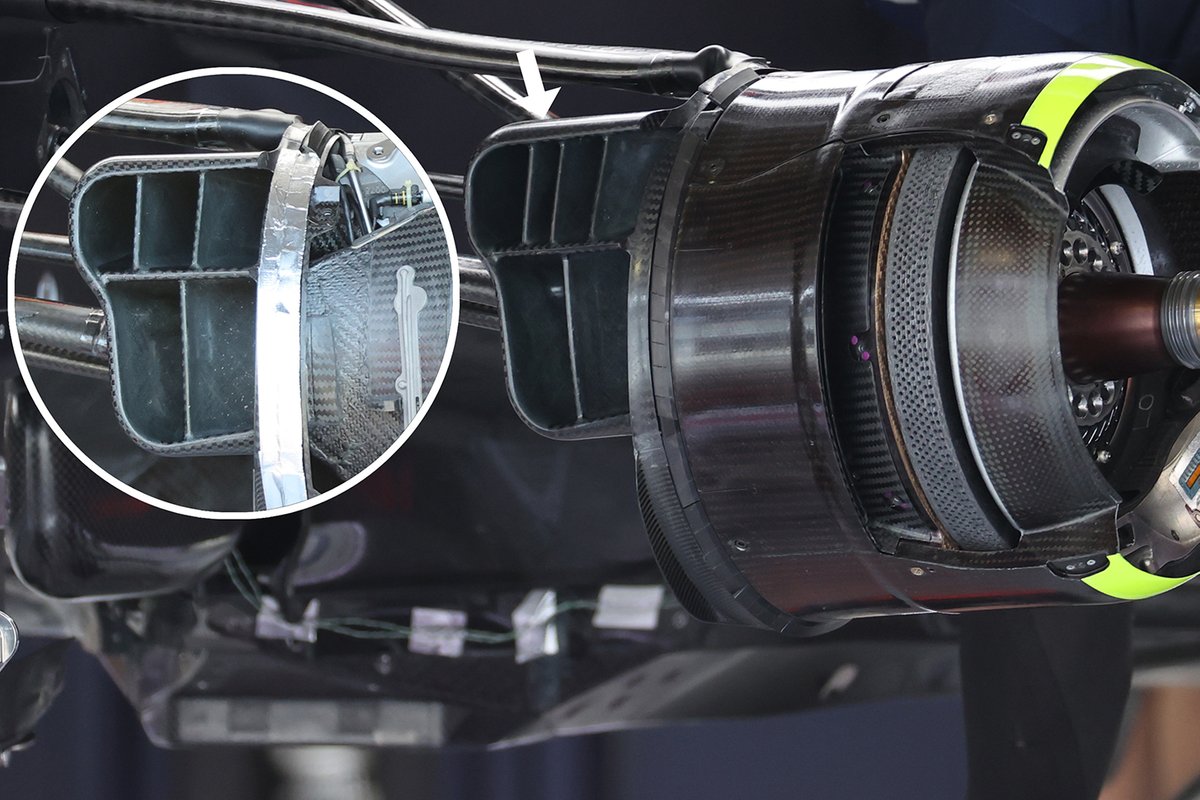 A small detail change has been made to the front brake duct, with an extra vertical divider placed in the upper section of the inlet.

This optimisation is about channelling the airflow more efficiently into that central inlet and delivering the airflow it collects to the designated section of the brake assembly.

This is more likely about the airflow behaviour as the wheels are steered, because the oncoming airflow behaves differently but their requirement remains the same. 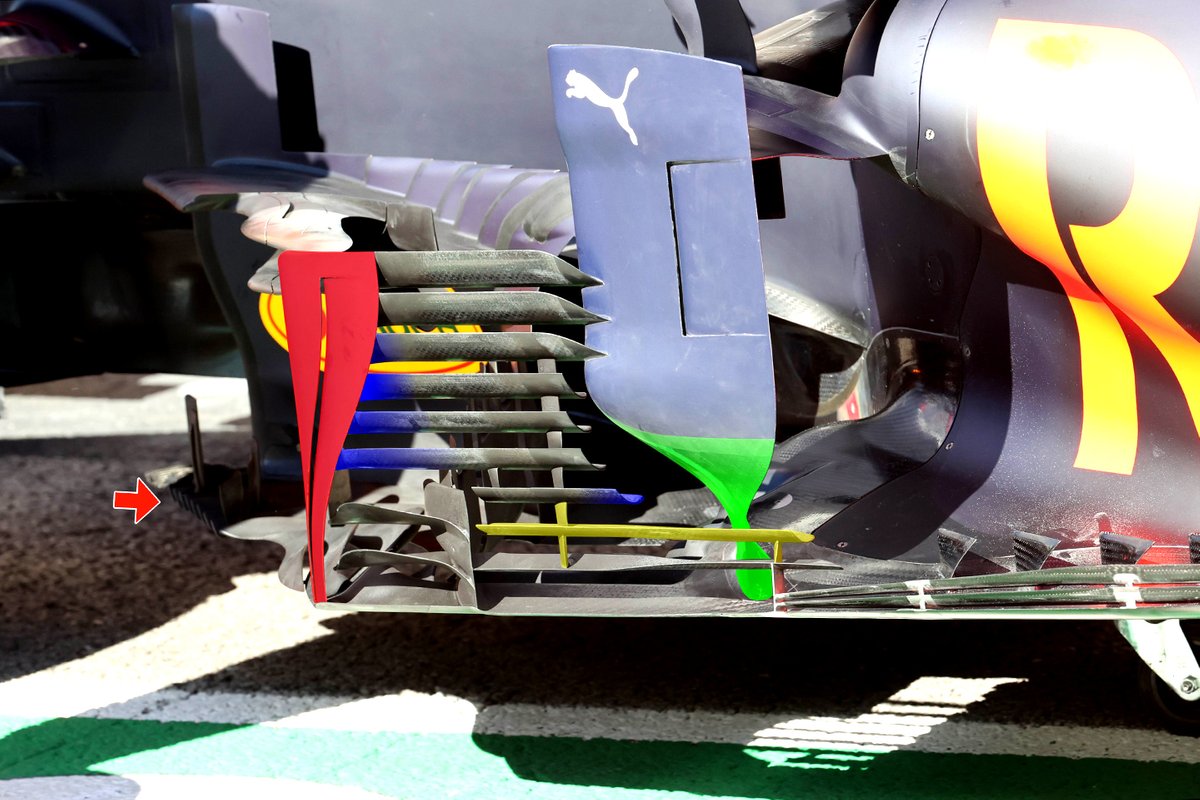 The changes made to the bargeboards and sidepod deflectors are pretty significant in terms of optimising the flow under the car’s floor and along its flank.

Starting with the bargeboards, the row of fins that make up the front edge of the footplate have been modified quite extensively, with not only the number of fins increased but also their angle of attack (red arrow) has been altered.

Meanwhile, the outwardly angled fins atop them have been adjusted too, with the second row made into a trio of fins, rather than just a pair.

The really big and quite noticeable change comes in how Red Bull has optimised its deflector array, with each change resulting in a knock-on effect that has required the whole assembly to be reconfigured.

The forwardmost vertical deflector (highlighted in red) is now a two-piece affair, with a slot running almost the entire height of the element,.

It also connects with the front section of the floor’s axehead, rather than hovering over it and being attached to the outer section of the bargeboard.

This has resulted in the Venetian blind-like slats having to be overhauled too, with the ones connected to the forward deflector lengthened as a consequence (highlighted in blue).

To work the airflow harder further downstream, changes have also been made to the rearward vertical deflector, as where it previously hung over the floor it is now attached to it (extension highlighted in green).

This has resulted in what was previously the lowermost slat in the gentian blind panel being extended rearward too (highlighted in blue), whilst another full length slat has been added beneath (highlighted in yellow).

The pair of detached floor scrolls mounted on the edge of the floor behind this have also been revised, as they now meet with the angled floor strake to create a choke point. 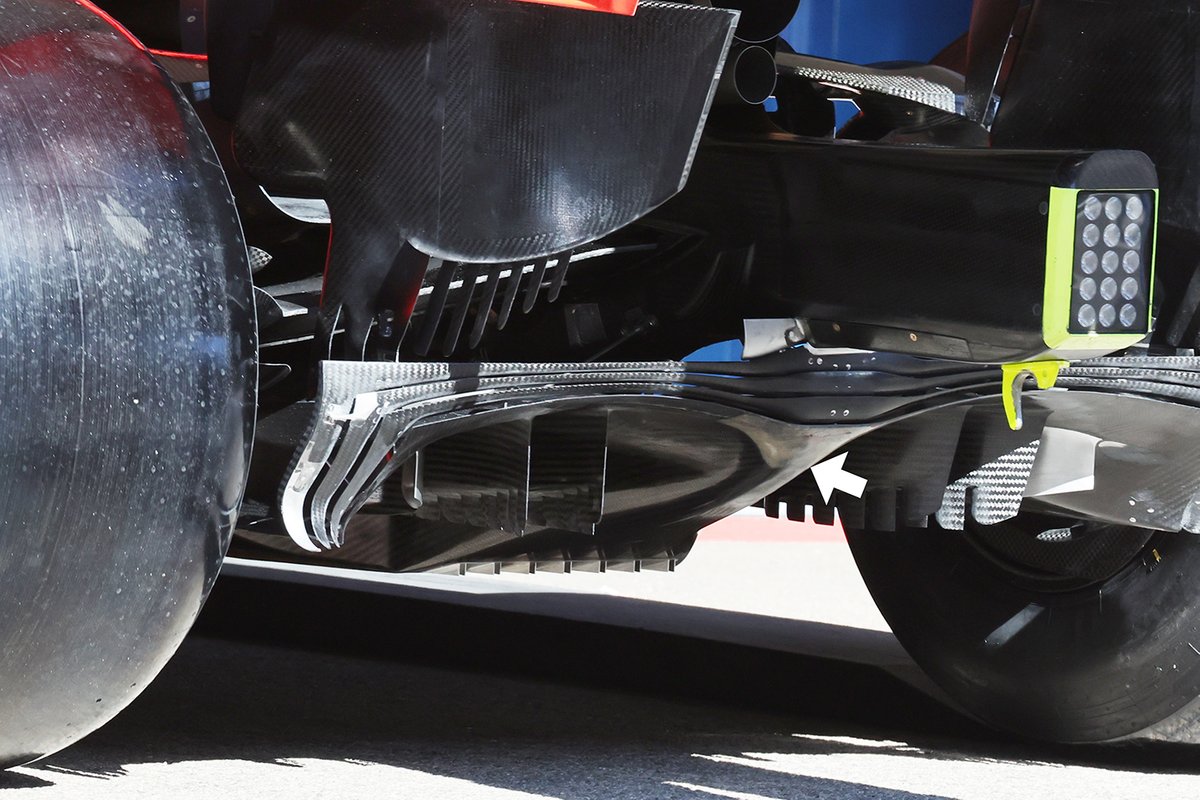 Red Bull has made a change to the central section of the diffuser too, narrowing the ramped section that leads up from the plank on the reference plane.

This narrower boat tail section of the diffuser will obviously open more room for the airflow under the car but also pinches the channel that’s created under the crash structure on the top of the floor.

Meanwhile, the Gurney-like extensions that run around the diffuser’s periphery have also been subtly amended, with the metal bridging support revised in order to handle the loads differently.

After the 2006 Formula 1 British GP, Lewis Hamilton's father Anthony was a frustrated man, despite his son - at the time a star in GP2 - had just scored a memorable double win in that weekend's feature and sprint events.

Pierre Gasly believes that that his AlphaTauri Formula 1 team has the “right tools” with which to solve its recent issues.

Zhou Guanyu says his focus lies with retaining his Formula 1 seat at Alfa Romeo for 2023 ahead of talks about his future after the summer break.