Ferrari’s Charles Leclerc pipped the Mercedes of Lewis Hamilton to set the pace in the final Formula 1 practice session before qualifying for the Austrian Grand Prix. 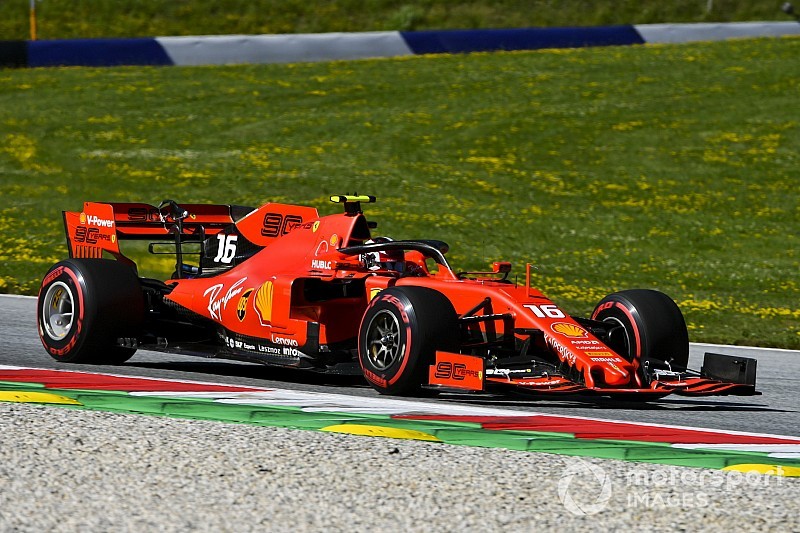 Leclerc was the only driver to lap below 1m04s at the Red Bull Ring as FP3 set up an enticing Ferrari vs Mercedes battle for pole position.

Bahrain poleman Leclerc had control of the 60-minute session throughout and enjoyed a comfortable advantage after the first runs.

His 1m04.275s left him almost four tenths clear of the lead Mercedes of Valtteri Bottas, who had a tiny advantage over Sebastian Vettel, Max Verstappen and Hamilton.

Bottas moved to the top of the times on his first flying lap on a second set of new soft tyres, eclipsing Leclerc’s time by half a tenth.

Hamilton lapped 0.010s slower than Leclerc initially but ended the session 0.143s behind after failing to improve again.

He was a tenth clear of Bottas, with the second Ferrari of Vettel 0.263s slower than his teammate in fourth.

Verstappen slipped to fifth in the lead Red Bull although did not hook up his best sectors.

He was 0.459s slower than Leclerc after failing to improve in the final part of the lap on his first new-tyre run, and then aborting a quicker lap shortly after – complaining that “the changes we made are not good”.

Verstappen’s Red Bull teammate Pierre Gasly had a troubled start to the session when he reported “really low power” and spent the opening phase of FP3 in the pits.

However, he emerged with enough time to completely two runs as normal, but ended up only seventh and 1.2s off the pace.

That gap allowed Lando Norris to split the Red Bulls in his McLaren, which was just within a second of Leclerc’s best – 0.999s off the pace.

His teammate Carlos Sainz Jr finished the session eighth-fastest, ahead of Antonio Giovinazzi’s Alfa Romeo and the Toro Rosso of Daniil Kvyat.

Half a second covered Sainz in eighth to Lance Stroll's Racing Point in 16th.

Haas endured a difficult session, with its cars 15th (Romain Grosjean) and 18th (Kevin Magnussen). The team also needs to change the gearbox on Magnussen's car before qualifying, which will hand the Dane a five-place grid penalty.