Giorgio Piola and Sutton Images bring you an update of the best technical images from the Barcelona pitlane and track action on the first day of Formula 1 testing in 2020. 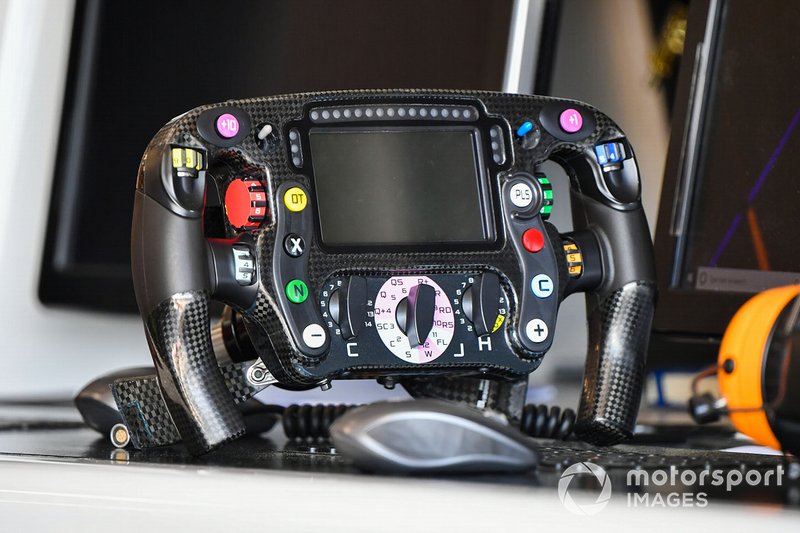 1/18
A look at the McLaren MCL35’s steering wheel, which gives us a great overview of the various buttons, switches and rotaries used to control the various power unit functions. 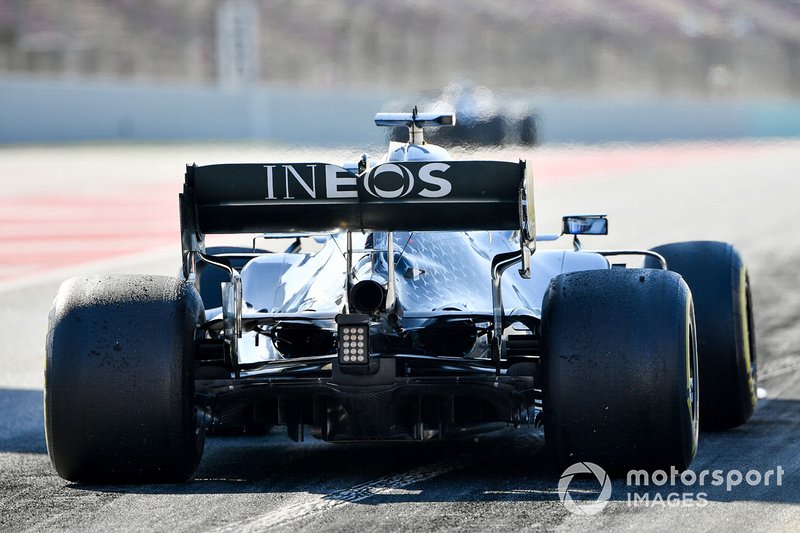 2/18
The rear end of the Mercedes W11 gives insight into this year's challenger. The packaging is tighter, including the narrow cooling outlet. Other novelties of note include the mid-wing that can be seen just popping out either side of the cooling outlet, with its downturned endplate. It’s also fascinating to see the lower winglets hanging down the side of the tyre. 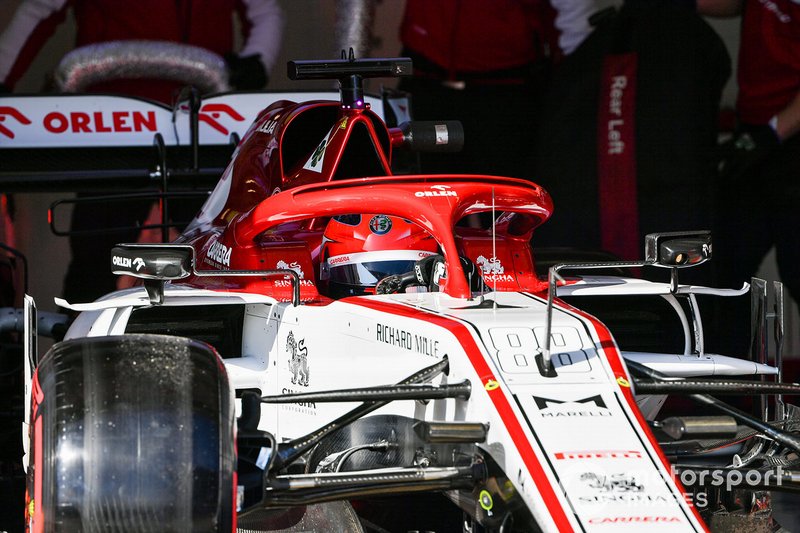 3/18
In this image we’re paying attention to the Alfa Romeo C39’s halo, which sports an integrated winglet, a design feature that we saw from a large collection of the teams in the first season but one that’s since become far less fashionable. 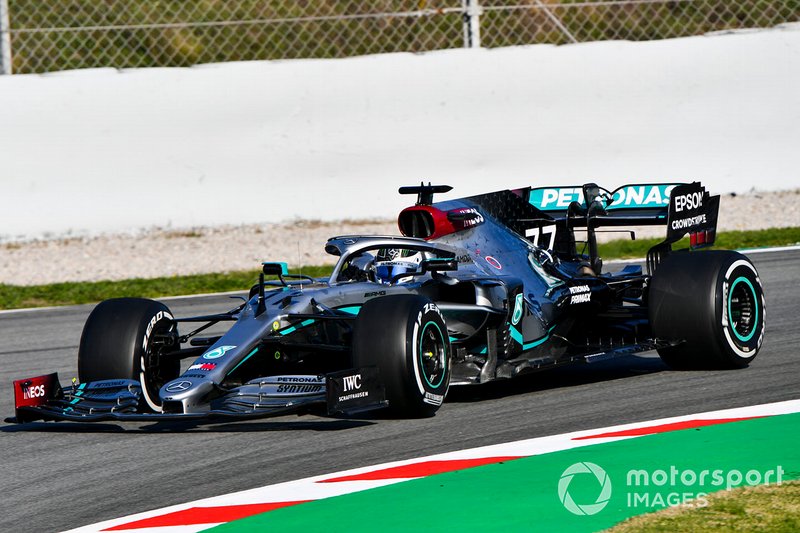 4/18
Bottas at the wheel of the Mercedes W11, just before the lunch break, and it’s worth noting the small line of kiel probes mounted on the floor around the entry to the ‘coke bottle’ region

The rear of the Racing Point RP20 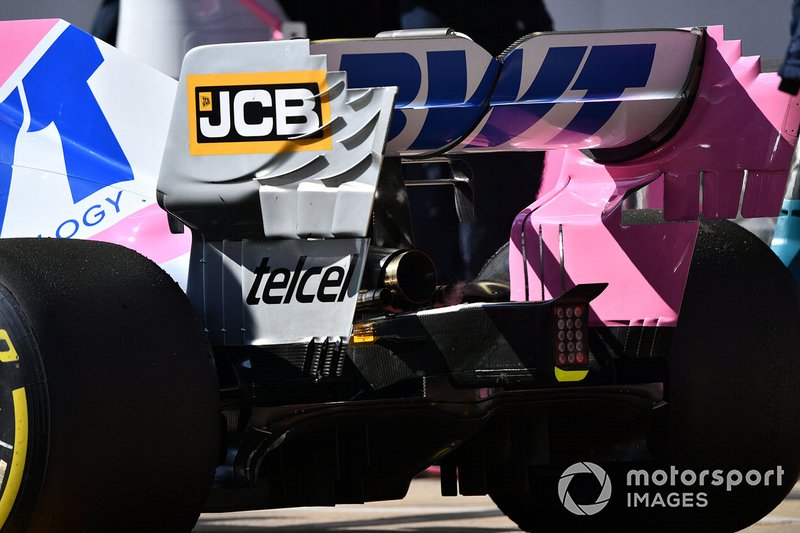 5/18
This close up of the Racing Point RP20’s rear wing shows the synergy of design between it and last year’s Mercedes, as it not only features the sawtooth-style upper rear cutout but also the paired upwash strakes, all of which are the result of the teams trying to reduce drag.

Nose detail of the Ferrari SF1000 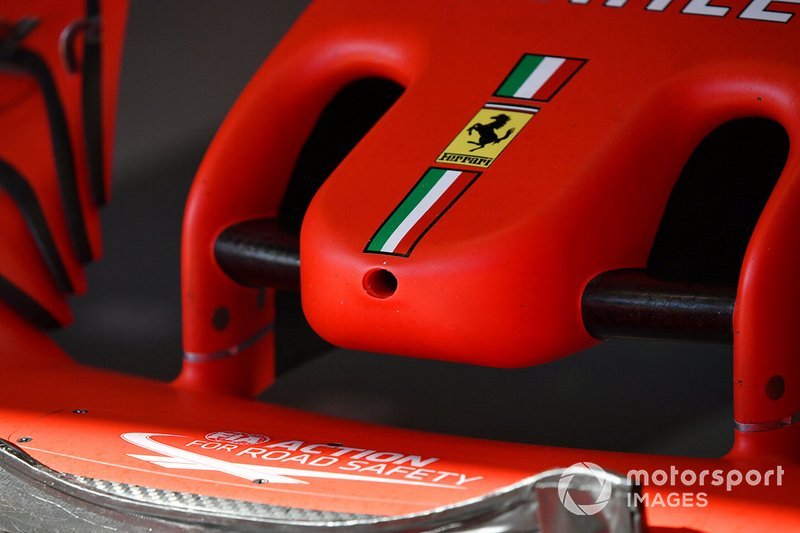 6/18
A close-up of the SF1000 nose tip and snowplow. Both have been redesigned and optimised in the wake of adding this solution during last year’s campaign. 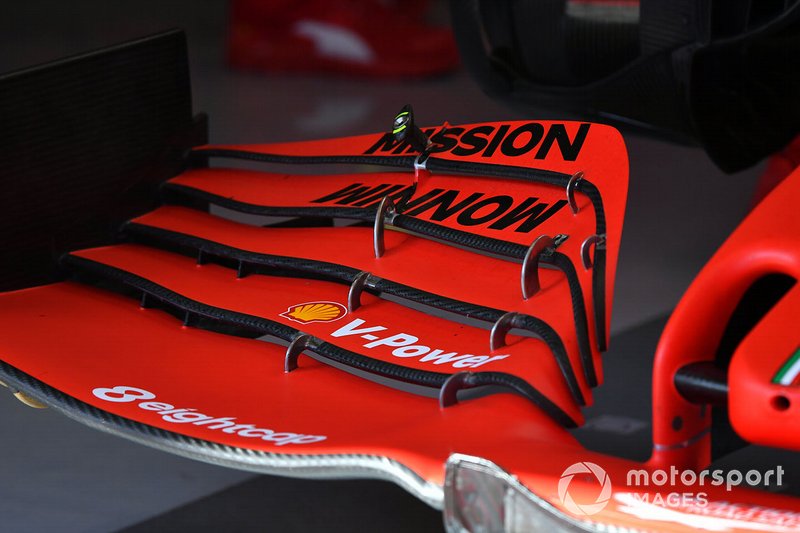 7/18
Ferrari's front wing may not look too dissimilar from the one sported last season but it has seen some delicate alterations to help improve performance. You’ll note a wavy trailing edge on the mainplane, something that’s mirrored on the all of the flaps above. A subtle geometric difference but one that’s born purely out of performance, as the Scuderia seeks to maximise stability at the front-end. 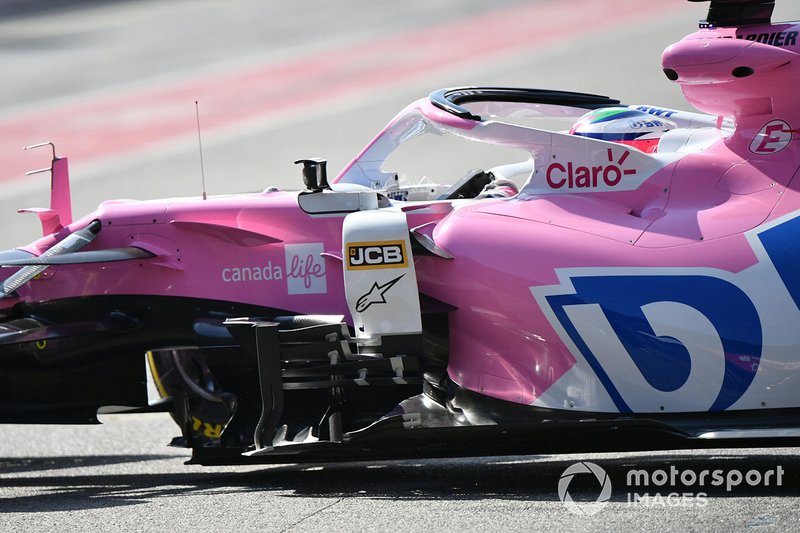 8/18
A fantastic view of the side of the RP20 and various aerodynamic appendages that fill the void between the front suspension and sidepods. A few details to note are the small downwash winglets below the upper wishbone, the detached and fluted floor scrolls below the main venetian blind-style deflector panels and the very obvious downwashing flow diverters placed between the sidepod and vertical deflector panel that manage flow around the sidepods. 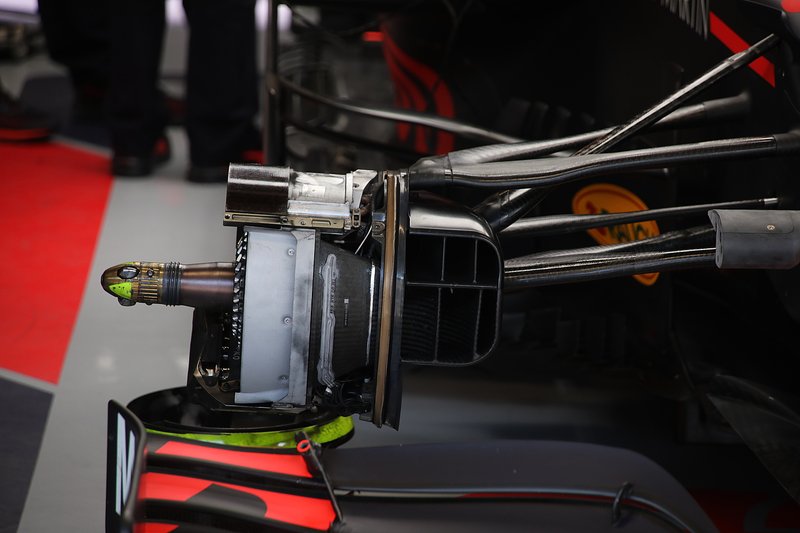 9/18
Red Bull’s front brake assembly in a state of disassembly affords us the opportunity to see how airflow taken in by the enlarged inlet is passed through the structure. 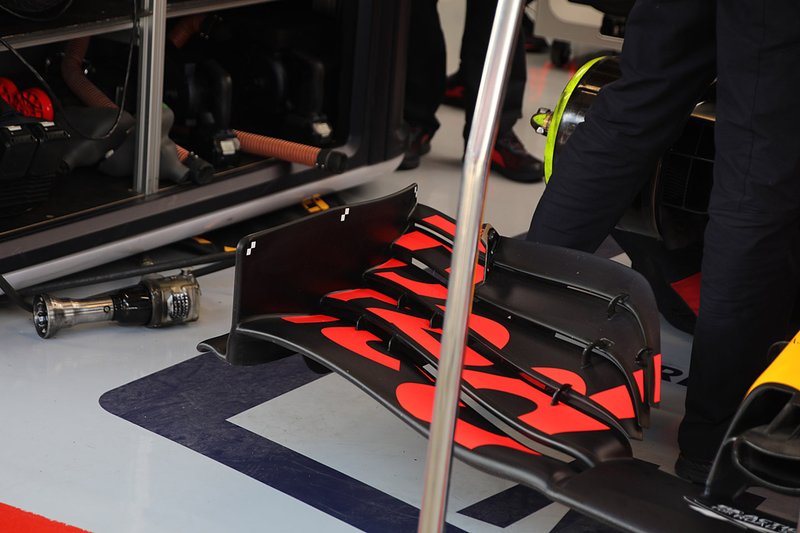 10/18
Red Bull conducts a front wing flex test, denoted by the use of small chequered stickers on the endplate to give a fixed reference point for a high-speed camera that will be focused on them capturing footage. 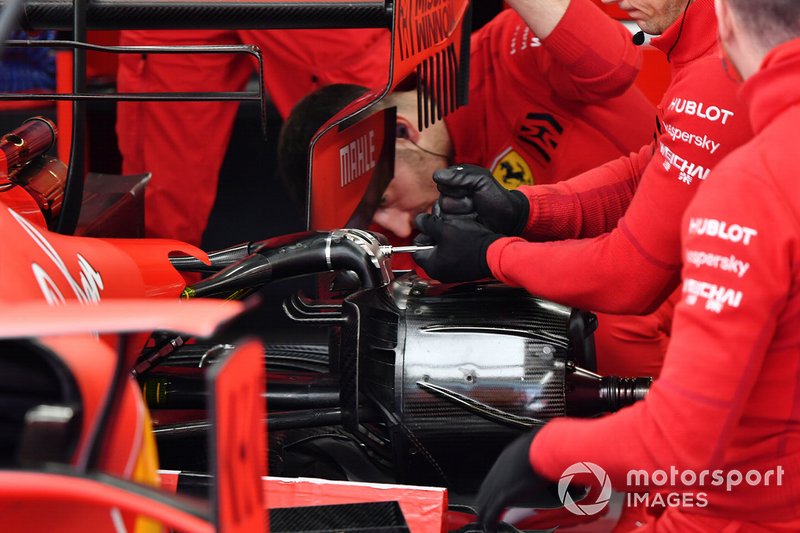 11/18
Ferrari mechanics make adjustments to the rear suspension on the SF1000, also note the various vanes on the brake drum which characterises the movement of airflow in the air gap between the wheel rim and the drum.

Front detail on the Renault R.S.20 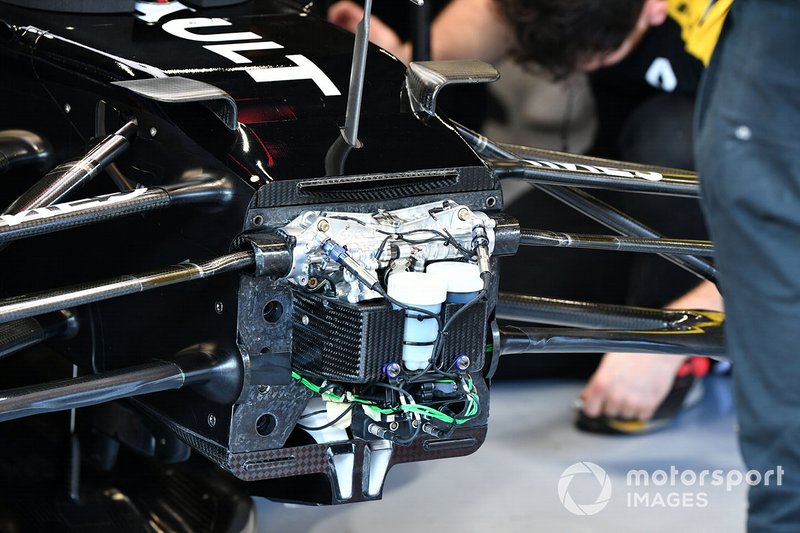 12/18
The Renault RS20 bulkhead, which features a keel-style design in order to better manage airflow beneath the car.

Brake detail on the Renault R.S.20 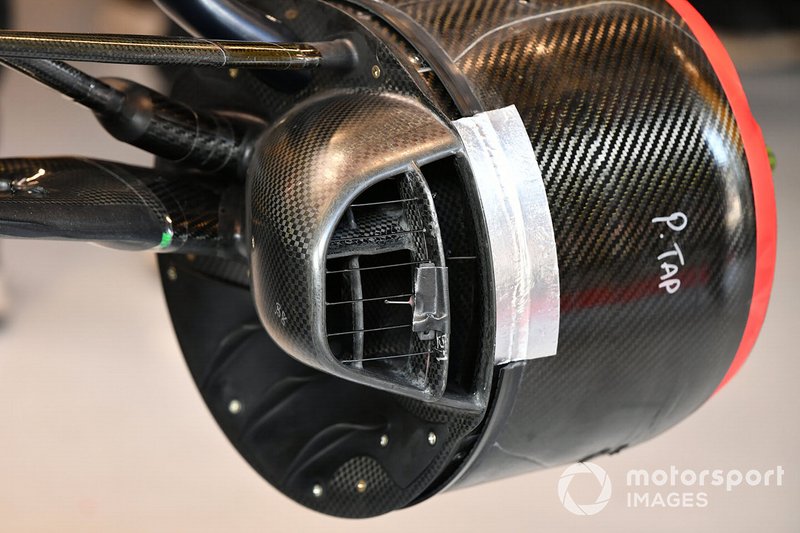 13/18
A close-up of the Renault RS20’s front brake duct reveals several details, including the use of mesh to prohibit the ingress of large pieces of debris into the duct, silver tape used to close off the vertical channel on the inside of the brake fence and also the little pitot tube taking measurements in the main inlet. 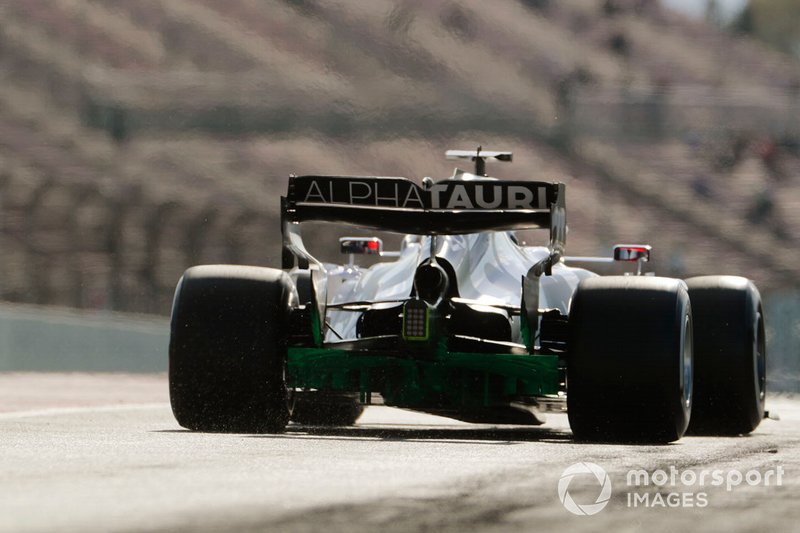 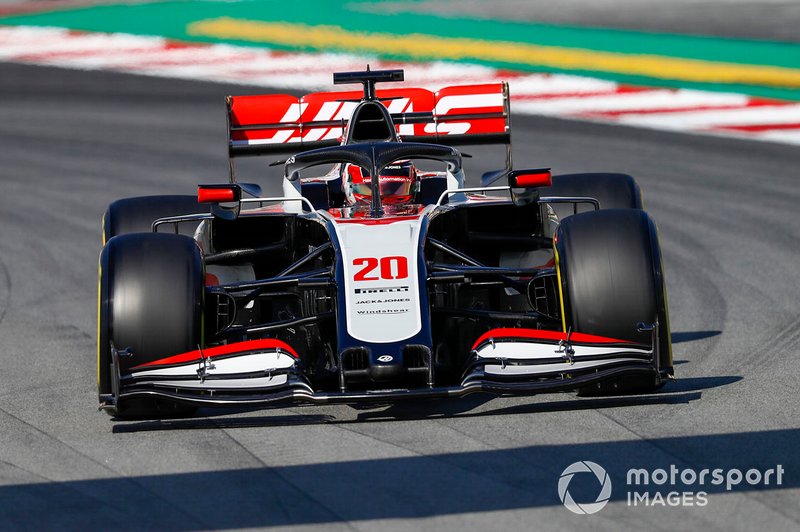 15/18
This angle gives us a good idea of how certain aspects of the Haas may interact with one another, for example, look at the way in which the T-Wing protrudes from the sides of the halo and may also ‘see’ the airflow in that way. 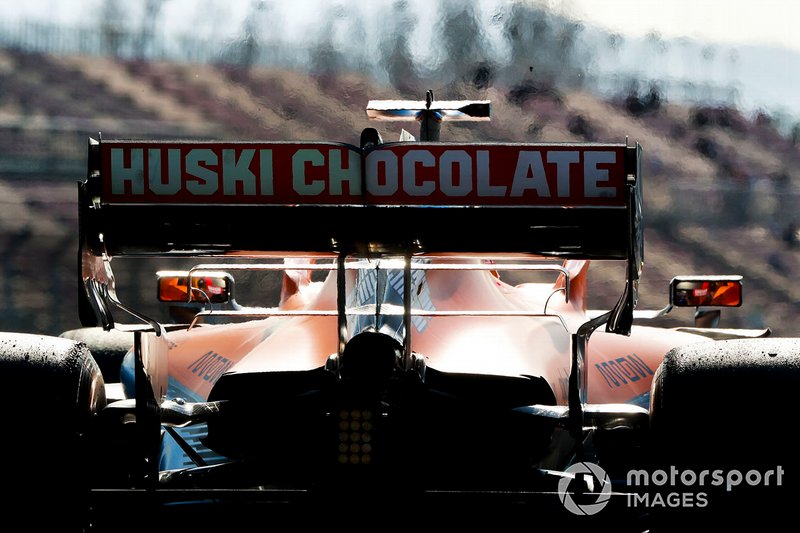 16/18
A close-up of the McLaren MCL35’s rear-end shows how the team has two slightly different T-Wings stacked on top of one another, with small supports used at the outboard section to help with stability. 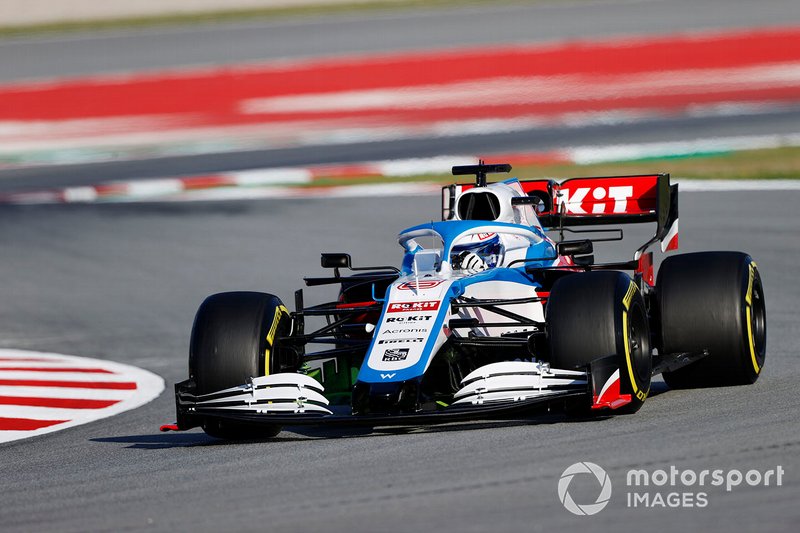 17/18
The Williams FW43 with flo-viz painted on the right-hand bargeboards, as the team looks for indications that what it saw back at the factory correlates with the real-world counterpart. 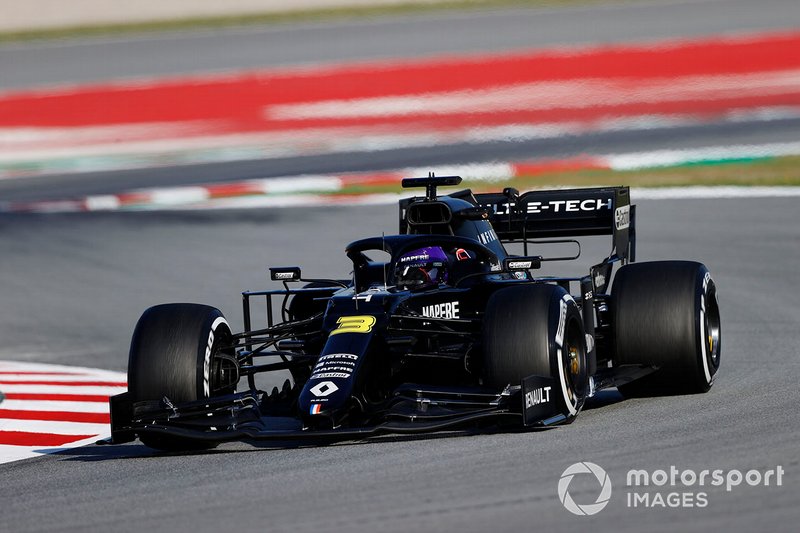 18/18
This angle of the Renault RS20 shows off its sleeker and domed nose and cape solution.