Over the past two races in North America, Rubens Barrichello has thrilled the crowds by taking the fight to his Scuderia Ferrari Marlboro team-mate, Michael Schumacher. While it was close in Canada, it was even closer in the USA, but once the German ...

Over the past two races in North America, Rubens Barrichello has thrilled the crowds by taking the fight to his Scuderia Ferrari Marlboro team-mate, Michael Schumacher. While it was close in Canada, it was even closer in the USA, but once the German slipstreamed past on the straight at the end of the first Safety Car period, it was always going to be a difficult task. 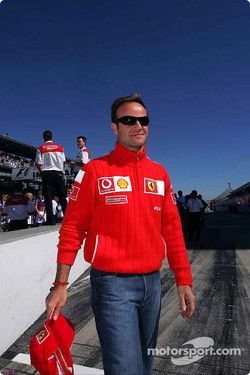 "Making that early pit stop during the second SC period was the right decision, even queuing behind Michael for the refuelling," recalled the Brazilian. "I lost 10 seconds more than him, but incredibly he got out in front of the field because they had gone so slowly, while I dropped several places. From then on my race was a recovery situation. I just relaxed, calmed down and began to attack again."

"It was a tremendous race, the car was good all weekend. I pushed all race long and even when I had more fuel than Michael I was able to do similar lap times to those he was doing before refuelling, so I knew I had a chance to catch him. But there are too many "ifs" and I guess it was just not to be this time."

While philosophical about the race result in Indianapolis, Barrichello has some criticism of the way the Safety Car was deployed after Ralf Schumacher's accident. "I think the organisers could have handled the situation better," he said.

"I know they don't like Red Flagging races anymore but the SC could have led us through the pit lane. This would have avoided the risk of picking up debris and also having to drive past Ralf's car. It was like driving past an accident on the motorway and in fact I nearly crashed into the car in front once trying to see if Ralf was okay. I felt so bad, so I cannot really imagine how Michael must have been feeling. I didn't like the situation."

Barrichello attributes his improvement in pace over the last couple of races to modifications to his driving style. Like most drivers who began their careers in karts, the Ferrari man used to left foot brake, but changed to his right foot, as racing cars used to have a clutch pedal.

"Since the first time I drove F1 I switched to right foot braking which is what everyone did at the time," he explained. "Around 1994 to '95 when left foot braking came in, I tried it but did not like it that much and had problems with it, so went back to right foot braking. Then, this year I tried using my left foot again. I felt good about it and I raced like this for the first three or four races of this season. But then, I got the impression I was not really on the pace and began to doubt this style of braking."

"When you doubt something it becomes unclear, so I decided to try going back to the right foot. Now, I am back to setting up the car better for myself and I am using my left foot more than in the past. I had a very good test at Silverstone before the race in Canada, so it put me into a stronger phase and I found something better in terms of how to set up the car and how to drive."

Mansell to drive Jordan in London

Anything can happen says Schumacher