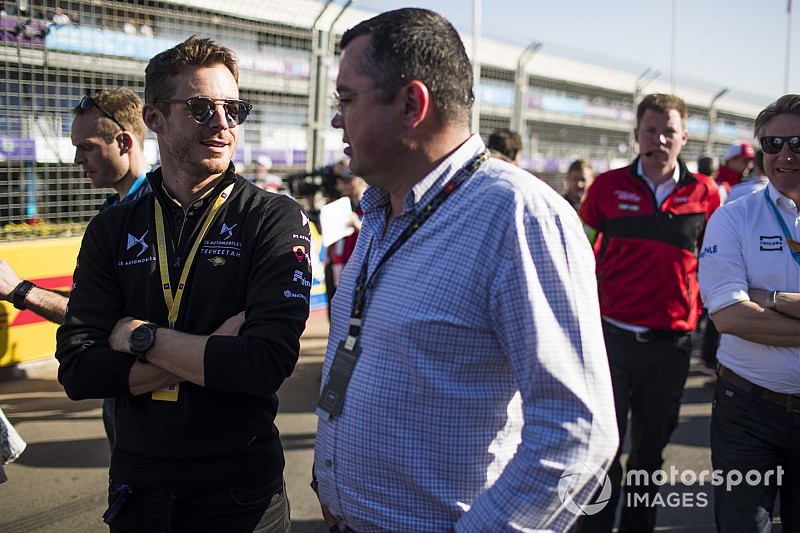 Ex-McLaren Formula 1 chief Eric Boullier says aiming for "something different" pushed him towards his new French Grand Prix role, because he was not "desperate" to stay in the paddock.

Boullier returned to the F1 paddock on Tuesday at the start of the second week of pre-season testing, his first appearance since resigning as McLaren's racing director last summer.

The Frenchman has taken a "strategic advisor" and global ambassador role for the French GP, which returned to the calendar last season at Paul Ricard.

Asked by Motorsport.com why he focused on his new role instead of trying to return in a team capacity, the ex-Renault, Lotus and McLaren man said he was keen to grasp the opportunity to "work with great people" having been part of the project's "origin".

"So, when they called me and asked if I wanted to rejoin, to continue the story, that was something I wanted to consider," said Boullier.

"It's not that I've done everything, but why not? Maybe I can come back one day. I think at that stage of my career I wanted to focus on maybe something different.

"And I can guarantee you, there's life outside the paddock."

Boullier was team principal at Renault and Lotus before assuming his racing director role at McLaren, where he spent four seasons.

French GP managing director Gilles Dufeigneux said he didn't want to miss the "huge opportunity" to get Boullier into the team.

"I remember 10 years ago when we started with the prime minister to have this idea of organizing F1 back in France, everyone was telling us for F1 to be a success in France you need pilots, teams, expertise, broadcasters," said Dufeigneux.

"We didn't have anything in this spectrum. Now, we have Eric, we have [Renault managing director] Cyril Abiteboul, [Alfa Romeo team principal] Frederic Vasseur, [drivers] Romain Grosjean, Pierre Gasly, and from Monaco, Charles Leclerc.

"It's part of the family. We've got expertise everywhere in Formula 1. He was free on the market, so we did not lose this opportunity to call Eric."

The return of the French GP in 2018 was marred by huge traffic problems, which have been targeted as the number one priority by the organisers.

Boullier said he was "not trying to bullshit anyone" when he called the race a "success", which he wants to establish for the long term.

"My role is to try to bring connection and clarity between all the parties and actors – the teams, drivers, Formula One Management," he said.

"It's important to have a dialogue with them.

"There are various business models for promoters, so we just want to make the one we have [suitable] for the future just to guarantee the long-term success."