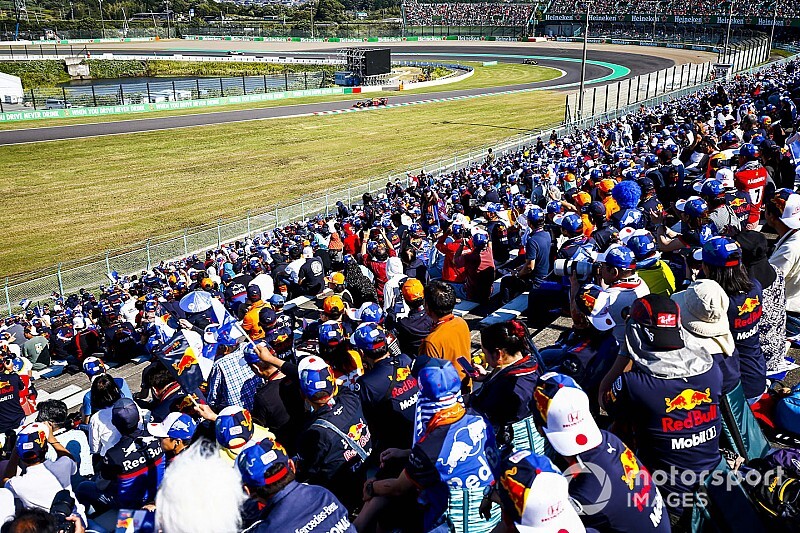 The F1 organisation and the FIA have been studying the format for some time, with the aim of allowing team members to arrive later at the circuit, thus reducing the burden of a 22-race calendar that is expected to expand further.

However, Brawn insists that won’t include putting qualifying on Sunday mornings on a permanent basis, despite many drivers expressing support for the format after Typhoon Hagibis caused the cancellation of Suzuka track action on Saturday.

One of the key issues is that race promoters want a busy programme on Friday so that they can sell tickets.

“It was a Super Sunday in Suzuka and that naturally reopened the debate about the shape of an F1 weekend,” said Brawn in his F1 column. “This is an aspect of the sport we have focused on in some detail as we work towards the rules that will govern F1 over the coming years and we have taken into account the voices of all of the key players – the promoters, the teams and last but not least the fans.

“I’ll be honest and say that there has been strong consensus, especially among the organisers, for maintaining the three-day format of track activity, although with a different timetable.

“It's true that a day like Sunday in Suzuka offers a great show in just a few hours but it would confine the feeder series races to the previous days.

“After careful analysis we have concluded that the best solution is to keep the event over three days, revising the Friday format but leaving the rest untouched, with qualifying on Saturday and the race on Sunday.”

Efforts have instead focussed on areas such as timing of scrutineering and curfews on Thursday and Friday.

Brawn noted: “In order to meet the demands of the teams and in order to slightly increase the number of Grands Prix, which will be at 22 next year, we have given consideration to reorganising the schedule so that teams and drivers can arrive a day later.

“We’ll talk about the detail at the end of the month, when the new regulations will be published.”

Although the enforced compact format used at Suzuka worked well, team bosses are not keen on repeating it.

“I think it worked in circumstance we had it was a good fix to the problem,” Haas team boss Gunther Steiner told Motorsport.com. “If you want to go there, if this would be an idea to do it consistently, I would say no.

“If you imagine the person sitting at home watching in the morning, in the normal European time - in the morning watching qualifying, and in the afternoon watching racing. How many times you do that to use up all your Sunday for the two of them?”

“They would just get an overload in one day, and in the end we would lose half of the people either in qualifying or in race, you know. Very few people would stay at home for one day complete to watch F1 in the beginning in the morning and then in the afternoon.”

Racing Point’s Otmar Szafnauer said he would prefer a compact weekend – but with no Friday running and qualifying staying on Saturday.

“I personally think that if we end up with 22, 23, 24 races it would be better for us to compact it into two days, Saturday/Sunday,” he said. “I don’t see the contracts that FOM do, but they keep saying we need a three-day weekend for the promoters.

“But when you look around the stands often Fridays are not full. Fans work on Fridays, kids go to school on Fridays, even TV audiences are about a tenth of what we have on Saturday and Sunday.

“So if we have more races I’d be in favour of packing the whole weekend into Saturday and Sunday, so the mechanics can come out a day later. We could have a couple of practice sessions and qualifying on Saturday, so that’s three sessions, and on Sunday you race.

“What you really want is for the mechanics and engineers to be able to leave home a day later. If that’s the case then you save 25 days if you have a 25-race calendar, and that’s significant.”