The Formula 1 organisation wants get all 10 teams on board for the second Netflix series about the sport, which is currently in the planning stages.

The first series of Formula 1: Drive to Survive is launched worldwide on the streaming service on Friday.

Originally only eight teams agreed to be fully involved, with Ferrari and Mercedes opting out when filming commenced at Barcelona pre-season testing last year.

However, by the end of the season the Italian team had relented and did grant some access, allowing the Scuderia to be featured more later in the series.

F1 is now in negotiation with all the teams over the second series. Despite it not yet being fully signed off, production company Box to Box made a head start by undertaking some filming at the Barcelona test, and its cameras will also be present in Australia.

F1’s head of motorsport Ross Brawn believes that all teams will come to understand the value of being involved in such promotional activities.

“I think this sport is able to grow, and it will grow quicker if all the teams are part of that process, there's no doubt,” he said.

“I think the teams are starting to recognise that their involvement is not just on the track, there's an involvement in everywhere we can improve the sport.

Speaking at a launch event for the series, at which he saw the first two episodes for the first time, Brawn stressed that fans wanted to know more about the people involved in the sport.

“I think in a way what you've seen tonight is an indication of the way we're going," he said. "This is an example of the changes that are coming in F1.

"The human side has always been fascinating and all of us have been involved in that side.

“Certainly now I'm away from a team I've felt that that would be a fascinating story because there is so much emotion of the whole team – the individuals, the mechanics, the engineers, the family.

"I know from my own family how much they suffer and how much pleasure they get on both sides. And you could see that in the film.

“There’s a fascination in why these guys are so special. What is it that makes them exceptional. I think in both those episodes we saw different aspects of F1.

"I particularly liked the second one – the [Carlos] Sainz and [Fernando] Alonso chemistry that was there. Those are things that you just don't necessarily see or feel.”

F1’s head of marketing Ellie Norman confirmed that the second series was still being discussed with the teams.

“Conversations are happening at the moment with all of the teams with regards to filming of Season 2,” she said.

“Box to Box were filming in Barcelona testing and they will be in Melbourne, and obviously we would love to have all teams involved and signed up.

“We've just started the conversations with the teams, and that does take time. I think Netflix have real confidence in the first one, so they put the funding up for Box to Box to cover the filming from testing and within Melbourne as well. We haven't set a deadline.”

Norman acknowledged that Lewis Hamilton’s busy schedule made it hard for him to commit to the project.

“Part of it was taking the Netflix opportunity to all the teams, and we understand and appreciate that if they're looking at a schedule, and they've got other activities going on," she said.

"I think particularly Mercedes have an awful lot going on with a driver who is into fashion, into music – it was just too much for them to take on at that time.” 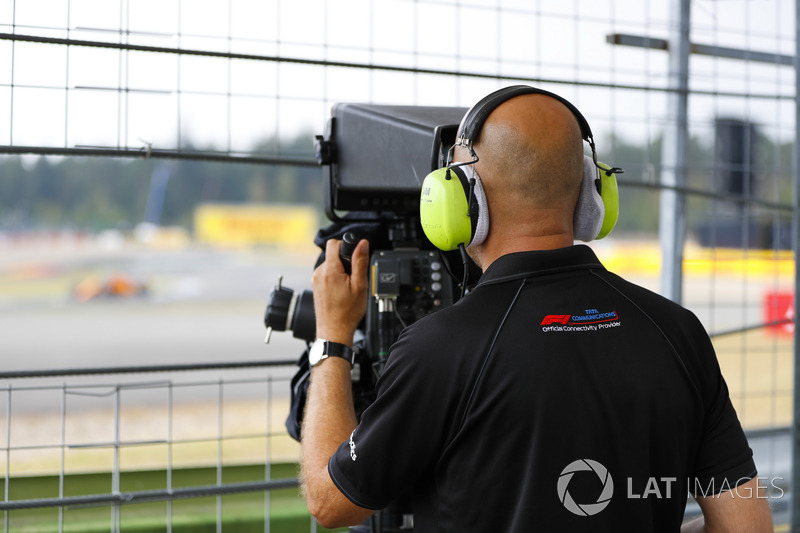 A TV cameraman at work