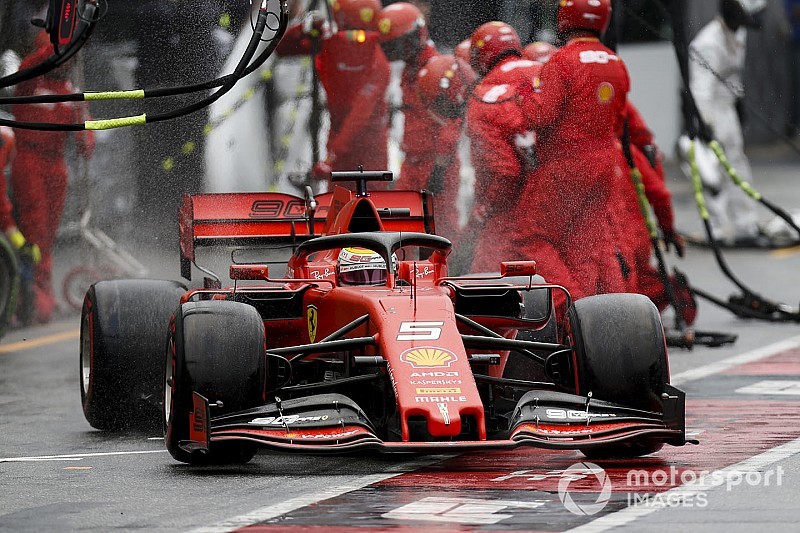 The FIA will impose time penalties for unsafe releases at pitstops from now on, Motorsport.com can reveal, following the controversy over the Charles Leclerc incident at the German Grand Prix.

During the first round of stops at Hockenheim, Leclerc was released by Ferrari in to the path of Romain Grosjean – forcing the Haas driver to hit the brakes and subsequently costing him positions.

But rather than Leclerc being given a time-penalty for what happened, the stewards elected to hand Ferrari a 5000 euro fine instead.

That sanction prompted unease from rivals, who feared that it would open up a precedent for teams to take more risks at pit stops over releasing drivers, because a fine for getting it wrong was not felt to be a big enough deterrent.

It has emerged that the matter was discussed during Thursday afternoon's team manager's meeting with the FIA ahead of the Hungarian Grand Prix, and there was a unanimous request for time penalties to be deemed as the only acceptable punishment.

Following discussions, the FIA accepted the concerns of teams that fines were not enough of a deterrent and it was agreed that from now on, if there is an unsafe release, then there will be a time penalty.

That decision will quell unhappiness in the pitlane about what happened last weekend, with Max Verstappen in particular having been upset about the matter.

Verstappen had been given a time penalty earlier this year for an unsafe release at the Monaco Grand Prix, when he was released into the path of Valtteri Bottas and the pair collided.

"It is completely wrong of course," said Verstappen, when asked by Motorsport.com about the Ferrari fine.

"If they will get a fine then everybody will do it. I think it is not fair and to say that they gave me that penalty [in Monaco] only because we touched, that is also not fair.

"You are still releasing the car knowing there is a car in the fast lane, and if it's just a fine – it is unfair."

Speaking about the size of the fine Ferrari was given, Verstappen said: "That is peanuts for a team. They really don't care to pay that. So I think it is completely wrong to do that, especially if you talk about safety. It is not correct."