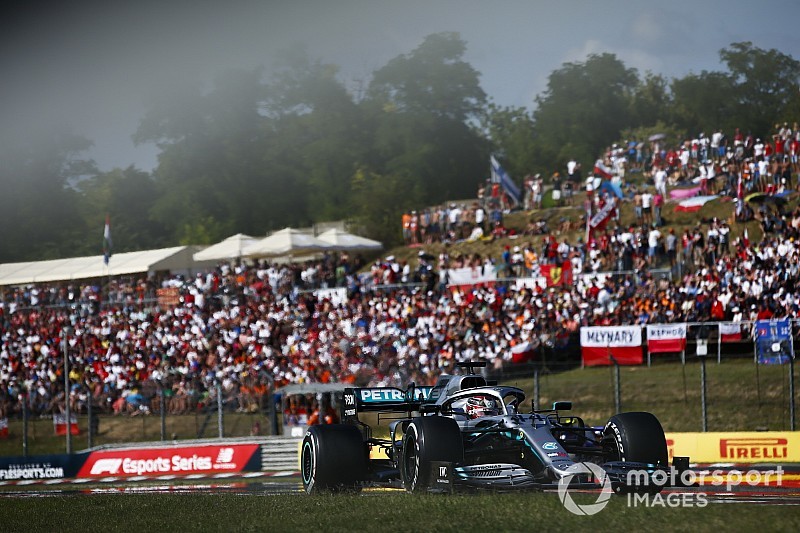 Hamilton spent the majority of his first and second stints bottled up behind polesitter Max Verstappen, and midway through the 70-lap race - after two failed attempts to pass Verstappen - was asked to back off in order to stabilise his brake wear.

Asked by Motorsport.com what made Mercedes think that call would work, Wolff said: "It was a brilliant execution by the strategy team.

"But then they reacted in the right way and all the learnings we took from Hockenheim with the radio discipline and the protocol that the strategists in the background would come up with options and then [Mercedes strategist] James Vowles would be evaluating them and then all of us giving our opinions.

"By this point Lewis was catching up to Max and it looked like he could overtake him on the hard tyre but we were too marginal on the brakes and we couldn’t continue to follow him in that way.

"So they only option to avoid P2 was to take a risk in the hope that the medium tyre would create an offset.

"At first it didn’t seem very good but from then on the moment Lewis sniffed the opportunity there was no going back."

Hamilton questioned the decision to pit for a second time on more than one occasion over the team radio during the race, and Wolff admitted such a strategy "seemed uncompetitive" when Mercedes had discussed it plan on Sunday morning.

Asked to explain how long the decision to switch to a two-stop had taken, and whether that process had compromised the strategy of Valtteri Bottas - who was eighth and also stopped twice after picking up damage on the opening lap - Wolff said "it was a debate over seven laps".

"We discussed it from lap 40 to lap 47, we discussed whether to pit and how to surprise Red Bull," he said. "And obviously, you are a bit biased - if you can win the race with one car, lots of brainwork goes into optimising that strategy.

"With Valtteri, I don't think it would have changed a lot. He was trapped in the gaggle of cars, he was struggling to overtake these guys.

"And it is clear that in that moment the objective of the team, and that's transparent to both drivers, is that we will always optimise a race win.

"But it doesn't mean that we have compromised Valtteri in whatsoever way."

Speaking about his brake management efforts, Hamilton said he "had to change my driving style to enable the brake to go down in temperature".

"It means just doing a lot less braking and much much shorter bursts of braking, and then in a lot of other places I wasn't really touching the brake," he explained.

"So it really changes the balance of the car as well. I'm really proud of how I was able to delegate my work throughout that, and collectively with the team we did a really exceptional job."