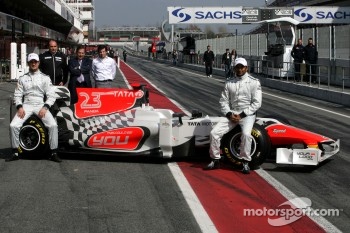 With Mr Jose Ramon Carabante at the head of the Team and Colin Kolles as Team Principal, Hispania Racing Team-HRT F1 Team joined its first Formula 1 season in 2010 as the first ever Spanish Formula 1 team, with Bruno Senna, Karun Chandhok, Sakon Yamamoto and Christian Klien as drivers.

After a difficult start in Bahrain due to lack of testing, the team steadily increased reliability by completing its first race-distance with one car at the second round in Australia, and with both cars at the third round in Malaysia. Several race-finishes, 9 double finishes (being the most double finishes of any of the new teams), with an improved level of performance (including a best qualifying position in P14 at the Australian, Monaco and Korean Grand Prix), allowed Hispania Racing to finish in 11th place in the constructors World Championship.

Therefore, we faced the 2010 season as a big challenge. We were not only thinking about being on the grid for the first Grand prix of the season, but also finishing the 19 GP's of the F1 World championship. And we did it.

The challenge for this 2011 season is different: to improve both on the track and off it, with the aim of still being one big team. We want to be competitive, but above all, to be close to people, approachable and socially responsible.

The expectations for 2011 are to keep improving steadily, with Narain Karthikeyan and Vitantonio Liuzzi driving the F111, the first own-built car by Hispania Racing.

Jose Ramon Carabante, President: "I'm very proud of the hard work done by the team. This car is born out of the work done by a large number of people who form this team, Hispania Racing, the first ever Spanish team in Formula 1 history. The design is innovative and futuristic, it catches your eye, but we mustn't forget that it is also a step forwards in technical terms. I'm sure that the F111 will bring much joy to those who believe and always have believed in the growth of this team. I can't wait for the season to begin, the second in our short yet intense history in Formula 1".

Colin Kolles, Team Principal: "It's been a tough winter but we've managed to have a new car in a very short time. The new car is definitely better than last year's one and I hope that we will make further progress this year. We will have a better package aerodynamically and mechanically than in 2010".

For this 2011 season, Hispania Racing will launch the F111. The new car has been developed by our own group of engineers and designers under the technical leadership of Geoff Willis and Chief Designer Paul White.

World renowned vehicle concept designer and visionary illustrator, Daniel Simon, is responsible for the graphic design of the F111. Daniel is considered one of the most imaginative and adventurous designers in both Hollywood and the motor industry. Although he and his label, Cosmic Motors, live mostly in the future, he also has a strong passion for motor racing's bold iconic liveries from the past, and has drawn inspiration from them in creating Hispania Racing's new livery. That distinct "Cosmic Motors" look brings together racing spirit and commercial reality, blending the dual requirements in a seamless, but attractive manner, which reflects the motivated vibe of the Hispania Racing team as it enters its second Formula 1 season.

Hispania Racing's first Formula One season produced many challenges which tested the team's determination and imagination, qualities that resonated with Daniel Simon, "Being offered a blank canvas by Hispania Racing and with it the opportunity to bring to life elements of Cosmic Motors, was something I just couldn't pass up. It's been an exciting journey as Hispania Racing evolves and grows. I missed fearless visual statements and large beautiful numbers on today's racing cars. Playing with the restrictions of what you can do to a complex F1 body is fun. There are many don'ts, but I found a way to lay courageous racing essence on the car."

Colin Kolles, Team Principal, outlines the improvement of the new car: "The F111 represents a significant step forward for Hispania Racing. We have made a big improvement for our second season in Formula 1 and what you see in our new car confirms Hispania Racing's commitment to F1."

Geoff Willis, Technical Director: "Starting the programme to develop the F111 has been an enormous challenge. The group of engineers working from many separate locations had to produce the 2011 HRT chassis to meet the new regulations, package the Williams LG14 transmission, design all new rear suspension to suit and develop a complete aero package. Given the tight time frame, I am very impressed with the result and the enormous efforts everyone has put in to achieve the objective. However we have to be realistic in our expectations of performance; this is very much a baseline car which the team must develop in 2011."