Do you know how heavy an F1 tyre is and what all the different sidewall colours mean? Find out that and more here…

Tyres are the most important – and arguably most confusing – part of modern Grand Prix racing. Teams are allocated different sets to use at different times and managing the process involves a big team of people.

It wasn’t always this complicated – but the introduction of a wide range of different tyre types has revolutionised the sport, making it a complex game of strategy. Here, we explore what goes into getting that right.

Pirelli is the current supplier and has been since 2011. The Italian company took over from Bridgestone, which had been the sole supplier since its competitor Michelin quit the sport in 2007.

F1 has had a single tyre supplier since 2007, when the FIA decided to restrict competition to prevent escalating costs and help reduce performance gaps between different teams.

When Pirelli arrived in F1 the company was asked to deliberately design tyres that would not last a full race. The idea was to force teams to make more pit stops (without the dangers of refuelling) and make the racing less predictable.

New regulations were introduced in 2017, and tweaks have been made since then, with the latest changes to a stiffer construction done this year to make the tyres stronger and more durable.

What types of tyres are there and what do the different colours mean? 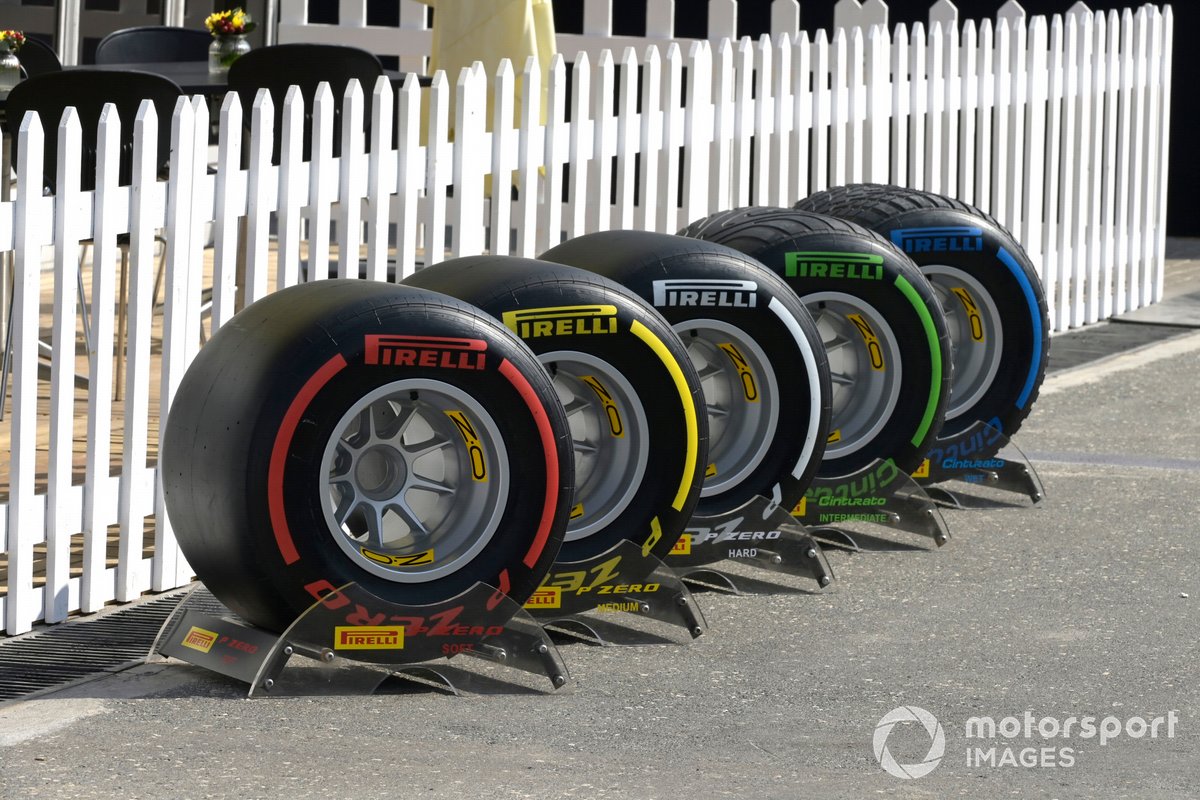 Pirelli has developed five different tyre specifications for F1, which are designated C1 to C5. The C1 the hardest and the C5 is the softest. There are also two types of rain tyre: intermediates and full wets.

THREE of the five types of dry-weather tyre are allocated for use at each event, and the teams are told this a few weeks in advance. They are then colour coded with the hardest of the three given a white stripe and lettering on the side, the medium given yellow and the softest red.

Intermediate and wet tyres are also taken to every event – even in the Middle East, where it is highly unlikely to rain – and these are colour coded green for ‘inters’ and blue for full wets.

How big are F1 tyres and what do they weigh?

F1 cars have run 13-inch wheels rims for years, with the diameter of the tyre and rim combination measuring 26.4 inches (67cm). The fronts are 30.5cm wide and the rears are 40.5cm, with intermediates 5cm wider and full wets 10cm wider.

From 2022, the rim size will increase to 18 inches (45.7cm) but the tyre and rim diameter will only go up to 28.3 inches (72cm). The lower profile design will change the way the cars behave on track, in theory making them even more responsive to changes of direction.

Excluding the wheel rims, the front and rear tyres weigh 9.5kg and 11.5kg respectively – about 1.5 times the weight of a bowling ball.

What is a tyre made of?

Tyres a constructed using a mix of natural and synthetic rubber and artificial fibres. They consist of a bead wire, a carcass, a belt and the outer tread and once fitted to the rim they are filled with a nitrogen gas, as it remains more stable with varying temperatures.

The bead is a thick, inflexible section in the innermost part of the tyre. It contains fibres and ridges that are designed to grip to the rim. The carcass encompasses the sidewall, which made only of rubber and will flex under high load, and the outer surface, which must be durable. The belt, which wraps around the carcass, makes the tyre rigid and is covered with the outer compound, which is around half a centimetre thick and is the part that grips to the road but also wears down.

Why do dry F1 tyres not have any tread? 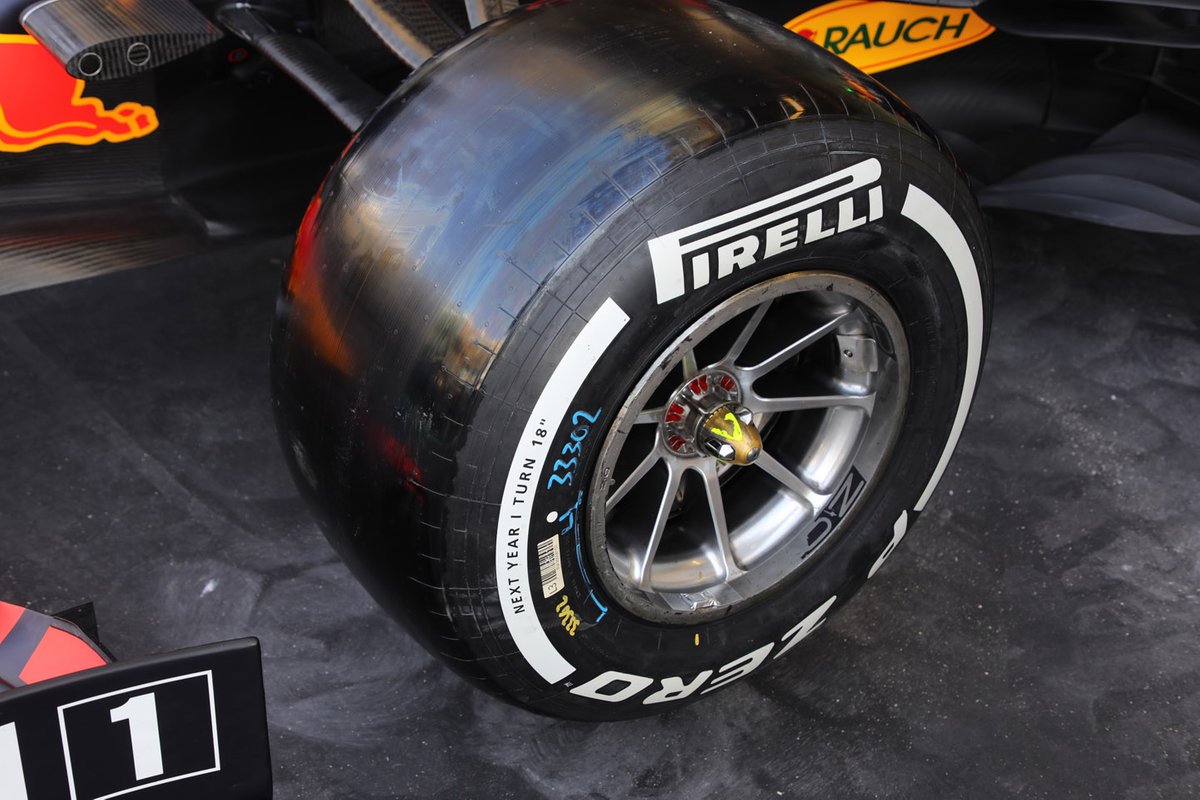 Slick tyres, with no tread pattern, first appeared in F1 in 1971 and all dry tyres are made this way. That is because it creates the biggest contact patch between the tyre and the ground. Grooves are actually only used to help steer water away, so when it’s wet there’s no need for them – and the more tyre that is in contact with the racetrack, the more grip it can provide.

F1 did re-introduce grooved dry tyres in 1998 – but only to slow the cars down. Each tyre had a set of circumferential grooves around it, which did nothing to remove water but just reduced the total amount of rubber in contact with the track. They did the job – but were scrapped in 2009 when slicks came back.

Rain tyres do have grooves, with the intermediates – or ‘inters’ – given a shallower groove than the full wets. Inters are used on wet or drying circuits, with each tyre shifting 30 litres of water per second compared to the full wet’s 85 litres, which makes it more resistant to aquaplaning in heavy rain. The compounds are different too – the inter lasts longer on a moist track, whereas the full wet needs to stay wet to avoid overheating.

The level of grip the tyre creates depends on the formulation of the compound that makes up the tyre surface. Every tyre is made using a different recipe of rubber, and choosing between softer and harder tyres is all about the balance between durability (or degradation) and speed.

The hard C1 tyre is good for tracks with fast corners, abrasive surfaces or high ambient temperatures. It takes longer to warm up and get grippy but is super durable and can handle the tough stuff for longer. The mid-range C3 is the most widely used tyre, while the C5 is the fastest, suitable for tighter, twistier circuits and times – like qualifying – when the focus is on peak performance rather than wear, because it only lasts a handful of laps.

What tyres do teams get to use when? 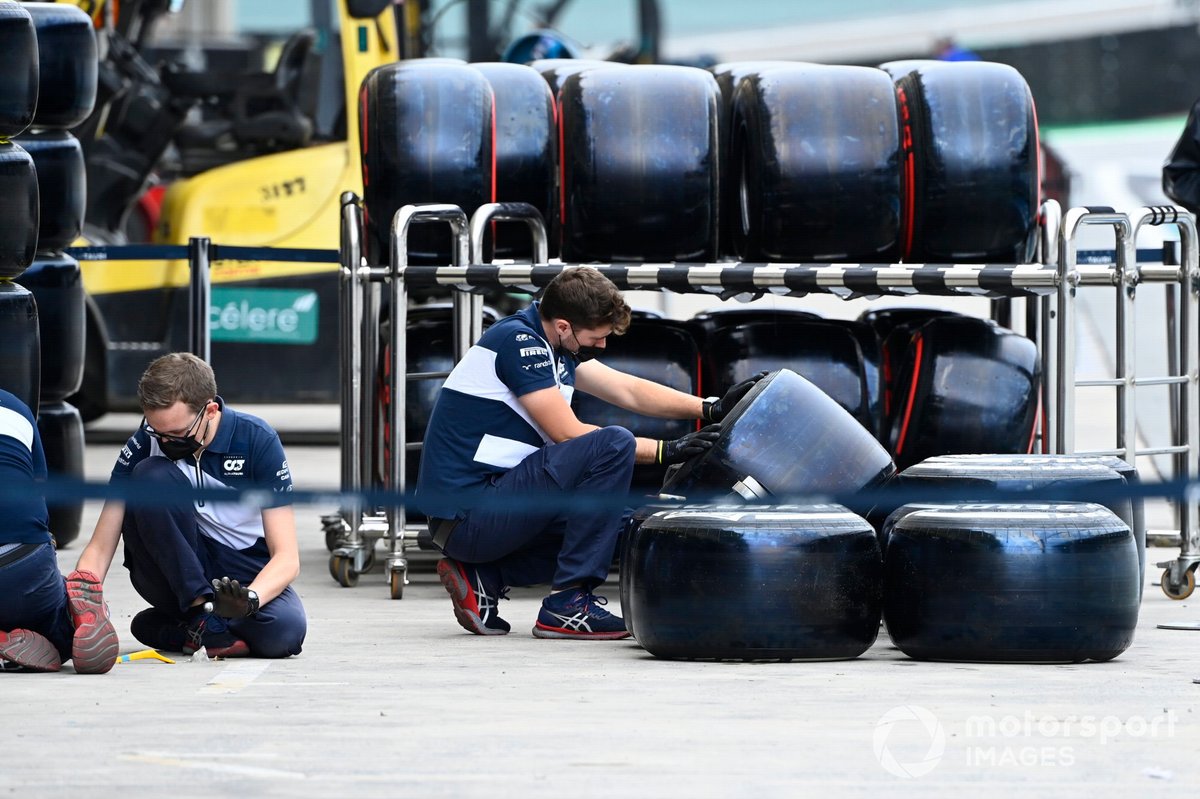 Tyres outside the, AlphaTauri AT02 garage

At each race, the supplier presents and hands over all the sets of tyres to the FIA Technical Delegate. To ensure independence and non-bias, the FIA allocates all the different sets to the different cars.

Each team gets 13 sets of dry tyres to use over the weekend – two sets of hards, three mediums and eight softs. They also get four sets of intermediate tyres and three sets of full wets.

If either of the Friday practice sessions, FP1 or FP2, are wet or the Saturday morning session, FP3, looks likely to be wet, teams get another set of inters to play with – but they must give back a used set before the start of qualifying.

How are tyres managed during the weekend?

Tyre usage is strictly monitored using a digital tagging system, which allows teams to pick up, hand back and swap tyres during the weekend. It’s complicated, so strap in and stay with me…

Of the 13 dry sets, teams must nominate one set that can only be used in the first 40 minutes of first practice and they must hand that set and one more set back within two hours of the end of FP1.

All teams must keep a fresh set of the softest compound ready for the final part of qualifying, Q3, in case they make it in. All cars in Q3 must then use that set during the top-10 shoot-out and hand back a used set of that type within three and a half hours after qualifying ends.

In the race, the drivers must use at least two different types of dry tyre, at least one of which must be one of the mandatory race specs mentioned earlier. If it rains, intermediate or wets are used and drivers don’t even need to change tyres at all if they don’t want to. This rarely happens though – Esteban Ocon became the first driver in 24 years not to stop for tyres this year in Turkey.

All the teams that don’t make it into Q3 can choose which tyres to start the race on, but those that go into the top-10 shoot-out all have to start on the exact set of tyres they used to make it into that session (unless it is raining on race day).

That’s why some teams try to gamble on getting through Q2 on medium tyres, rather than using up the faster softer compound, to give them more scope for strategy in the race. If a tyre is damaged in Q2, teams can ask for a replacement but the decision to give them one is down to the FIA Technical Delegate.

Why do teams use tyre blankets and how do they work? 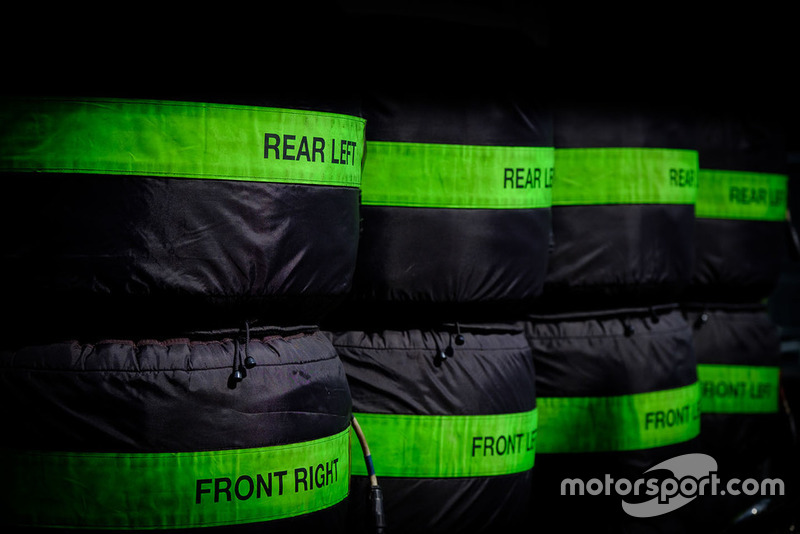 Stacks of tyres in heated blankets

Tyre blankets are wrapped around each tyre whenever they are stacked up in the pits waiting to be put on a car, or on the grid. They are used to warm the outer tyre compound up towards racing temperatures, as going out on cold slick tyres is no fun for any driver.

The typical temperature is around 110 degrees Celsius and the blanket is designed to keep an even spread across the circumference of the tyre. It wraps around the tyre and is fastened with a Velcro joint and two drawstrings pulls, with a circular cover fitted to the rims, again using Velcro.

The tyres are carefully logged and stored in sets and when they need to be moved they are stacked on a trolley and connected to power via colour-coded leads, with each tyre having its own temperature monitor. This trolley unit reportedly costs around £5,000, with each blanket costing around £1,500.

What running restrictions are there on F1 tyres?

Before the race, all teams are given a set of starting parameters for their tyres – the pressures they must run, the maximum temperatures the tyres can be heated up to in their tyre blankets and the camber angle they must set. These are all individually set and are calculated by Pirelli based on data supplied by the teams.

Once out on track, the pressures and temperatures vary with conditions - tyre pressures drop as temperature drops, or vice versa – and there are no rules to what these must be, mainly because there is no way of policing it.

The starting parameters are designed to ensure safe running loads when the race gets underway, but the lower the tyre pressure, the greater the potential grip as long as the compound sits within the right operating temperature window. If there are ways to exploit that, you can be the teams will try.

From next year, though, the new tyres will include a standard sensor, which is controlled by the FIA. This will enable them to fully monitor the running pressures at all times, and keep a closer eye on the tyres to potentially warn of imminent failures before they occur. 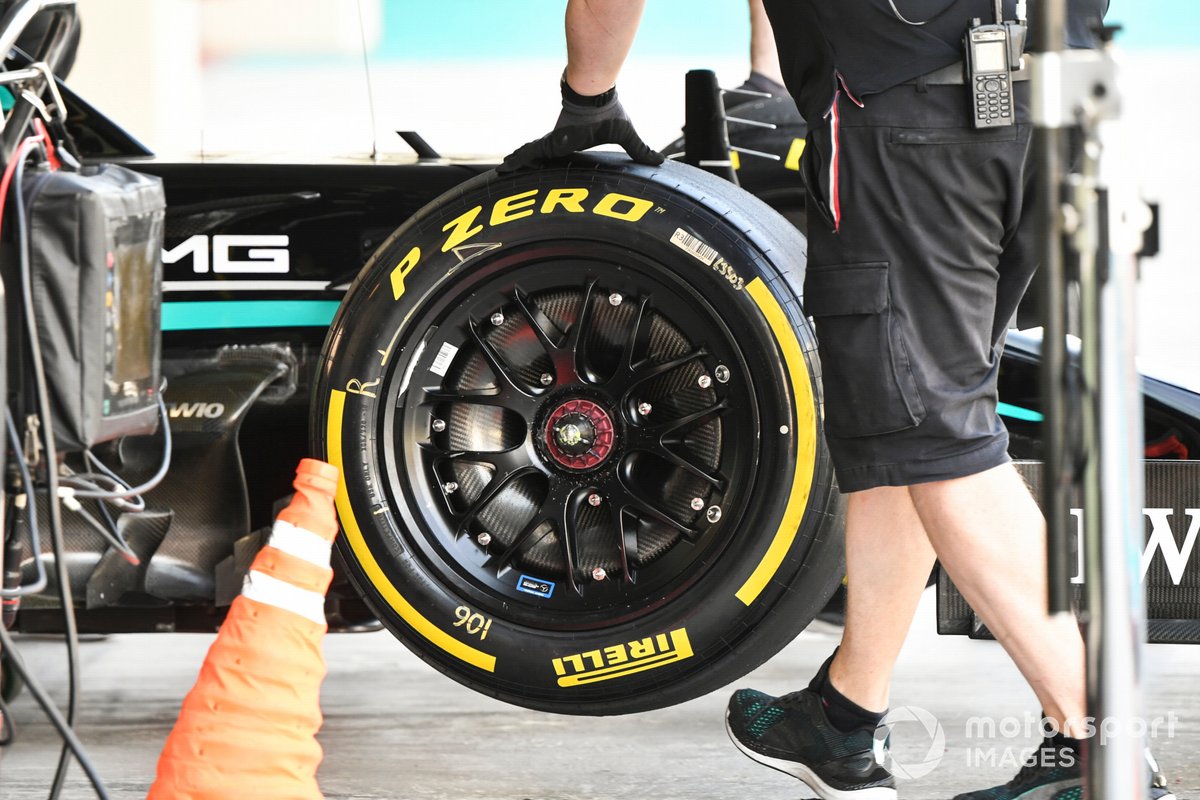