Masi keen to use warning flag as F1's "yellow card"

FIA Formula 1 race director Michael Masi says the return of a black and white flag warning for unsportsmanlike conduct by drivers should be considered as motor racing’s equivalent of football’s yellow card. 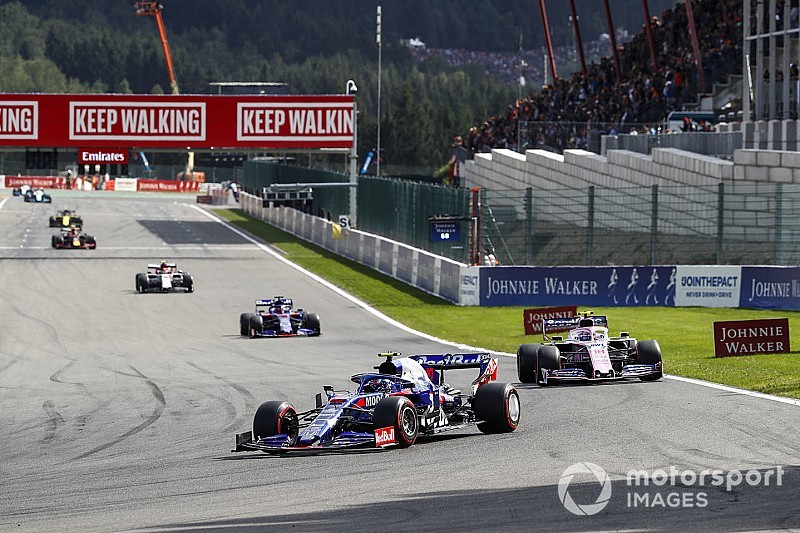 The black and white flag is available for use at all levels of motorsport, and the FIA International Sporting Code specifies that it “should be shown once only and is a warning to the driver concerned that he has been reported for unsportsmanlike behaviour.”

However, prior to last weekend’s Belgian GP the signal was last used in F1 at the 2010 Malaysian GP when Lewis Hamilton was warned for weaving in front of Vitaly Petrov.

Subsequently it fell out of favour, and former race director Charlie Whiting generally preferred to use radio messages to teams to convey warnings that an offence had been spotted by race control.

However, Masi sees the flag as a useful tool, and specifically as a transparent public warning that will be seen by all.

After some discussions with teams it was formally reintroduced at Spa. Drivers were told that it would be used if the timing loop in the run-off at Turn 4 was triggered by them running wide three times, while also being available for conduct such as moving under braking.

In fact, drivers respected the run-off at Turn 4 throughout the weekend, and it was never deployed for that reason.

However the flag – actually displayed on a light panel at the start/finish line – was used to warn Pierre Gasly for moving in the braking area during the race.

“The black and white flag, bad sportsmanship flag, is something that hasn’t been used prior to this since about 2010 apparently,” said Masi when asked by Motorsport.com. “But one of the discussions that has been ongoing with the sporting directors is using it.

“So one of the reasons I haven’t used it to date is trying to find out from as many of them and others as to why it stopped from being used, and no one could come up with a valid reason.

“It is one of the flags that exists in the code, and every single sporting director and every single driver is supportive of the use of it. It is effectively the motorsport version of the yellow card.”

Masi made it clear to the drivers at Spa that a repeated offence after a warning flag would go to the stewards, potentially triggering a penalty.

“Correct, and that was highlighted at the drivers’ meeting on Friday night, that it is your yellow card. If we use the example of this weekend, if a black and white had been issued for exceeding track limits at Turn 4, [due to] setting the loop off three times, and then you got another one for another incident, you wouldn’t get a second black and white, you would be referred to the stewards as a breach.”

The Turn 4 run-off at Spa was a special case, in terms of the high speeds at that point and the potential for an advantage to be gained down the following straight.

Masi says the flag will remain in use for track limits at some venues, as well for as other offences, such as that committed by Gasly.

“Not only was it in the [race director’s] notes to use for the track limits side of it at Turn 4 – and I think we need to put more electronic loops in because it seems to have a force field for them not to go near it – but it can be used for a range of matters, be it squeezing drivers, moving under brakes, all of those types of things that we see it as I said effectively, motorsport’s version of a yellow card, if you had to put it in football terms.”

“I don’t mind it too much, I think it’s a lot better to do that than give penalties,” said the Thai driver. “Let’s say even like the Vettel/Hamilton case in Canada it would have been resolved a lot better if it was just a warning first.

“I think it’s a good idea. We used it a lot in karting and it worked well, so I don’t see why it wouldn’t work in F1.”

Why F1 must explore every safety option after F2 tragedy