Mercedes has revealed that Lewis Hamilton's qualifying struggles at the United States Grand Prix were triggered by a dislodged switch cover on his steering wheel affecting his engine braking.

While Valtteri Bottas took pole position from Sebastian Vettel in Austin last weekend, Hamilton found himself down in fifth after being unhappy with the feel of his car during the quickest first run in Q3.

But the reasons for his difficulties only came to light when he returned to the garage after that lap, as mechanics found the cover over a rotary dial (below, red arrow) had been knocked loose.

Mercedes strategy chief James Vowles told the team's regular post race video debrief: "During the course of the lap, underneath his right hand, there's a little rotary and that rotary adjusts the engine braking.

"Normally it has a guard on it, and what happened is the guard had accidentally been knocked off. As he went through the lap, every time he turned the steering wheel, he accidentally changed the engine braking and that caused him to lose performance towards the end of the lap.

"The mechanics spotted it immediately the second the car had come back in but obviously that first run was compromised as the result." 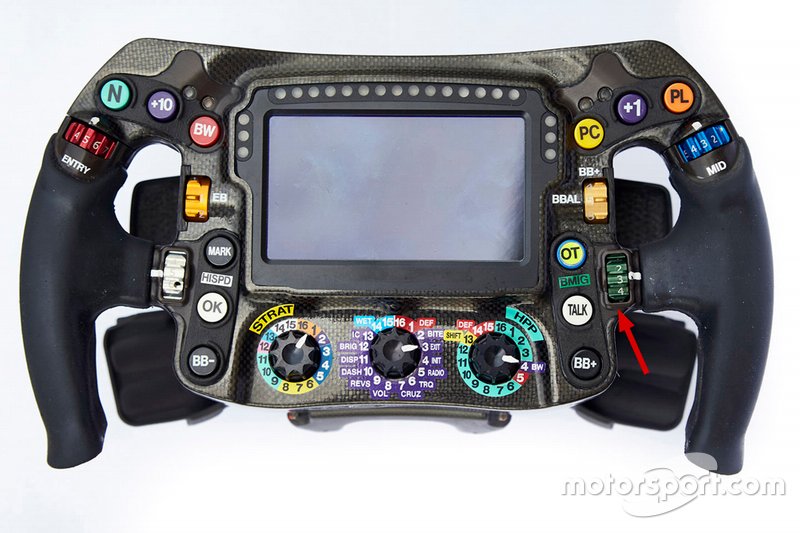 While the problem was sorted for Hamilton's second run, the track conditions were not as good which meant he was unable to improve.

Vowles added: "Come the second run you would've seen everyone went slower, the track in fact had slowed down slightly, small wind change, small track temperature change and Lewis wasn't now able to compete at the front, ultimately sealing his place as fifth on the grid."

Hamilton recovered quickly from his qualifying woes to fight for the win with Bottas in the race. And although he lost out in that battle, his second place was enough for him to seal his sixth drivers' championship.

Ferrari: No explanation for Austin slump yet