The two-seater Formula One cars of the European Minardi F1x2 fleet had their final outing of the 2003 season yesterday at the UK's Donington Park circuit. The event was scheduled to allow the team to fulfil commitments to a number of its valued ...

The two-seater Formula One cars of the European Minardi F1x2 fleet had their final outing of the 2003 season yesterday at the UK's Donington Park circuit. The event was scheduled to allow the team to fulfil commitments to a number of its valued technical and commercial partners, including Trust International, Bridgestone, and Wilux. 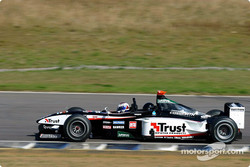 The V10 engines of the European Minardi two-seaters may have fallen silent for this year, but they will be firing up again early in 2004, as there is another exciting season in prospect for these unique vehicles, which continue to be wonderful "ambassadors" for both the sport of Formula One and the European Minardi F1 Team.

"This was a very successful day for Trust, Wilux, Muermans, and the other sponsors who have been here at Donington. I took 25 passengers around the track and I think they all enjoyed themselves. I want to say a special thank you to all of Minardi's Dutch sponsors this year, and to Paul Stoddart, who with programmes like this one, gives something tangible back to the sponsors that other Formula One teams cannot offer. We have worked together well this season and it has been an enjoyable day."

"It has been another good day with the Minardi F1x2 cars, and personally, I had a great time. Donington is one of my favourite circuits, and I just loved being able to drive it in a Formula One car. It was also a special thrill to take my Dad as a passenger today, and I'm particularly pleased he now has a better understanding of just how challenging it is to drive one of these cars on a track like this. I think it may have given him a new perspective."

"I think it has been a good day for the guests and I am very pleased to have been able to share the thrill of being in a Formula One car with a number of them. I'm also happy to be part of the Minardi family and able to participate in days like this. I am looking forward to next year."

"Today set a new record for the number of passenger rides achieved by the European Minardi F1x2 cars in a single day -- 66 in total! I think it's fair to say that all our sponsors, especially Trust, Muermans, Wilux and Bridgestone, enjoyed a tremendous day, and their lucky guests, an experience of a lifetime. Thanks to all the drivers -- Jos, Nicolas, Gimmi and Tonio -- for a job well done, and to the English and Italian teams for all their hard work, both today and throughout the year. Everyone has put in a fantastic effort."

The Minardi star with a six-wheeled love affair