Formula 1's technical attention has been dominated by Mercedes' DAS steering system this year, but it has now emerged that it could just be an offshoot of another clever solution already in use by the world champion team.

The story of DAS is intriguing, as the system was only discovered during pre-season testing because F1 had decided to film the sessions live from Barcelona.

Onboard footage captured Lewis Hamilton and Valtteri Bottas pushing and pulling on the steering wheel, and it immediately sent shockwaves through the F1 world.

Since then Dual Axis Steering has become a major topic of discussion in the paddock, as rivals have raised serious doubts over the legality of the system. Red Bull even intended to raise a protest over it had the season actually got underway in Australia.

As everyone tried to understand DAS, there were some who believed the system to be a sleight of hand by Mercedes. For rather than it be its main technical innovation, the suspicion was that Mercedes was covering up a solution that could be even more useful for the team.

Now, the indications are that DAS is not something completely new: but is instead just an extension of something Mercedes was already doing.

The system in question relates to the use of Ackerman angle - the difference in steering angle between the inner and outer wheels. Being able to alter that would allow either wheel to follow a different path to optimise slip angle.

It appears that Mercedes has a variable system that allows it to better adjust the Ackermann angle based on the radius of the given corner.

This is achieved through an ingenious combination of suspension geometry and the steering angles employed, all of which will be of great benefit to the car's handling, whilst improving the life and performance of the tyres too. 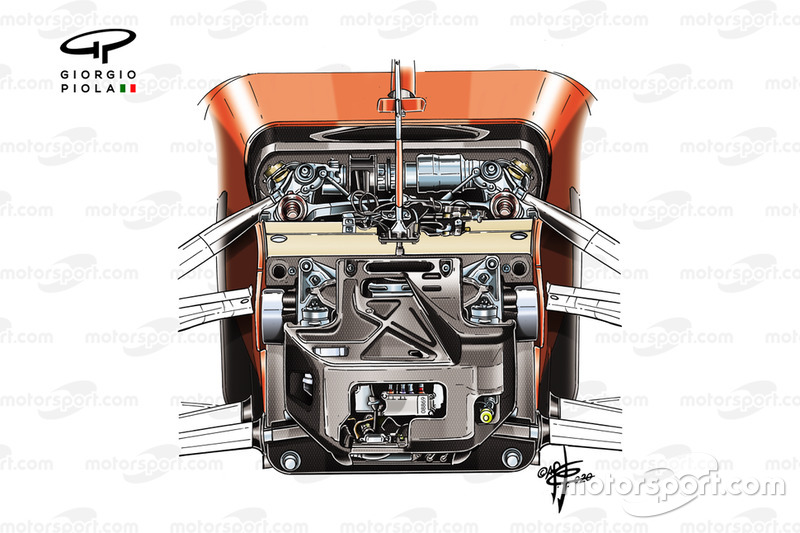 We understand that while Mercedes may have pioneered this dynamic Ackerman arrangement, they are not the only ones to be using it either. Ferrari is believed to have its own version too, having installed it alongside what appears to be a more complicated steering assembly on its car last season and re-optimised it when designing the SF1000.

This puts the Scuderia at an advantage if it does decide to pursue DAS, a concept that it has been in talks with the FIA over for a number of years too.

Its adoption of such a system will likely come down to two factors: the result of any protest launched by Red Bull when the season does finally get underway and whether it will be able to offset the development cost, additional weight of the system and repackaging of its front-end against the lap times gains that are on offer.

It is understood that the system was already employed on the W10. DAS is simply another piece in the jigsaw puzzle, allowing it to run at even more aggressive angles and then manually reset for the straights.

This has incremental benefits in cornering performance and also offers a straight line speed boost, as not only does it result in less tyre scrub but it also realigns the tyre to alter the turbulence it creates.

DAS is a shining example of how a team can continue to demonstrate ingenuity even during a period of relatively stable regulations.