Carlos Sainz thinks it vital that McLaren doesn't switch off development of its 2019 car to get a headstart on next year, as its experiments continued with a new suspension development in Belgium.

Lando Norris trialled the latest idea (see sidebar below) during Friday free practice at Spa-Francorchamps, as the team conducted back-to-back tests as it looked for new ideas to improve the handling of its MCL34.

Although the team holds a comfortable 39-point advantage over Toro Rosso in the fight for fourth place in the constructors' championship, Sainz is clear that it must not think that it can now abandon improving the current challenger to throw all its efforts on 2020.

"I think as tight as the midfield is, if you lose focus on this year you very quickly get yourself into a bit of pressure towards the end of the year," said Sainz, when asked by Motorsport.com about how the team should balance its car plans.

"And with the extra pressure, you never know what can happen in F1. So it is better to focus on this year, especially because next year the car is an evolution of this year. Anything that you can learn from this year in trying to evolve this year's car, so you will improve next year's car at the same time.

Although McLaren was pleased to get itself into the best-of-the-rest slot in the points table over the first half of 2019, Sainz says that it needs to use the remainder of the year to prove its pace.

"We outperformed [others] at a very high level on Sundays, which is giving us that edge over the midfield," he said.

"We all assume we are not the fastest midfield car, as we saw at many circuits this year. We are just consistently there or thereabouts. But it comes to race day and there is good execution and it helps us get a lot of points.

"We agree we haven't been fourth fastest as many times as we would like to be, so probably that will be more the main target for the second half of the season: to make sure we keep trying things in order to try to help next year's development car that is running in the wind tunnel. Let's keep learning from this year to apply it for next year." 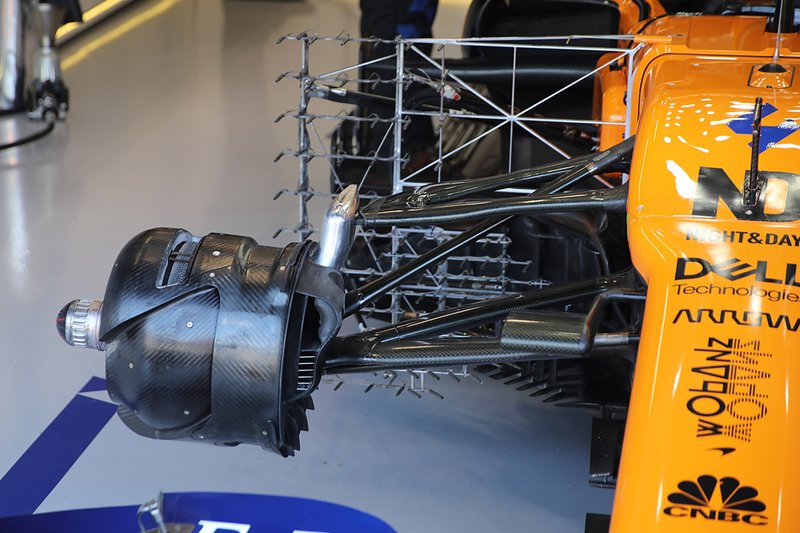 McLaren's new suspension set-up features a reworked upright mounting, featuring a larger extension for the top wishbone to connect to.

Previously, the horn-shaped extension had the wishbone sit on top of it, but this has now been made larger and allows the wishbone to connect to the side.

In doing so, this shortens the overall wishbone length and redefines the manner in which the suspension travels on turn-in.

It appears that McLaren wishes to further reduce the amount of roll in the corners, providing the car with a more stable aerodynamic platform along with a more consistent level of tyre contact.

Lando Norris trialled the design in free practice, while Sainz continued with the specification of suspension first debuted in France.

Then, the team added an en vogue suspension pushrod bracket to assist with maintaining a consistent ride height in the corners.

McLaren also tested the new suspension layout in first practice with an array of Kiel probes to assess the aerodynamic effect of the mounting point.