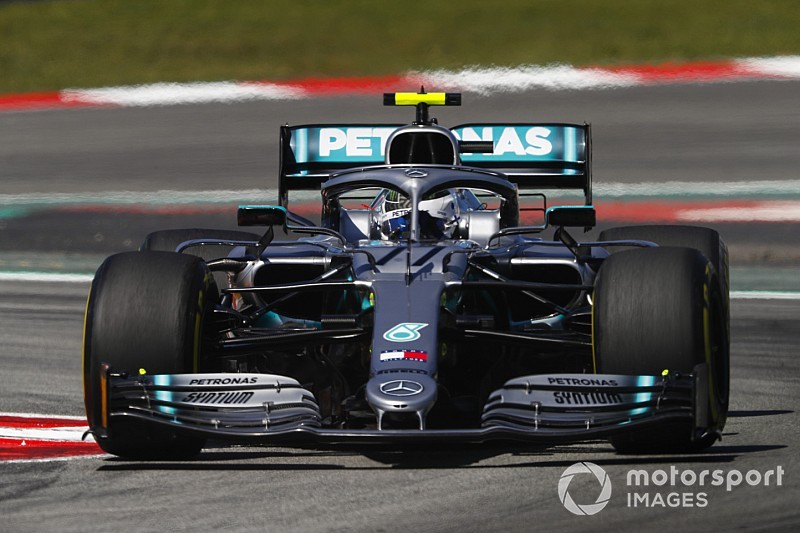 Bottas, who also set the pace in the morning session, was fastest in the early stages when using medium-compound Pirellis, seven tenths faster than Ferrari driver Sebastian Vettel.

Vettel and teammate Charles Leclerc then traded top spot as the first frontrunners to use the soft Pirellis, with the latter eventually winning the intra-team battle with a lap 0.088s quicker than Vettel.

But at the halfway mark of the session, Bottas and Hamilton were out and lapping quickly on the softs.

Hamilton initially took first place with a lap of 1m17.410s, only for Bottas to eclipse it with a 1m17.284 on his first flier on softs.

Although Hamilton subsequently improved, it wasn't by enough and he ended up just behind his teammate and a quarter-of-a-second faster than the lead Ferrari of Leclerc.

Red Bull driver Max Verstappen, who suffered an oil leak in the first session that led to an engine change – fitting the spec 2 engine that was slated to be put in overnight anyway – was fifth fastest and 0.750s down.

He subsequently complained of a loss of power that led to him returning to the pits after completing only 15 laps, although he did return to the track for the final 15 minutes of the session.

Kevin Magnussen was running in the old-spec Haas to allow the team to compare its revised package to the known one, and ended up eighth – two tenths slower than Grosjean.

Alfa Romeo driver Kimi Raikkonen was one of the last drivers to improve during the session, allowing him to jump from 15th to 11th, putting him just ahead of the second Toro Rosso of Alex Albon.

Lance Stroll, who crashed his Racing Point machine at the ultra-fast Campsa right-hander in the morning and drove a car without the latest aero upgrades as a result, was 13th fastest ahead of the Renaults of Nico Hulkenberg and Daniel Ricciardo.

Lando Norris was 16th, albeit only three tenths off the top 10, and ahead of the second Alfa Romeo of Antonio Giovinazzi.

Sergio Perez was 18th in the Racing Point, ahead of Williams pair George Russell and Robert Kubica – the latter duo separated by six tenths.