One of the big tech talking points of 2020 has been the similarities between Racing Point's RP20 and last year’s Mercedes W10, with its clone having earned some nicknames like ‘Tracing Point’ or ‘Pink Mercedes.’

While there are striking resemblances between the two cars that appear at first glance to make them virtually identical, if you peel back the layers the story is a little different underneath.

Indeed, Racing Point continues to design, develop and manufacture many aspects of the car that it is perhaps not being given credit for. This is especially true because it has worked on some design aspects that it could simply have bought off the shelf from Mercedes, just as Haas has done with Ferrari.

This is one of the reasons why Renault has focused it recent protests on the brake ducts, rather than the entire car.

Looking at the RP20’s inboard suspension, for example, you can start to see where the Mercedes mimicry ends and the Racing Point DNA is injected. 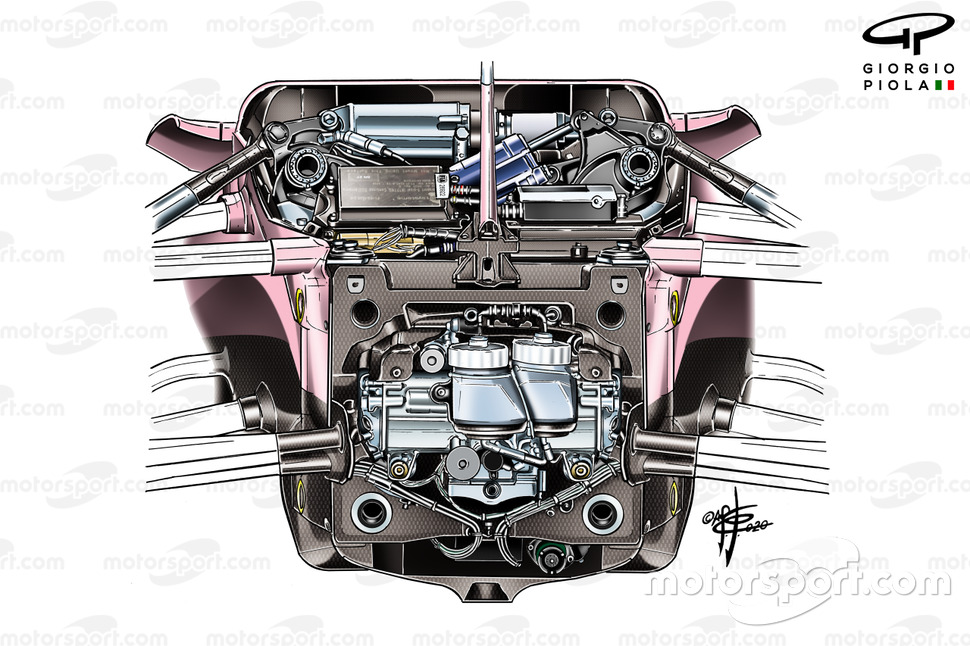 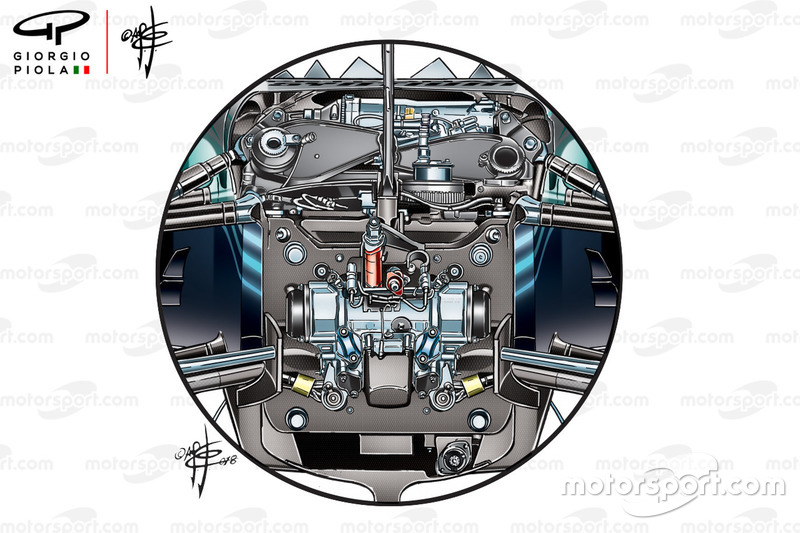 As we can see here in the illustration of the RP20’s front suspension (left), there are distinct differences in the hardware being used.

The most notable of which is the design of the heave damper, which in the Mercedes case has resulted in it gradually phasing out its fully hydraulic layout for a more conventionally sprung option like Racing Point had already been using.

Mercedes was seen testing a heave damper, comprising Belleville springs, in the latter phases of last season, with the design fully implemented on the W11 (below).

The rest of the RP20’s suspension architecture looks similar to the Mercedes design, but it clearly carries the DNA of previous Racing Point challengers. The team most likely decided that this was one aspect of its old design philosophy that it could carry across.

Whilst it’s obvious that the master cylinders are front and centre on the Racing Point, it’s also clear to see that it has gone its own way with the steering assembly too.

Remember the W10 was fitted with a passive precursor of its DAS system and Racing Point obviously felt that taking this hardware from Mercedes, without also taking its inboard suspension, would compromise its understanding and operation of the car.

The team’s decision to retain its own suspension design has therefore given it a known quantity with which to set up the car and continue to be both kind on and extract performance from the tyres. 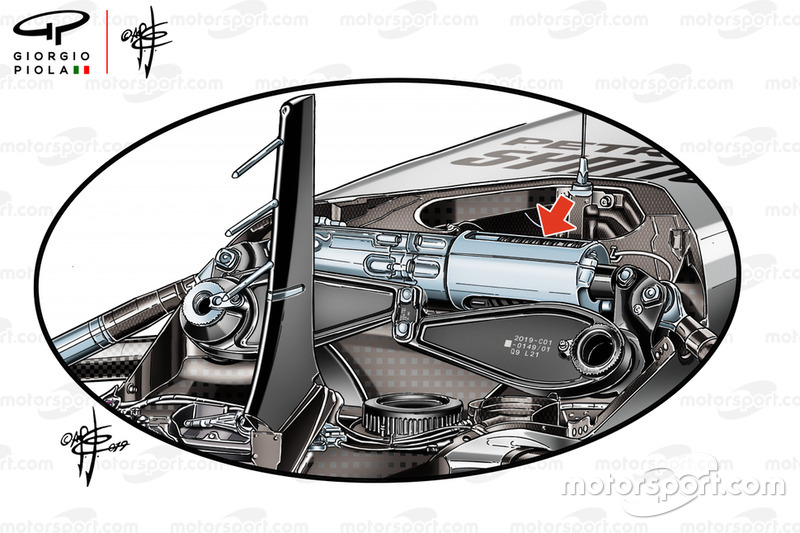 The team has faced a development tug of war since it switched gearbox supply from McLaren to Mercedes, as Racing Point had already ventured down a path that many of the other teams had too - trying to adopt a Red Bull style high-rake aerodynamic philosophy.

Unlike Mercedes, it has still been able to make a higher rake work, even if it’s been compromised by the longer wheelbase that it had to accept as part and parcel of using the Mercedes power unit and gearbox.

However, this conflict between the two philosophies really required the team to switch to a more Mercedes influenced aero concept if it was going to unlock its potential.

An overall concept switch is an expensive enterprise for a midfield team. A huge amount of carry over is normally made year-on-year, with redesigning, retooling and manufacturing of large components, such as the monocoque, carrying a significant financial burden.

Interestingly, having conducted tests at various rake angles last season, the RP20 is more of a halfway house solution when it comes to rake this year.

It is not as low as we’ve seen Mercedes operate, and not nearly as extreme as it used to have its car set up in the past.

This goes to show that the use of its own suspension design does have an effect on the car’s overall aero map too, as it has to run slightly higher to get the similar levels of performance to last year’s Mercedes.

The suspension isn’t the only area where we can see differences, as it’s clear to see that it has a different arrangement when it comes to keeping things cool under the body too.

The team has retained an asymmetric radiator and air-to air intercooler setup, rather than the liquid-to-air setup preferred by Mercedes. 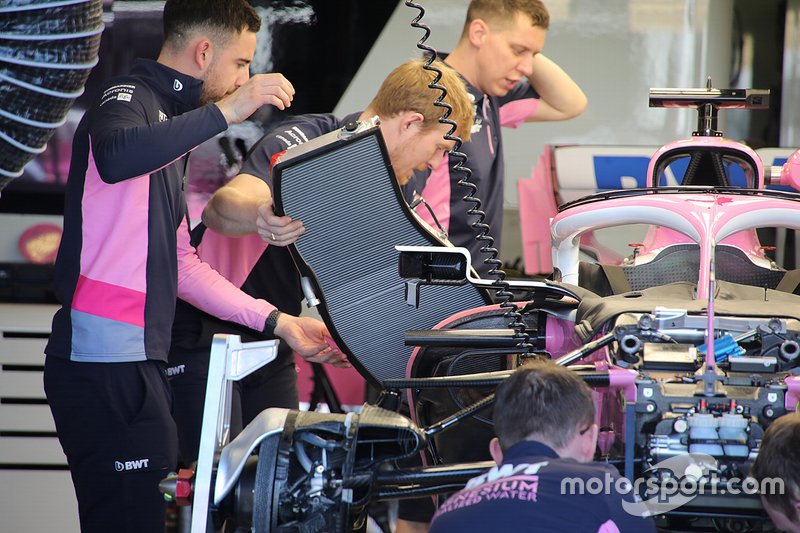 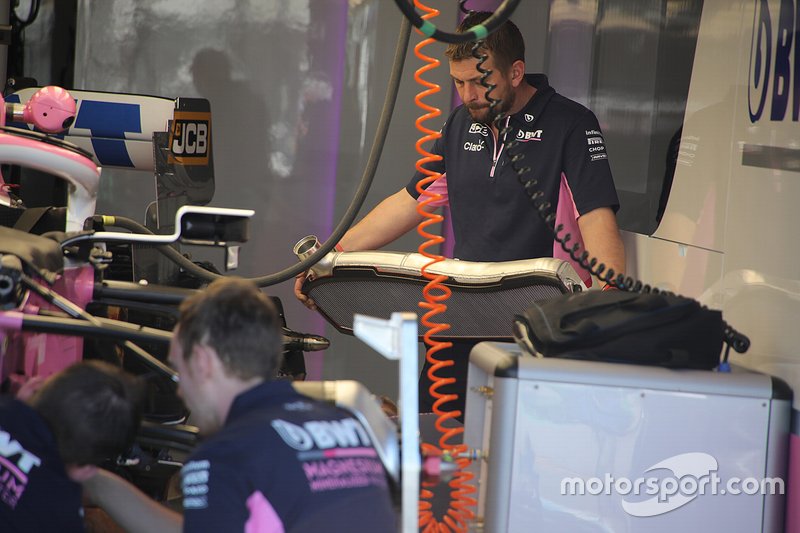 We can see that arrangement here, as the mechanics install the radiator used to cool the ICE on the right-hand side of the car, and the air-to-air intercooler used to cool the boost created by the turbo being installed in the left-hand sidepod of the RP20.

This difference not only has an impact on cooling and the operating thresholds of the power unit, but also creates an offset in the aerodynamic performance of the car when compared with the W10.