Tyre argument gets heated at Monza

The FIA may have declared the tyre situation closed but it certainly got a heated rehashing in Friday's press conference at Monza. Ferrari technical director Ross Brawn, who recently bandied about the word 'illegal' in relation to Michelin tyres, ...

The FIA may have declared the tyre situation closed but it certainly got a heated rehashing in Friday's press conference at Monza. Ferrari technical director Ross Brawn, who recently bandied about the word 'illegal' in relation to Michelin tyres, and even went so far as to say Ferrari could contest earlier race results, had to face three members from Michelin's partner teams. Never shy in voicing their opinions, McLaren boss Ron Dennis and Williams technical director Patrick Head had plenty to say, although Renault boss Flavio Briatore was unusually restrained. 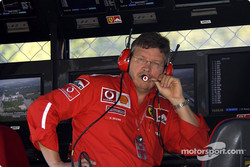 Ross Brawn.
Photo by Ferrari Media Center.
Obviously, the tyre issue was a major discussion, or perhaps argument, point. The initial question of feelings on the situation was taken up first by Briatore. "I think our team, like everybody else on Michelin, we feel it was not illegal at all, because if somebody was illegal they would be disqualified and nobody, for the moment, was disqualified in any race," he replied, adding it was an unclear issue (the tyre rule interpretation) and "it's very difficult to change the rule three races before we finish the championship."

Head concurred, adding: "…any such use of words such as illegal or cheating or something is completely inappropriate". Dennis commented "…there's inevitably a desire to retaliate to the insinuations and accusations but I'm going to say nothing." Of course, he then went on to say quite a lot, the least of which was: "I hope that where we have arrived is really genuinely the end of it, because I think we've got a great world championship that is most definitely going to stay so until the end of the season if there is no more controversy brought to bear."

Brawn's opinion was that different people interpret the rules different ways: "Obviously our interpretation was not that the tread was constrained by only being measured when new. With the construction of the regulation I can understand how someone may wish to interpret that way but the construction of the regulation was not when... it would have said, furthermore, when new, the tread would be no more than 270. It doesn't say that. So we had an interpretation which was obviously different to the Michelin teams."

This prompted an exchange of views from Brawn and Head, in which Brawn started waffling on about paranoia and integrity, to which he concluded; "As I say, I don't think it will make a huge difference and I think we've got a great championship ahead of us. And may the best man win."

Questioned about his claims that Michelin tyres were illegal, Brawn shied away from it: "I think our opinions about the situation have been expressed. I've given you an explanation here of what happened and we want to try and run the rest of the championship in the best manner and best spirit that we can and I don't want to go back over those comments."

Dennis was next to take up the argument, expressing himself in his usual lengthy manner which left Brawn interjecting 'I didn't say that...' whenever Dennis paused for breath. Finally, despite his strident blustering and accusations earlier in the week, Brawn decided Michelin weren't intentionally abusing the rules.

"I don't believe for a minute that Michelin were trying to bypass the regulations," he said, apparently stunned into submission by Dennis' wordy tirade. "They obviously had an interpretation of what they felt was acceptable for the tyre and they are not a company that are going to do something that they knowingly know to be in breach of the regulations and that is down to interpretation. So I do accept that Michelin would not have done that knowingly…"

The final word was had by Briatore, who raised a question many would agree with: "If it was so important, this interpretation (of the tyre rule), after two years, why did the FIA never measure the tyre after the race? Everybody knows that when we finish the race the FIA measures everything, weight, height, whatever. Everyone knows the tyre is fundamental in the race, so why, in two years, have the FIA only started measuring the tyre when Ferrari talked to them?"

Promoted: Ross Brawn on moving the sport forwards for fans