Ferrari Formula 1 driver Sebastian Vettel escaped a penalty for going off track in Q3 at Monza because of an anomaly in the wording of the relevant regulations. 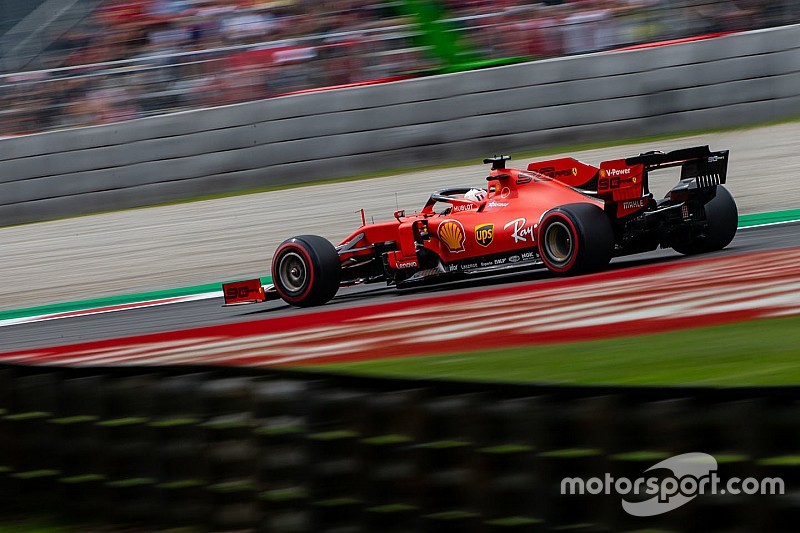 Vettel ran wide at Parabolica on the Q3 lap that ultimately earned him fourth place on the grid.

Some TV angles appeared to show his tyres outside the white line – and hence the boundaries of the track – but after considering the matter the stewards opted not to penalise him, a decision that caused a stir on social media given that other drivers had laptimes deleted for apparently similar transgressions in FP3.

The relevant part of the FIA F1 Sporting Regulations says: “Drivers will be judged to have left the track if no part of the car remains in contact with it and, for the avoidance of doubt, any white lines defining the track edges are considered to be part of the track but the kerbs are not.”

This is supported by a paragraph in the FIA’s International Sporting Code, which reads: “A driver will be judged to have left the track if no part of the car remains in contact with the track."

In both cases there is a clear reference to “contact.” However the issue was complicated by Version 3 of the Race Director's Note issued by the FIA’s Michael Masi, and which was updated to alert the teams to the possibility of penalties for running wide at Parabolica.

However, in it there was a reference not to contact, but to the wheels being over the white line.

Masi wrote: “A laptime achieved during any practice session or the race by leaving the track (all four wheels over the white track edge line) on the outside of Turn 11 [Parabolica] will result in that laptime and the immediately following laptime being invalidated by the stewards.”

In reviewing the video evidence the stewards noted that the side view showed that Vettel’s car was indeed not in contact with the track, as the contact patch of his tyres was outside the line.

However, on-board and overhead views indicated the “wheels”, which protrude beyond the tyre contact patch, were still atop the white line, as mentioned in the race director’s notes.

Given this apparent anomaly, and the fact that the offence was related directly to the notes, the stewards felt obliged to give Vettel the benefit of the doubt.

"This cast an element of doubt which is considered significant enough to give the “benefit of doubt” to the driver in question.”

Monza result made F1 feel like "a different sport" for Renault