Daniel Ricciardo admitted he could not believe what he was seeing when he watched Alex Peroni’s mammoth FIA Formula 3 crash at Monza on Saturday, as fellow grand prix drivers agreed that lessons needed to be learned.

Peroni's Campos Racing car was launched into a series of terrifying barrel rolls during Saturday’s F3 race after striking a sausage kerb that had been placed in the run off area at Parabolica.

The Australian driver impacted the barriers upside down before flipping the right way up as his stricken car came to rest right-side up (pictured top).

Having watched the events unfold live on television, Renault driver Ricciardo said that such an accident had previously been unthinkable.

“It’s weird and you would never think that that kerb there would have such an impact,” said Ricciardo. “Unfortunately, sometimes you need something to happen so that you realise the consequences.

“I’d never looked at that kerb thinking of it as a danger or a threat. I don’t know whether the kerb had lifted off the ground but yeah I couldn’t actually believe what I was seeing. I was actually happy to see it, because I know if they show a replay it means the driver is okay.

“So I’m glad he’s okay but it’s crazy. It’s another lesson for us, so even if it seems like nothing - at those speeds you can just get a little turbulence under the car and it can take off.”

Red Bull’s Alex Albon reckoned the nature of the crash should serve as a prompt for F1 to think more about how it deals with track limits – and whether or not kerbs were the best solution.

“Even with Formula 1 I don’t think we’d have had that kind of reaction because how our cars are set up over bumps and stuff like that,” said the Anglo-Thai driver. “But yeah, that’s obviously a bit of a wake-up call.

“Luckily I don’t think we have kerbs like that anywhere [else] we go to, and I’m sure we can redesign that. I’m surprised it’s not one long one. It’s basically a roadblock on the exit.”

With F1 organisers having removed the kerb that Peroni struck before final practice, world champion Lewis Hamilton suggested that the best solution in that place would be grass and gravel.

“It was much better when it was grass and gravel on the exit there because I remember you used to come into that corner, you kind of… you were a bit nervous going in too deep because you might end up in the wall,” explained the Mercedes driver.

“We didn’t need to be consulted about the kerb. It’s a band-aid on the issue of putting tarmac there in the first place. I don’t think they needed tarmac round there.”

But while the Peroni accident prompted some discussion about the use of asphalt run offs, Nico Hulkenberg was not convinced that such a big reaction was needed.

“I don't think it's time for a big debate,” said the Renault driver. “I think some things you have to think about and look at, but it's also for the driver and everyone to apply common sense and be reasonable, keep things controlled and it's fine.

McLaren's Carlos Sainz added: “I didn’t expect that a car could actually do that on that kerb, but it is something that we’re going to take into account in the future.

"That kerb was meant to be there just for track limits not for an unsafe situation, and I think no one expected that. It’s a lesson learned again for the F1 family that that kerb could create that kind of flip.” 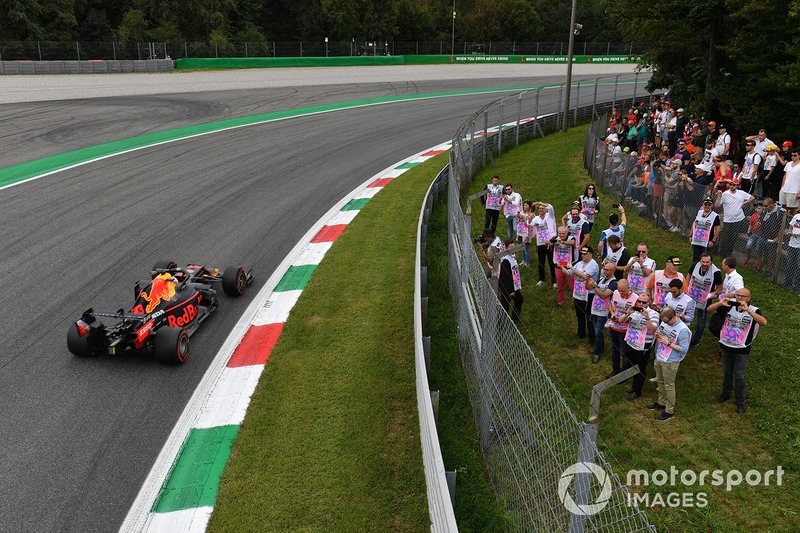