26th July 2013. Grove, UK. Williams is pleased to announce that Paul Newsome has been promoted to the position of Chief Technical Officer for Williams Advanced Engineering; the division of Williams that adapts F1 based technologies for a range of commercial applications.

In this new role Paul will have overall technical, operational and delivery responsibility for all projects within Williams Advanced Engineering. This includes the design and manufacture of high performance road and race vehicles in addition to the company’s introduction of flywheel and battery based energy storage systems into the motorsport, mass transit and niche automotive sectors. 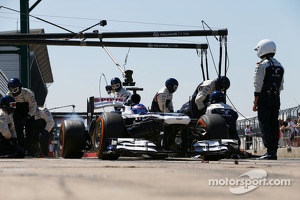 Paul joined the company in January 2011 as Head of High Performance Vehicles, where he was responsible for the team that designed and built in conjunction with Jaguar Land Rover the C-X75 hybrid supercar. Paul has previously worked at the BMW Group as Platform Director, Jaguar Land Rover where he was Group Chief Engineer for advanced product creation and research, and Lotus where he was Director of Engineering.

Speaking about his new role, Paul commented; “I’m honoured to be taking on this exciting new role to help lead Williams Advanced Engineering in the next stage of its development. The company continues to expand rapidly and work together with high profile clients to bring cutting edge Formula One based technology and know-how to their products and services.”

Mike O’Driscoll, Group Chief Executive Officer of Williams, added: “Paul has been a real asset to the company since he joined us in 2011 and the successful delivery of projects under his stewardship has helped Williams Advanced Engineering develop an increasingly strong brand in the high performance engineering sector. Our diversification strategy has been ambitious in its scope and is starting to bring in strong revenues to the Williams Group, and we will be working closely together to ensure that this momentum continues.”

Wolff has "no doubts" about Massa, despite point-less start