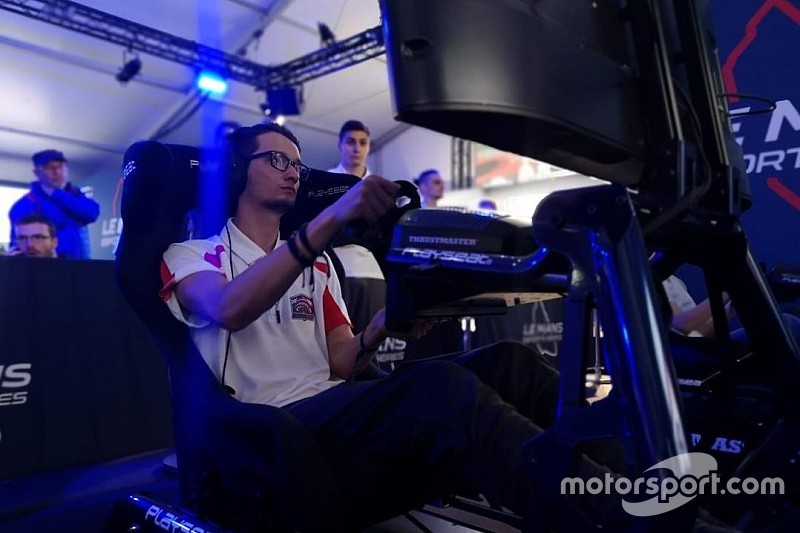 Twelve three-driver teams are battling it out in nine-races over a 24-hour period, with a $100,000 prize pool and a place on the real-life podium.

The first eight races set the grid and time intervals for the 90-minute finale, which will decide the series champions.

Baguette, which is made up of Red Bull Esports driver Aurelien Mallet, Christopher Cabrera and Alexandre Arnou, didn’t win any of the races but finished no lower than fourth in each race.

It's leading the points table, four points ahead of Kitty Krew – they emerged victorious in a tense third race at Silverstone with modern prototypes.

The team with the most prize money accumulated so far is the Mad Motorsport entry, it sits third in the points standings, but won the opening two races and brought its total prize money up to $9,000 by dominating the fifth race.

Mad opted to prioritise its budget on cars that would be advantageous in the early races, sacrificing its chances of major success in the finale.

“Our team has gone for the strategy, where we’re aiming for the wins the smaller races,” Mad Motorsport driver Cian Butler told Motorsport.com.

“We’re going for top six in the final race, anything more is a bonus.”

Williams Esports sit level on points with Mad in fourth place, it picked up second place and $2,000 in the second race. Wildcard entry Veloce rounds
out the top five.

Both Williams and Veloce have suffered mixed fortunes so far. The fifth race was the perfect microcosm of this. Veloce was punted off down the order, recovered but was then handed a stop-go penalty for causing a collision.

Veloce then nicked fifth place from Kitty Krew on the final lap of the race, while further up the road, Williams lost the final place on the podium to Keep it Simple Racing.

Keep it Simple’s Tobin Leigh had taken a dominant victory in the previous race, lapping the entire field, while the Chinese trio who topped the Asian qualifying competition, picked up second despite a bizarre pitlane crash.

The remaining four races of the Super Final are been streamed right now across Motorsport.tv, YouTube and Twitch. The final race will also be on Facebook, with the broadcast beginning at 9.15am CET on Saturday morning.