When thinking about the 2013 Daytona 24 Hours in the future, what will stick in your memory? Looking at the finish straight, because that’s what was right in front of my eyes when I coasted with an empty fuel tank on the last lap. That was definitely bitter after such a hard battle for success for 24 hours. 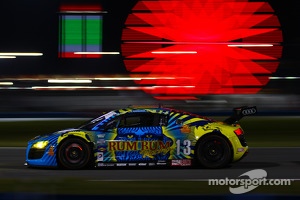 On the whole, it was an emotional roller-coaster for you… That’s right. After the time penalty at night, which cost us two laps, we battled to make up ground again and took the lead. Then, in the last hour, I had to make sparing use of my fuel. We knew that it would be incredibly tight. The others came up from behind, so I had to step on the gas pedal again and still save fuel. That really wasn’t easy but we almost made it - running out of fuel only 200 meters before the finish line was obviously painful. But it was still a great race and a cool experience for me. It was fun for me and the guys from the team anyway. I hope that next year we’ll be able to strike back and complete the 200 meters that were lacking today.

What was going on in your mind at that moment? Well, I knew that it would be a tight situation. My display was already showing "fuel alarm" on the last two laps, so I was expecting it in a way. But when the first misses actually started on the last lap I couldn’t help but think: "This can’t be true now!"

After qualifying, would you have expected such a big success for Audi? Honestly speaking: no. But it was like it had often been the case in the past: We thought that it would be hard. But across the distance the Audi R8 was very, very good again. The R8 has meanwhile become an almost unbeatable endurance car that has won all the major endurance races that exist. But it was also a superb performance by all the teams, mechanics, drivers and everyone who was involved in this project. The entire team performance was right on the mark.

In which areas did the R8 GRAND-AM have its strengths at Daytona? Things went really well across the distance and there was relatively little tire degradation. The car was consistently fast everywhere. The speed deficit we had in qualifying wasn’t quite as large in the race. Still, we lost a tiny bit on the straight. That made overtaking difficult for us. With a little bit more power I wouldn’t have had to stay behind a Ferrari here and there quite as long in traffic. But the car felt fantastic nonetheless: at night in cooler conditions just like in the heat - it was really good fun.

Will it be possible now to battle for victories with the R8 in the GRAND-AM at other races too? I think that at Daytona we proved that the R8 GRAND-AM is capable of winning. I’m sure this will not have been the last GRAND-AM victory this year.