Roger Miller and Ian James looking forward to their first race at the new Austin track.

Salt Lake City - Miller Racing, based in Salt Lake City, is heading to Austin, Texas, this weekend for Round 2 of the 2013 Grand-Am Continental Sports Car Challenge Series. 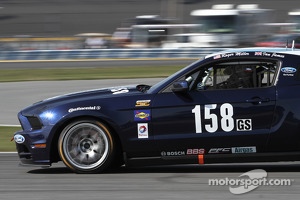 This event will take place on the new, state-of-the-art Circuit of the Americas, which is the new home of the United States Grand Prix for the Formula 1 World Championship. The 20-turn, 3.41-mile facility hosted Formula 1 in its first major event in November, and received universal praise from racers and spectators alike for its challenging track and first-class amenities.

Racing at a new facility is always challenging for race teams, but Miller Racing got a chance to test at the Circuit of the Americas in early February, giving team principal Roger Miller and co- driver Ian James some very valuable seat time to learn the track. The test was equally valuable for the Dempsey Racing crew, who were able to dial in the No. 158 Miller Racing Ford Mustang Boss 302R, sponsored by Total Care Auto, Miller Motorsports Park and the Ford Racing School, to the particular demands of the circuit.

On the heels of an excellent top-10 finish in the season opener at Daytona International Speedway in January, Miller is looking forward to Round 2 and the prospect of racing at this new facility.

“The Circuit of the Americas is as amazing from the driver’s seat as it is from the grandstands,” said Miller, who got his first look at the track during November’s Formula 1 event. “It is a lot like Miller Motorsports Park in that there are a lot of turns, and you have to stay focused to remember where you are and what is next. With two long straights, both with relatively slow turns at the end, a set of esses and some fun, high-speed turns, this track has a lot of elements to keep drivers on their toes. We’re looking forward to a good result, and we hope to put on a good show for our fans and our sponsors, Total Care Auto, Miller Motorsports Park and the Ford Racing School.”

James is also anticipating another good event, particularly in light of new upgrades provided by Dempsey Racing, who prepare and crew the No. 158 Miller Racing Ford Mustang Boss 302R.

“I am super excited for the first-ever Continental Sports Car Challenge Series event in Texas,” said James. “Being able to test at the track earlier helped us immensely, and the Dempsey Racing crew has been working hard on some useful upgrades, including a new brake package that will be much needed at the Circuit of the Americas. Our Miller Racing Boss 302R is well suited to the track layout, and I guarantee we will be in the mix come race day!”

The event gets underway on Friday, March 1, with two 45-minute practice sessions preceding that afternoon’s 15-minute qualifying session. The 2.5-hour race is scheduled to take the green flag at 8:05 am MDT on Saturday, with an entry of 65 cars (31 in the Grand Sports class in which Miller Racing competes, and 34 in the Street Touring class) guaranteeing the action will be close and frantic.

The No. 158 Miller Racing Ford Mustang Boss 302R, co-driven by team principal Roger Miller and Ian James, is sponsored by Total Care Auto in addition to Miller Motorsports Park and the Ford Racing High Performance Driving School. The car is prepared and crewed by Dempsey Racing.