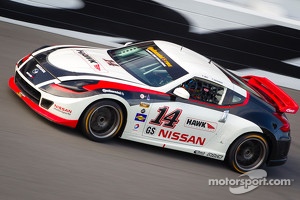 The Grand-Am Road Racing and NASCAR veteran was fully clothed in Doran Racing gear and standing close by his #14 Nissan 370Z prepared by Kevin Doran and his team.

It’s Bell’s second season in Doran colors but first driving the team’s new Nissan. Throughout the week, Bell and company experienced numerous setbacks that would cost some valuable practice time.

One of those issues would be a blown engine, but after hours of work, a new engine was placed in the car and ready to race. With the maturity level of racers beyond his years and a new engine, Bell pressed on towards the green flag Friday afternoon.

The North Carolina resident took the green flag from 13th position and quickly worked his way through the competitive Grand Sport field. An early caution allowed the team to pit for fuel only before sending Bell back out on track.

The 23-year old then began meticulously picking cars off one-by-one until he worked his way up into the fourth position. Bell would hold down the fourth spot for most of his stint until pit stops began to cycle through allowing Bell to pit and jump out of the Nissan.

Bell’s co-drive BJ Zacharias got behind the wheel and readied for the restart when the gearbox began to fail. For the remainder of the race the team was forced to work with a failing gearbox.

Fifteenth was where Bell and his team ended up, but that wasn’t before the veteran turned some heads.

“This weekend was a blast while wheeling the Nissan 370Z around Daytona International Speedway” Bell stated. “ Kevin [Doran] has built a very competitive car that is a real joy to drive compared to some of the other machines I have driven in the CTSCC.

I did what I could to run in fourth for most of my stint until BJ [Zacharias] took over. Unfortunately, we experienced gearbox problems causing him to fade to 15th.

I feel very fortunate knowing that I will be driving against some of the best talent this year, and I can’t wait to get to the next round!”