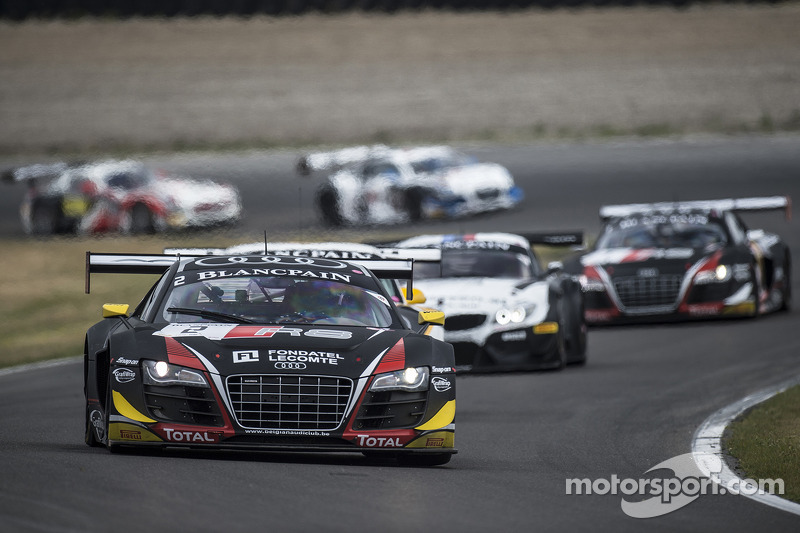 Sudden rain and rare mistakes from some of the top drivers turned the main race of the third round of the Blancpain Sprint Series at Circuit Park Zandvoort into a spectacular affair. In the end René Rast and Enzo Ide, driving the #2 Belgian Audi Club Team WRT Audi, took top spot, just holding off the Series newcomers Dominik Baumann and Thomas Jäger in the #76 BMW Sports Trophy Team Schubert BMW. Dutchman Jaap van Lagen took third, at the wheel of the #21 Tonino Team Herberth Porsche he shares with Robert Renauer.

Vincent Abril and Mateusz Lisowski in the #4 Belgian Audi Club Team WRT Audi were again the quickest drivers in the Silver Cup, while Sascha Halek and Stefan Landmann in the #27 Grasser Racing Team Lamborghini took their second Pro-Am Trophy win of the weekend as well.

The main race of the Dutch round of the Blancpain Sprint Series started with a twelve-minute safety car period, due to a crash at the start, involving the #3 G-Drive Racing Audi of Roman Rusinov and the #60 Bhaitech McLaren of Fabio Onidi. At the restart polesitter Hari Proczyk managed to hold off the #84 HTP Motorsport Mercedes of Maximilian Götz, though the German in the #28 Grasser Racing Team Lamborghini kept the pressure on. Proczyk was still in the lead when the pit window opened, but then it all went wrong for the team that had won the last three races. The mechanics had difficulties in putting the right rear wheel on the car, and once Jeroen Bleekemolen got going, the Dutchman spun, losing all hopes of a podium finish.

New leader Maxi Buhk – who had taken over from Götz – now had René Rast, in the #2 Belgian Audi Club Team WRT Audi, all over his back. Conditions changed suddenly, when a brief rain shower passed over the Zandvoort track. A couple of cars decided to pit a second time to take on rain tyres, but the leaders stayed out on slicks. On the wet track Buhk had difficulties holding René Rast behind him, and halfway through the stint, the Audi driver made an exemplary passing move to take the lead of the race. Soon afterwards Buhk dropped further down the order after spinning in the Mastersbocht.

That left René Rast in the lead with a rather comfortable margin, but Series newcomer Dominik Baumann put his #76 BMW Sports Trophy Team Schubert BMW through its paces to close the gap from the leader completely. With five minutes to go the Audi and the BMW were nose to tail, but Rast increased his pace again and took the team’s first win of the season, earning the 30.000 euro bonus that goes with it. Some twenty seconds behind the leading duo, Jaap Van Lagen got the Dutch fans on their feet when he stormed towards the front behind the wheel of his #21 Tonino Team Herberth Porsche. In their first Blancpain Sprint Series meeting of the season, Van Lagen and team-mate Renauer eventually ended up on the lowest podium step. Maxi Buhk and Jeroen Bleekemolen managed to cut their losses by finishing in fourth and fifth respectively.

In sixth were the winners of the Pro-Am Trophy. With their #27 Grasser Racing Team Lamborghini Sascha Halek and Stefan Landmann had a faultless race, leading the class from start to finish. Silver Cup winners Vincent Abril and Mateusz Lisowski were running in third overall for a while, the result of switching to rain tyres during the driver change. With the track drying quickly, the #4 Belgian Audi Club Team WRT Audi could not manage to match the pace of the cars on slicks however, dropping to ninth eventually. Their main contenders in the Silver Cup, the #34 ROAL Motorsport BMW of Colombo and Fumanelli had also switched to rain tyres and finished in 12th overall.

René Rast (#2 Belgian Audi Club Team WRT Audi): “There was a little hesitation when the rain came, but after radio contact with the team we decided to stay out on slicks. It wasn’t easy, but I had some practice yesterday, when the conditions were the same. Once I was right behind Buhk, it was difficult not to hit him, because our cars were all over the place. We never touched though, and when I made my move, he left me the space to pass. Towards the end, I thought I had enough of a lead, so I slowed down a bit. To my big surprise the BMW closed the gap in the space of one lap, so with five minutes to go I had to push again. Luckily the track had dried, so I could manage some good laps at the end of the race.”

Thomas Jäger (#76 BMW Sports Trophy Team Schubert BMW): “This was my first start in a GT3 car, and I am so happy that I had a good one. After a few laps I managed to overtake the Porsche and was able to close the gap towards the Audi. Dominik drove an excellent second half of the race and the whole team is very happy to score a podium finish in our first race in the Series.”

Jaap van Lagen (#21 Tonino Team Herberth Porsche): “We had some issues throughout the weekend, because we never managed to find the speed on the dry. On a wet track our Porsche behaved marvellously though. So even though on Friday I thought we could never finish inside the top-10, the team did everything they could to improve the car and I am very happy to reward their hard work with a podium finish. The fact that I could do this in front of my home crowd is an added bonus.”

Stefan Landmann (#27 Grasser Racing Team Lamborghini, 1st Pro-Am Trophy): “Just like during the qualifying race I had to drive in the wet with slick tyres. I had to tell myself to stay calm, because I knew the track would dry. I had never driven a single lap of Zandvoort before this weekend, and winning twice this weekend makes me pretty happy.”

Vincent Abril (#4 Belgian Audi Club Team WRT Audi, 1st Silver Cup): ‘At the beginning of my stint, I really thought we could take the overall win in this race. We were one of only two or three cars on rain tyres and I was setting the quickest lap times. But the rain quickly stopped and I was surprised on how fast the track was drying up. Every lap there was a different line to take. In the end, the guys on slicks had no trouble in overtaking me, but fortunately we managed to hold on to first place in the Silver Cup.’

Wet qualifying race at Zandvoort goes to Bleekemolen and Proczyk