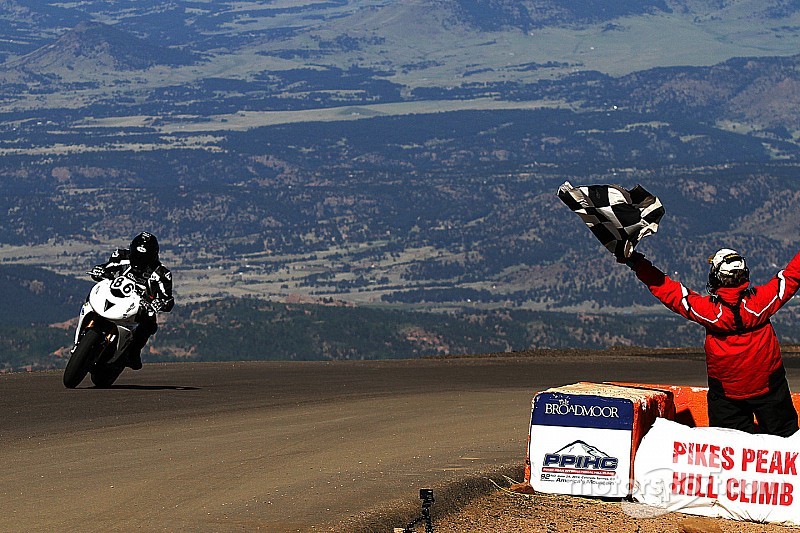 Photographer Trevor Andrusko was stationed at the summit on Sunday. He gives a first person account of the events that unfolded after rider Bobby Goodin crashed his Triumph seconds after taking the checkered flag.

First and foremost, I am writing this with a heavy heart. Second, I have allowed some time to pass so that my emotions regarding the event would not cloud my judgement on the incident. Third, in no way is the following letter meant to be degrading or attempt to point fingers at the organizers of PPIHC and company.

I watched a man die on Sunday, at the summit of Pikes Peak. My eyewitness account is not necessarily important, and I quite definitely do not wish to relive the incident that took place atop that mountain. However, I will recall, to the best of my ability, the series of events that took place that fateful morning.

As this was my first and quite possibly sole attendance to the world famous hill climb, I wanted to experience the most of the event. It is important to note that parking at the top is extremely limited, and makes for a difficult transit up or down the final Sector. Rather than take the media shuttle from the host hotel, I opted to park at Devil's Playground and hike to the summit. This would give me a different perspective on the race track along the three-point-seven miles of asphalt that lay ahead of me.

One major concern of mine during my eighty-minute hike was with how few safety vehicles and emergency personnel there were along the track. Along the route, I only counted three official safety trucks and two private marshal vehicles. I dismissed the thought and continued my ruck. Upon making the summit, just before 8 AM, I noticed that there was no ambulance on standby, meaning the only mobile paramedics were at base camp, nearly thirteen miles away.

Fast forward to the green flag, around 9 AM. Looking around, it is apparent that the transition from asphalt racing surface to gravel staging area is quite rough. Most of the bikes begin the wiggle when crossing the finish line. The intensely strong winds also seem to have an effect on the riders as they exit the final apex, just short of the flag. Some riders seem to wash out towards the dirt on the outside of the track.

The classes switch and the sport bikes begin their runs. The heavier motorcycles seem to handle the pavement change a little better, but they too dance across the gravel. I hear the next motorcycle finishing its ascent and turn to shoot a few photos of the rider. It's a gorgeous Triumph Daytona. A brand new, milky white, 675R, and the rider is wearing matching leathers. I get my photo and turn to put the wind at my back. I look down to review the photo and moments later hear the heart dropping sound that you learn after standing trackside at racing circuits. Silence, followed by crashing.

I looked back up to see this beautiful motorcycle being hurled, and the rider somersaulting through the air. I dropped my camera and ran. Less than thirty seconds later, I'm on site along with two individuals before me. The EMTs are not in my peripheral, and I scan. I pick up two of their signature red jackets about fifty yards behind me to my left. Since I am only registered as media at this event, and medical is now on site, I decide it is best not to get in the way and begin to walk back to the point of origin.

That's when I notice something else out of the ordinary. Chaos. Everyone up here is supposed to be up here. There are no fans; only media, officials, and competitors. But, people are shouting over the howling wind, arms are flailing, and panic is spreading. I begin to realize that there is no plan in place for something of this nature. I scan again. The only vehicles on the summit are a handful of private media cars and the two media shuttles. No ambulance, no safety truck, and no helicopter. Shit.

I would estimate that it took around three minutes for the EMTs to arrive at the scene and begin performing CPR. From there, my sense of time is skewed, but I have printed timestamps as I was updating colleagues at base camp. Based on my text messages, it took ten minutes for the first safety vehicle to arrive with additional paramedics. Another two or three trucks arrive shortly thereafter. Twenty minutes since the accident, the first and only ambulance rolls up. Around the ten minute mark, I hear someone make a request for the Flight For Life medical helicopter. It would not arrive and land until thirty minutes after the incident. Rotors were not turning again until sixty minutes after impact. The Golden Hour has passed. Within that thirty minute window of the helicopter being on the ground, time began to crawl and very little forward progress was made. I was not close enough to observe the condition of the individual, but I can only assume the worst. There was no urgency.

During all of this confusion and chaos, something very interesting began to happen. Officials on the summit not involved in life-saving efforts began pushing back the media and threatening to confiscate images. They were corralling us into huddled groups so that they could keep a keen eye and attempt to gain control of the situation. I realize now that my original hypothesis is gaining strength. Nobody knows what to do. There is no plan in place for this. There is no equipment stationed and staged. They are more worried that images will begin to leak out without having an official statement in place. "Racer dies in parking lot after finish" is a little difficult to explain to the average person.

For the rest of the day, there was no excitement. A somber mood filled the air. The only thing that I wanted to do was get off of that terrible mountain. No updates were offered to anyone at the summit, but I already knew. If he had not succumbed to death immediately, the painfully slow medical response and lack of contingency had finished him.

These are the facts of the incident, written first hand from someone who has experienced death too many times.

Pikes Peak is dangerous, has always been dangerous, and will continue to be dangerous. It is accepted, and almost expected, that someone may perish at this event. I fear that this nonchalant attitude towards death has begun to evolve the prestigious exhibition of speed into something demonic and inhuman.

Motorsport is dangerous, that we know. However, motorsport is organized and planned. That is the difference between a sanctioned event and an illegal festival of speed. To not take proper precautions or plan accordingly in the event of a catastrophe is immature. There is no acceptable reason for this unwillingness towards safety, especially now that the racing is only getting faster.

Currently, I wish to never visit Pikes Peak again. I hope this attitude changes, as I have always held great respect for this competition and its racers. I hope that the organization can collaborate to create a reasonable and expeditious plan of attack for unexpected future incidents.

My deepest condolences go out to the friends and family of Bobby Goodin. It is important for you to know that he passed with a wide, teethy, grin on his face as he crossed the finish line at the 92nd Pikes Peak International Hill Climb.

Cold and cruel? Yes, Pikes Peak can be both, but we keep coming back