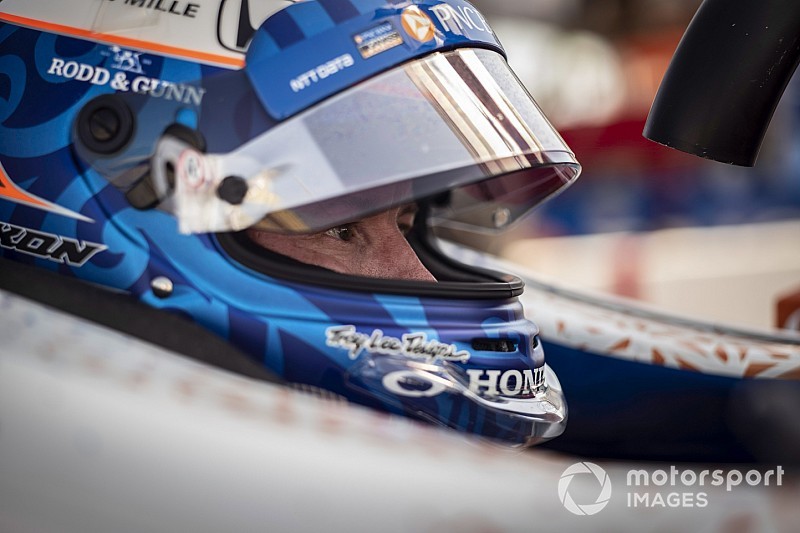 Scott Dixon was left baffled by the behavior of his Chip Ganassi Racing-Honda over the course of two days at Iowa Speedway, but admits he was happy with his comeback from one lap down to finish second in the Iowa 300.

Dixon qualified eighth, struggled through most of the race, and almost went two laps down but with nothing to lose, his team put him on an alternate strategy in the final stint. This paid off handsomely when Ed Carpenter crashed his car on Lap 262. Dixon had stayed out when the front runners made their final pitstops under green-flag conditions.

Not only had this put him back on the lead lap and in second place, it meant that he could make his own final stop while the field was running at 70mph under the Carpenter-caused caution. Thus he emerged from the pits in sixth and would restart on tires with approximately 15 fewer racing laps than the four of the five cars ahead.

However, Dixon said his car’s behavior all weekend had been a puzzle.

“It was just one of those nights where we just really didn't have the pace,” he said. “We burned through the tires really quickly. We tried adjusting the balance. I was really loose on the first one. Second one lots of understeer…

“Huge credit to the team. They hung me out pretty long before the last caution. It enabled us to stay on the lead lap, get that lucky yellow there, get new tires. We were the first on the new set of tires. Had a good restart, were able to pick off some cars but Josef had kind of marched off out front.

“All in all, considering how our race was going, we were actually probably going to be happy with a top 14 or 15, so that was pretty stellar. Tonight was just one of those things, man. I can only thank the team for what they did. I tried to hold on till the end and make the most of it. Yeah, we'll take it.

“We didn't have a perfect car at any point this weekend. I feel we actually made some pretty good gains at the end of the final practice. But that was really bizarre, too – we didn't really change too much.

“[In the race] we kind of chased it all night. It was one of those situations where we didn't really have the grip. Even adjusting the front wing, tire pressure was shifting balance of the car a ton, much more than I really experienced before. The second to last set of tires I thought were extremely bad. The last set felt good, but we had a lot better tires than the rest.

“We’ve really struggled here the past few years. Not exactly sure why. We tested here with Felix [Rosenqvist, teammate]. It looks like we didn't really accomplish much. It's definitely a track where we need to totally revamp and try to understand where we're going wrong.”