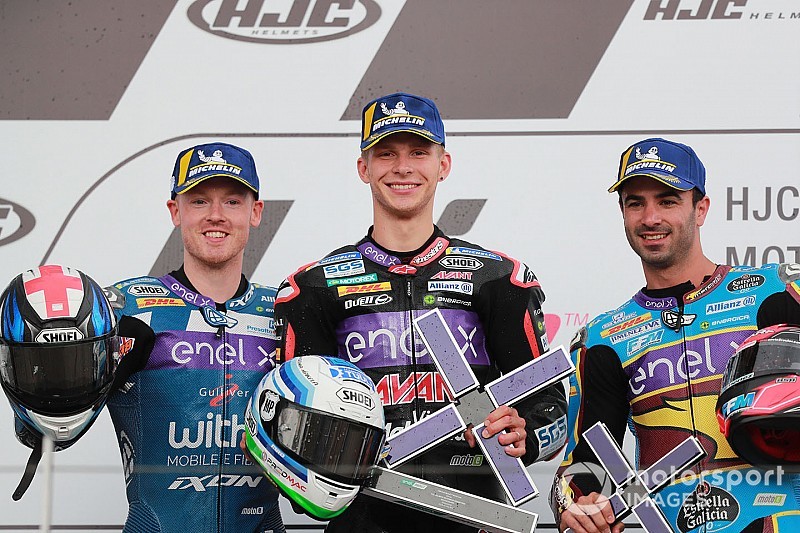 Niki Tuuli won a frantic first-ever MotoE race at the Sachsenring, which was red-flagged after five laps due to a crash for Lorenzo Savadori.

Overnight rain meant the race was declared wet and the race distance was slashed to seven laps from the original eight, even though a large dry line had already formed by the time the event got underway.

Ajo rider Tuuli, who had dominated qualifying, immediately lost the lead off the line, passed by Tech 3's Hector Garzo before Turn 1, although Garzo was then pipped by Aprilia MotoGP tester Bradley Smith, riding for the Sepang-backed One Energy Racing squad, a few corners later.

Practice pace-setter Mike Di Meglio (Marc VDS) had also found his way past Tuuli and took the lead from Smith at the first corner of the second lap, with Tuuli following through, only for Smith to retake first place by the end of the lap.

But as the order in the lead pack stabilised, Tuuli launched his bike down the inside of Smith at Turn 12 on the next lap - and while he ran out wide and allowed the Briton back through, he then completed the move at Turn 1.

The Finn proceeded to edge clear from there, and was four tenths ahead of Smith at the end of the fifth lap, which ended up determining the classification.

This was because Gresini rider Savadori had gone down while battling Eric Granado (Avintia), with Savadori's bike slamming into the air fence at Turn 8 and causing significant damage.

The race was subsequently red-flagged and the results were declared, with third-placed Di Meglio joining Tuuli and Smith on the podium.

Garzo headed Gresini's Matteo Ferrari in fourth, while Alex De Angelis (Pramac) held on to sixth ahead of fellow ex-MotoGP rider Xavier Simeon (Avintia), the pair having made contact while contesting the position.

Granado, who had won the pre-season race simulation, started on the front row but was shuffled to the back of the pack in the opening-lap melee. He recovered to eighth, heading ex-MotoGP star Sete Gibernau (Pons) and 2009 125cc champion Nico Terol (Angel Nieto).