Tetsusta Nagashima says he was calmed by thoughts of his late compatriot Shoya Tomizawa on his way to a surprise first Moto2 victory at Qatar.

Nagashima’s victory from 14th on the grid at Losail, where the intermediate class topped the bill due to the MotoGP race being cancelled, came 10 years after Tomizawa won the very first Moto2 race at the same venue.

The Ajo rider said Tomizawa was “like a brother” to him, with Nagashima a close admirer and later a teammate in the All-Japan Superbike series.

Tomizawa tragically lost his life in a crash during the 2010 Misano Moto2 race.

Speaking post-race, Nagashima admitted his thoughts turned to his fallen countryman as he neared the chequered flag on Sunday.

“The last two laps felt really long,” he recalled. “I didn’t feel at all as if I had won. I was thinking, ‘so, is it over yet?’ I was really nervous.

“On the last lap at Turns 12 to 14, where there are three consecutive right-handers, I was thinking while I was riding, ‘I wonder if Shoya felt the same as me when he won… what kind of feeling did he have on the last lap?’ From there until the end I felt surprisingly calm.”

Nagashima has raced full-time in Moto2 since 2017 and prior to his win in Qatar had only managed a best result of fifth place in the category.

The 27-year-old was given a surprise shot with the Ajo KTM squad (which actually runs Kalex chassis now after KTM axed its Moto2 chassis project at the end of last year) having initially signed up to race for the SAG team for a second year.

Iker Lecuona was originally set to take the place of MotoGP-bound Brad Binder at Ajo until Lecuona was hastily called up to Tech 3's premier class team after KTM suddenly parted ways with Johann Zarco, with Nagashima recruited to fill the vacant Moto2 seat.

“In the second half of the race, when I had got up to fourth or fifth, I got stuck at the first corner and dropped to sixth," Nagashima reflected of his journey towards victory. “At that time, I was racing with the feeling of, ‘get out of my way, everyone!’

“The pace was really stable and I was confident that I was faster. So, I somehow just wanted to get ahead.

“After that, at Turn 10, my front was cut off and for a moment I nearly crashed. I was impatient, but soon after I suddenly moved up to fourth, and I thought, ‘oh, maybe I can do this’.” 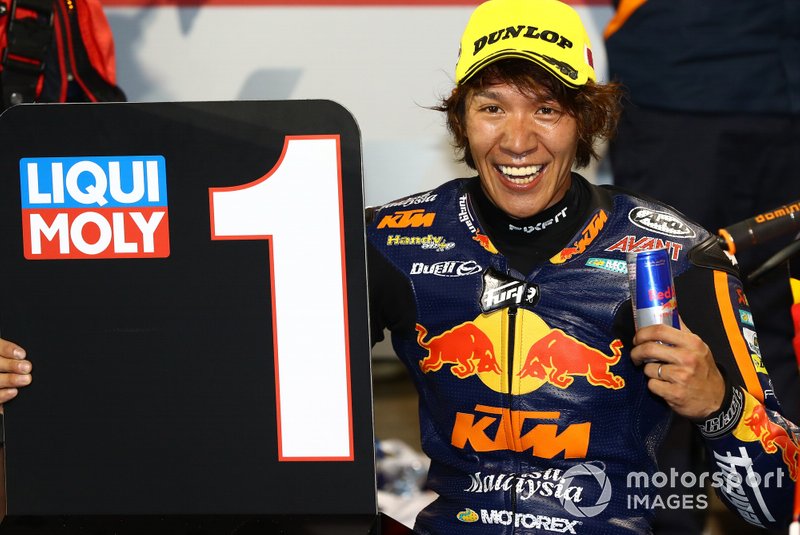