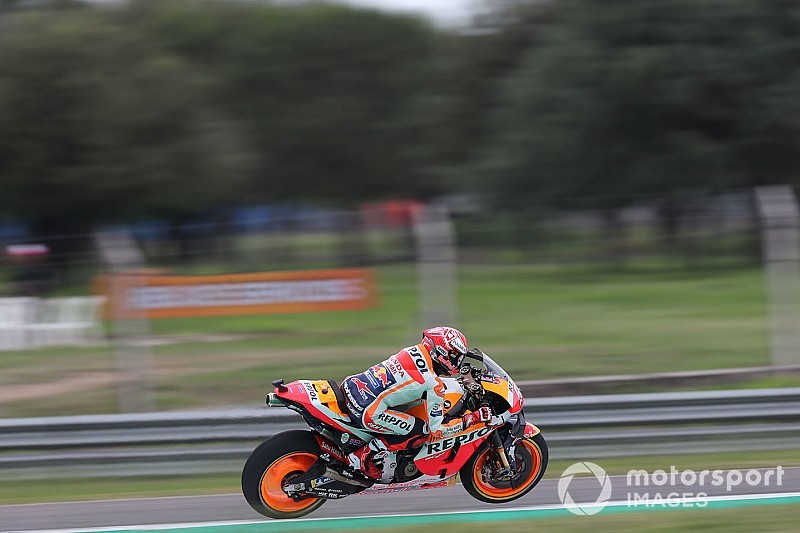 Marc Marquez retook his place at the head of the Argentina Grand Prix timesheets in third practice, as Friday pacesetter Andrea Dovizioso suffered a crash towards the end of the session.

Honda rider Marquez, fastest in FP1 on Friday but only eighth in FP2, was first to beat Dovizioso's benchmark on Saturday morning at Termas de Rio Hondo with an early lap of 1m39.170s.

With 20 minutes left on the clock, he became the first rider to dip into the 1m38s, and was the only one to do so until the final five minutes, when most riders equipped fresh soft tyres in search of automatic Q2 berth.

Jack Miller, second quickest on Friday, briefly deposed Marquez at the head of the pack with a 1m38.677s aboard the Pramac Ducati, but the reigning champion responded with a 1m38.542s before logging a 1m38.471s as the chequered flag fell.

That put him 0.206s ahead of Miller in the final reckoning, while Cal Crutchlow made it two Honda riders in the top three with a time only 0.255s off the pace on his LCR machine.

Lead Yamaha rider Maverick Vinales made a late surge up the leaderboard to go fourth, a further tenth back, while Ducati's Danilo Petrucci rebounded from a tough Friday to set the fifth-fastest time.

Two more Yamaha riders followed, Franco Morbidelli on the satellite Petronas SRT example heading up mentor Valentino Rossi, who was 0.710s off the pace in seventh.

Dovizioso's Friday time was good enough to leave him eighth in the combined timesheets following the Italian crashing at Turn 1 with three minutes left on the clock.

Jorge Lorenzo (Honda) and Fabio Quartararo (Petronas) were the remaining riders to make the automatic Q2 cut, having set the eighth and ninth-best times of the session.

Takaaki Nakagami was 10th fastest for LCR Honda but 11th in the combined times, meaning he'll have to go through Q1.

Besides Dovizioso, the other riders to fail to improve on their Friday times were Suzuki's Alex Rins, who was left down in 15th overall, Aprilia's Andrea Iannone (19th) and Avintia Ducati man Karel Abraham (21st).

Abraham's Avintia teammate Tito Rabat was the only other rider besides Dovizioso to crash.

Argentina MotoGP qualifying as it happened