© 2021 Motorsport Network. All rights reserved.
TV Buy tickets Store
Previous / Lorenzo: From unsettling Rossi to back of the grid ignominy Next / Lorenzo sorry to have "disappointed" Honda and Puig
MotoGP / Special feature

Speaking during a press conference in Valencia, three-time MotoGP champion Jorge Lorenzo looked back on his accomplished career and outlined his reasons for retiring. 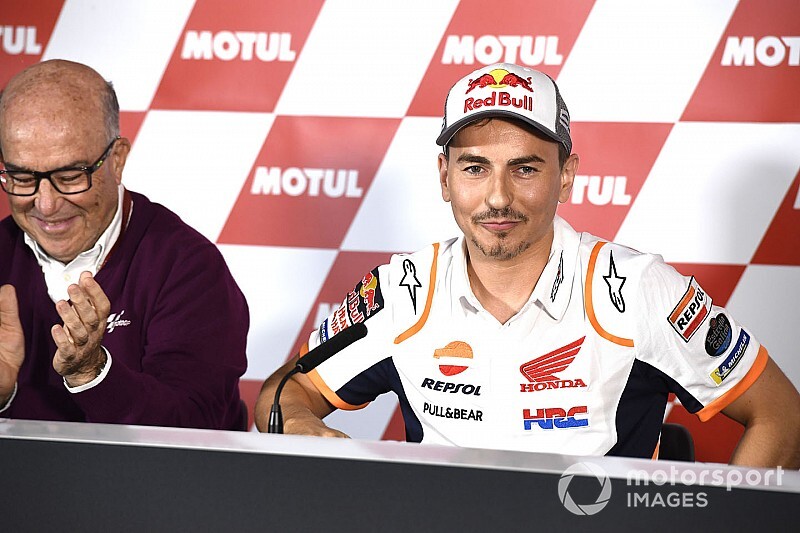 "And then [there's] the day you retire. As you all imagine here, I'm here to announce that this day has arrived for me. This will be my last race in MotoGP and at the end of the race I will retire as a professional racer.

"Everything started when I was three years old, almost 30 years of complete dedication to my sport. People who work with me know how much of a perfectionist I am, how much energy and intensity I always have put into my sport. To be so perfectionist requires a lot of motivation. That's why my nine years in Yamaha were so wonderful, probably the best years that I enjoyed in my career.

"I felt that I needed a change, if I wanted to keep this full commitment to my sport. That's why I decided to move to Ducati. This gave me a big boost in my motivation, and even though the results were very bad, I used this extra motivation to not give up and always keep fighting, till I achieved this beautiful and amazing Mugello victory in front of all the Ducati fans.

"Then later, when I signed with Honda, it gave me another big boost because I achieved all the riders' dream, to be an HRC rider for Repsol Honda. Unfortunately injuries came very soon to play an important role in my results, in my performance. I wasn't able to be in physical normal conditions, to be fast and to be competitive. And this, plus a bike that never felt natural to me, gave me a lot of problems to be competitive like I wanted to be.

"Anyway, I never lost patience, I kept working with the team, thinking that probably was a matter of time that everything came to the right place. Then when I was starting to see some light in this tunnel, happened a nasty crash in Montmelo test. And then some days later I crashed again in this ugly Assen crash, you all know the consequences that that created.

“I have to admit, when I was rolling on the gravel and I stood up, I thought to myself: ‘Okay, Jorge, is this really worth it, after what I achieved? To keep suffering? I'm done with it, I don't want to race anymore.’

“But then I came back home, I decided to give it a try, I didn't want to make any early decisions. I kept going.

“But the truth is, from that moment, the hill became so high and so big for me that I was not able to find the motivation, the patience, to keep trying to climb this mountain.

"You all know I love to ride, I love competition, I love this sport, but above all things I love to win. I realised at some point that this was not possible, at this short time with Honda.

"At this stage of my career, was impossible for me to keep motivation. My goal that I put into my mind at the beginning of the season was not realistic, as I said, in this short time.

"I have to say, I feel very sorry for Honda, especially for Alberto, who was the one who gave me this opportunity. I remember very well that day in the Montmelo test [in 2018], the first meeting that I got with him, to start chatting about my move to Honda, and I said to him: 'Alberto, don't make a mistake signing the wrong rider - trust me, and you will not regret it'.

“However, I think this is the best decision for me and for the team because Honda and Jorge Lorenzo cannot be fighting to just score some points at the end of the race, or even to enter in the top five, or even fight for the podium - which I think would be possible with time. I think we both are winners, that need to fight to win.

"So, speaking a little bit more for happiness, coming back to my beautiful and successful career, I always said that I am a very lucky guy. Sometimes I feel a little bit like this movie called in 'One in a Billion', that narrates the life of this Indian basketball player [Satnam Singh] that was the only Indian that ever came to play in the NBA.

"Because I raced against dozens and dozens of unbelievable riders of my generation, and [not] any of them achieve what I achieve, and they were [not as] successful as I am, and especially most of them, they even didn't arrive in the world championship, had to go back to work, just doing normal jobs. That's why I've always felt very grateful.

"It's true that I've been always a very hard worker and I did a lot of sacrifice but without being in the right place and the right time, and especially without the help of many people who helped me to achieve what I achieved, this would be not possible.

"That's why I'm also here to thank a lot all the help that you bring me in this sport, especially I would like to thank Carmelo [Ezpeleta] and Dorna, for all this good treatment that they always give to me and to make this sport so great like they did.

"And then, you know, obviously my mother, who brought me to this world, my father for transmitting to me this love for bikes and all the sacrifices that he did, Juanito [Llansa], for being always loyal and staying with me in my career. And my fans, my fan club, all the fans in general of MotoGP, who keep this sport as it is today.

"This is it. Thank you all for all the help. It was a pleasure to work with you, and with all my heart I wish you all all the best, all the luck professionally and also personally."

Lorenzo: From unsettling Rossi to back of the grid ignominy