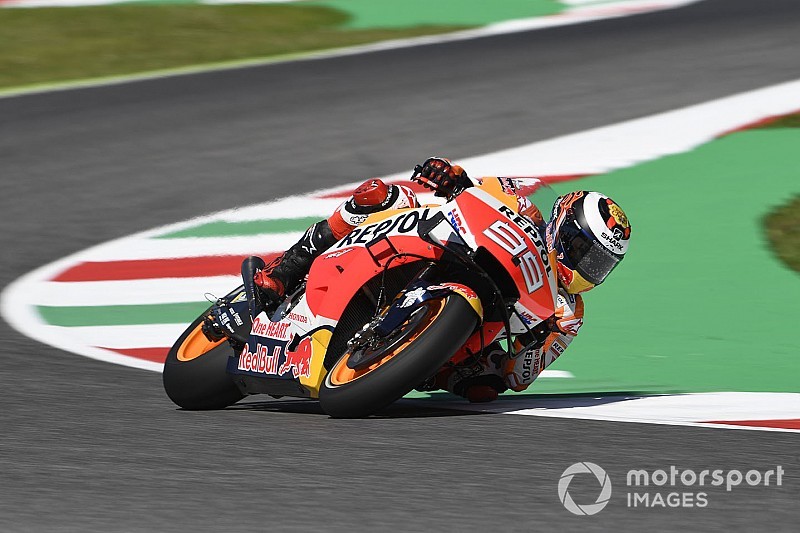 Jorge Lorenzo hopes that a new fairing for his Honda MotoGP bike, which is expected to arrive after next month's Barcelona race, will alleviate his current issues with braking.

Lorenzo said that braking and entering corners are the areas he needs to improve with the Honda, but made little progress on Friday at Mugello, as he ended up only 20th-fastest.

He said that he continued working on the ergonomics of the Honda during the day, but did not find an improvement and will stick with his Le Mans configuration at Mugello.

However, he revealed that there is a new Honda fairing in the pipeline, expected after Barcelona, the race after Mugello, and Lorenzo hopes this will give him "more support for braking".

"Today we try a different hand lever, more forward, to be able to have more weight on the front," he said.

"For the moment we put away this hand lever because I feel worse in some areas, was not better.

"For the fuel tank, we are trying the normal fuel tank that I was using in Le Mans and the one Marc [is using], but for the moment this improves some areas, and worse in another, maybe I will keep it for this weekend.

"It's not the ideal solution for the support on braking but at least I am a little bit more free in the corners.

"We are gonna try to wait for the new fairing that probably will give me a little bit more support for braking but we need to wait because this will bring us new aerodynamics."

LCR Honda's Cal Crutchlow said he was "not surprised at all" to see Lorenzo struggling as Mugello is one of Honda's poorest tracks.

"I’m not surprised at all, in the slightest, because this is one of the hardest tracks [for Honda] and one of the easiest tracks for the team he was riding for last year," said the Briton, who was eighth-fastest on Friday, one tenth behind Marc Marquez but a whole second faster than Lorenzo.

"I think he will struggle here and continue to struggle, this is the reality of the situation. I hope not of course, for the sake of us all [Honda riders] improving."

Lorenzo added that his race pace is better than his one-lap performance and that he targets having a similar pace to that of the frontrunners.

"This morning I had so many difficulties to be competitive, I did not feel comfortable on the bike in the beginning but little by little I keep going and riding and about the pace was not so bad.

"For the moment we are not very explosive for one lap, in Le Mans we were, but not here. This can be a problem for the grid but in our pace, I am quite happy."

Miller: Crash caused by "idiots waiting on the racing line"

Espargaro passed Rossi "like he was stopped" in practice