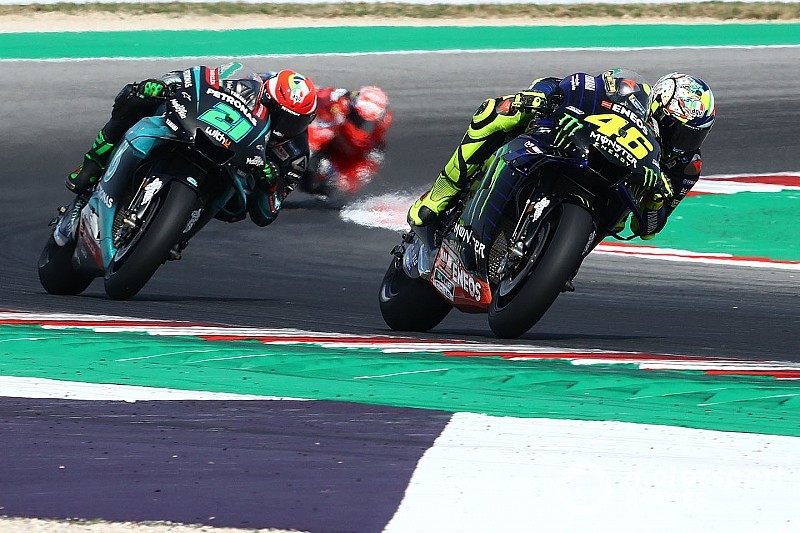 Valentino Rossi says he is seeking a "solution" to his current deficit to fellow Yamaha MotoGP riders Maverick Vinales and Fabio Quartararo after finishing a distant fourth at Misano.

Yamaha put four bikes in the top five in the San Marino Grand Prix, but while Quartararo fought Marc Marquez for victory and Vinales was a close third behind the pair, Rossi ended up 11 seconds adrift of the podium.

Rossi said it was unfortunate to miss out on a Misano podium and admitted that he was somewhat alarmed by the size of the gap to the riders ahead.

"During the weekend we had some points of the track where I was not strong enough, and at the end the race was a little bit what we expected because the top three had a better pace [throughout practice]," Rossi said.

"So, I arrive fourth, it's a shame for the podium but also we take a little bit too much gap from the top three, so we need to work harder and try to be more competitive in the next races.

"During this season we're struggling about the rear grip, especially compared to Quartararo, also a little bit with Maverick, they accelerate better, they are able to open the throttle [with] more grip and they exit from the corner better.

"After the stop of the summer break, we modified the balance of the bike, and looks like we improved compared to the first half of the season, but it's not enough, because I'm better in braking, in entry I'm not so bad, but in acceleration we lose. So we need to find the solution for being strong in that area."

Rossi finished a tenth ahead of Quartararo's Petronas Yamaha teammate Franco Morbidelli, who like Rossi had no answer to the pace displayed by Quartararo and Vinales all weekend.

Asked whether this was because he and Morbidelli are taller and thus heavier, Rossi said: "The good thing for us during the weekend is that Yamaha are competitive, and looks like the other manufacturers have some more problems compared to us.

"Maverick and Quartararo are faster, and me and Franco are a little bit more in trouble, especially in the exit of the corner. Maybe we are taller - maybe it's that, maybe no, we don't know. But we need to find a solution for us to be stronger."

Morbidelli, for his part, reckoned Quartararo's edge lay in his cornering speed.

"Fabio is able to make very fast corners with very high speed and very little effort, I don’t know how," Morbidelli said. "But this is his strong point, and we will need to try to improve to reach his level."