Yamaha MotoGP rider Valentino Rossi has lamented a "wrong" Valencia qualifying strategy that left him mired in traffic and consigned him to a lowly 12th on the grid. 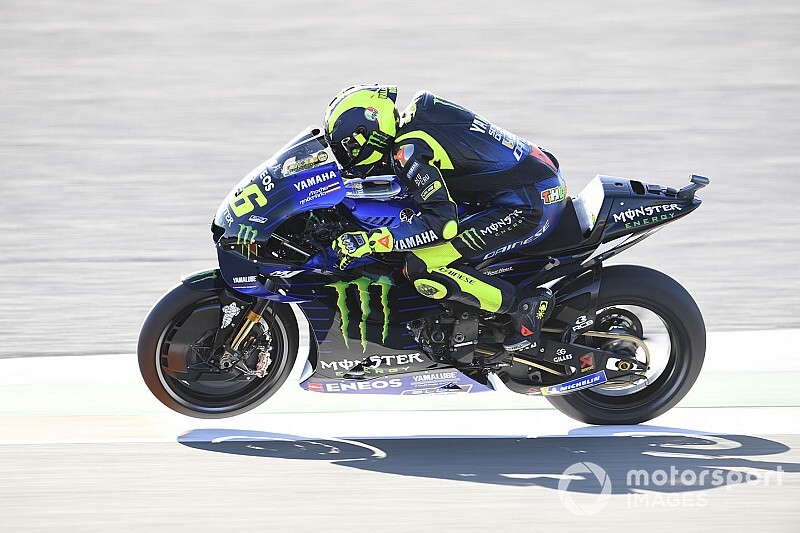 While the other three Yamahas all made it to the top five in the second qualifying segment, Rossi was 0.976s off the pace in the pole shoot-out, which left him slowest of those partaking in Q2.

The Italian failed to improve on his second run in the session despite having been between a tenth and a quarter of a second up compared to his best effort on three separate laps late in the session.

The result came as a disappointment to Rossi, after he had secured a spot directly in Q2 with a strong fourth place in third practice on Saturday morning.

"It's a mixed day because this morning FP3 was good, the conditions were not fantastic because was it very very cold but I was able to do a good lap at the end, finish in P4 and was straight into Q2, which was our target," Rossi said.

"[But] qualifying I am not very happy [with] because we didn't work well, we didn't make the right strategy.

"I was in the track with the second tyre in the wrong moment and unfortunately I was not able to improve, because I had too much traffic. So, our potential for sure was better."

Rossi conceded such matters in qualifying are often a question of luck, and regretted running behind KTM's Pol Espargaro - who had been running with a worn front tyre and a hard rear - in the final moments of Q2.

However, he also said his Yamaha crew must work on improving its approach to qualifying for 2020.

"Today I was also unlucky because unfortunately I took [the tow of] Pol Espargaro, who was in the track with a used tyre. So, I didn't have to be there.

"But anyway, looks like we are not fantastic on strategy. So we need to improve, next year, we need to try to work in another way."

Rossi was only 11th-fastest in FP4 - in which riders to their race pace simulations - and admitted he is not overly optimistic for Sunday.

"Starting from 12th is difficult for sure because here in Valencia it's very difficult to overtake, it's one of the most difficult tracks [for that].

"And also because my pace is not too bad but nothing fantastic. So it will be a hard race."

Zarco: Joining Avintia would be "same mistake" as KTM move