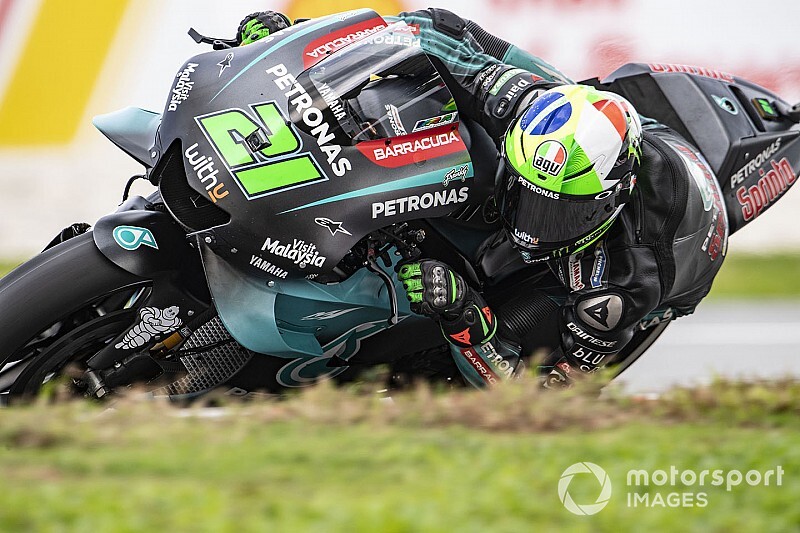 The Italian jumped into the top spot with nine of the 45 minutes to go, his initial benchmark a 1m59.074s.

He then improved to a 1m58.761s during a frantic final run, enough to hold off Quartararo by a couple of tenths.

It's the Frenchman, however, that will head into qualifying as the outright pace-setter, thanks to his record-breaking 1m58.576s on Friday afternoon.

Honda's Marc Marquez was best of the rest with a 1m59.066s, the world champion steadily improving throughout his final run.

Having set the pace up until the final 10 minutes, works Yamaha rider Maverick Vinales settled into fourth place with a 1m59.074s.

Jack Miller was best of the Ducatis in fifth, the Australian spending much of the session on the Q1/Q2 bubble before securing his direct passage with a 1m59.227s.

Pramac teammate Francesco Bagnaia grabbed a Q2 slot of his own with a 1m59.253s during the final runs, which left him sixth, just clear of Suzuki's Alex Rins.

Johann Zarco was the big surprise of the session, a 1m59.486s leaving him eighth on the timesheets and sending him straight into Q2.

That came after a low-speed fall early in the session, Zarco running wide at Turn 1 before losing the rear on the hard shoulder outside the corner.

The Frenchman's late improvement was bad news for LCR Honda teammate Cal Crutchlow, who, after a rollercoaster of a session that saw in in Q2 one minute and out the next, was bumped out by Zarco's lap.

It was a similar story for Joan Mir, the Suzuki rider temporarily occupying a Q2 spot after knocking Crutchlow out early, before falling short as Bagnaia and Zarco improved at the end.

Valentino Rossi and Andrea Dovizioso both finished outside the Top 10 for the session, the former 12th and the latter 14th, but clung on to Q2 spots thanks to their Friday times.

Among those needing to go the long way in qualifying later on Saturday are Danilo Petrucci (13th), Pol Espargaro (16th) and Jorge Lorenzo, whose miserable weekend continued with the 17th fastest time in that session.