Motorsport.com writer Billy Tewes looks into the history of Ford's time in stock car racing, and what the future holds for the "Blue Oval."

Ford Racing has etched another milestone in motorsports history. With Greg Biffle’s win at Michigan this past weekend; Ford Racing has officially won 1,000 races in NASCAR’s top three divisions.

Ford Racing’s 1,000th victory was won at a very appropriate spot on the NASCAR schedule as Ford leads all manufacturers with 33 races won at Michigan. This weekend was also a homecoming of sorts for Jack Roush, owner of race winner Greg Biffles #16 3M Fusion as Roush Racing was originally located in Livonia, Michigan.

Fords first victory in a racecar came well over 100 years ago back in 1901 by Henry Ford himself. Between then and now, Ford Racing has built a legacy around quality drivers such as Fireball Roberts, Ned Jarrett, David Pearson, Mark Martin, Alan Kulwicki, Bill Elliott, Dale Jarrett and Matt Kenseth just to name a few. 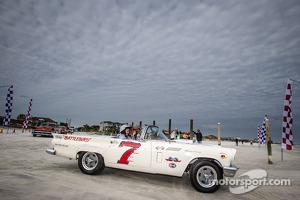 In 1949, the very first race ran in NASCAR’s Grand National Series, now known as the Sprint Cup Series, was won by Jim Roper in a 49’ Lincoln for R.B. Mcintosh. Ford would soon get their first cup victory by Jimmy Florian in 1950 which would be his first and only career NASCAR victory.

One of the more celebrated Ford championships was won by Alan Kulwicki in 1992. Kulwicki, from Greenfield, WI, sacrificed everything he owned to race in NASCAR’s then Winston Cup Series. Kulwicki was a shining example of owner/driver who could win races and compete at a high level without funding like championship contenders Bill Elliott and Davey Allison had. 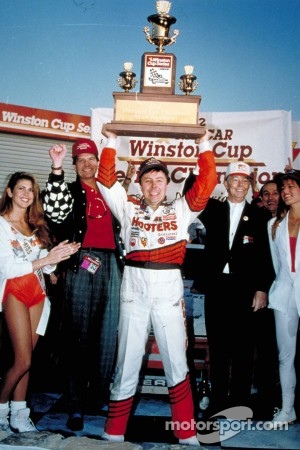 The 1992 season was a magical one for Ford. The first nine races of the season were won by Ford drivers and the championship was so close it came down to Kulwicki and Elliott being separated by 10 points. Ford would win 16 of the 29 races and place three drivers at the top of the standings when all was said and done.

Even though Fords last Sprint Cup Series title came nearly 10 years ago, they have a group of drivers who are certainly capable of winning a Sprint Cup championship. Drivers such as Carl Edwards, Greg Biffle and last year’s champ Brad Keselowski will certainly give Ford the results they are looking for. The future is also bright as up and coming drivers such as Trevor Bayne, Ricky Stenhouse Jr. and even Joey Logano (who is now with Penske Racing) will provide plenty of talent as long as the equipment is there.

Will this win give Ford Racing the confidence they need to move forward in 2013 and win more races? Only time will tell. I believe their best opportunities will be on the intermediate tracks as they still have a lot of work to do to catch up to Toyota and Chevrolet.

If Ford fizzles out and can’t stay competitive, I believe Ford Racing should pressure Roush Fenway Racing as well as Penske to spend more on R&D and keep that Big Blue Oval in the limelight.

Sonoma an unlikely favorite for Wise