Should Talladega have a date on the Chase race calendar?!

As a viewer and fan of this sport, I think it I can safely say I am not the only one who was disappointed with the result of the Camping World RV Sales 500 at Talladega this Sunday. Switching between that and the dismal attempt at a football game between San Diego and Jacksonville, I’m not sure I could pick which event was more worth my while.

Talladega has lost much of what used to make it a gem as well as being two dates that no NASCAR fan should ever miss. The side by side pack racing is gone as it was clearly evident that the low line could not mount a charge late in the race. Whether that qualifies as exciting racing is subjective yes, but that argument can be had another day.

Drivers are so afraid of making a mistake and ruining not only their day, but so many others that it puzzles me as to why Talladega is even in the chase! We have ten races to determine a championship out of 36 and NASCAR willingly allows for one of the most dangerous tracks to be part of those ten? I’m not the first and certainly not the last to ask this question, but I will pose it here. Do we not believe that the Chase drivers deserve a better track to run at as part of their championship campaign? 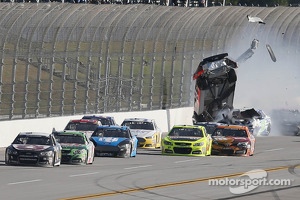 The answer in my estimation is yes they deserve a track where they can take some risk and not have to fear wrecking out on their championship hopes. We witnessed Jimmie Johnson and Matt Kenseth lay back in the middle of the field on the final push to the front because neither could afford to be caught up in a major wreck. That is not racing, that is playing it safe and backing into a secure position and ride out the finish. I do not blame either driver; I blame NASCAR for having this track in the Chase. It is extremely sad when competitors willingly lay back to dodge a massive wreck.

There are far more deserving tracks such as Bristol or even the much talked about road course that could be added to the chase. At least give the drivers the opportunity to put the race in their own hands and race hard for title. If Kenseth or Johnson wrecked at Talladega, that would put one of them in a secure position with four races to go and I believe NASCAR knows that. 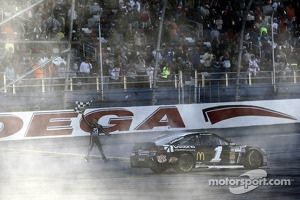 It was sad to watch the final laps unfold as I thought to myself that this race is going to end in single file fashion and there is nothing anyone can do to mount a challenge for the lead. McMurray should have been a sitting duck as a two car tandem draft was supposed to try to pass him. But the two rookies of Austin Dillon and Ricky Stenhouse were the reason for the final accident and it was not too surprising to see that rookies caused a problem at Talladega.

Maybe this is the way it should be and NASCAR has it right, but I firmly believe there is a better way to approach the final ten races. Put the racing in the driver’s hands and let them fight it out for the championship. For Kenseth and Johnson, they are extremely lucky to have survived Talladega and only be within four points of each other. With it appearing to be that they are the only two in contention for the title this year, it was very possible that we could have safely crowned a champion if one of them wrecked out. NASCAR should aim to fix this problem as the shine and allure of Talladega is long gone.

Almirola to drive the No. 41 Ford this weekend in honor of Maurice Petty

Labonte is close to home in Martinsville