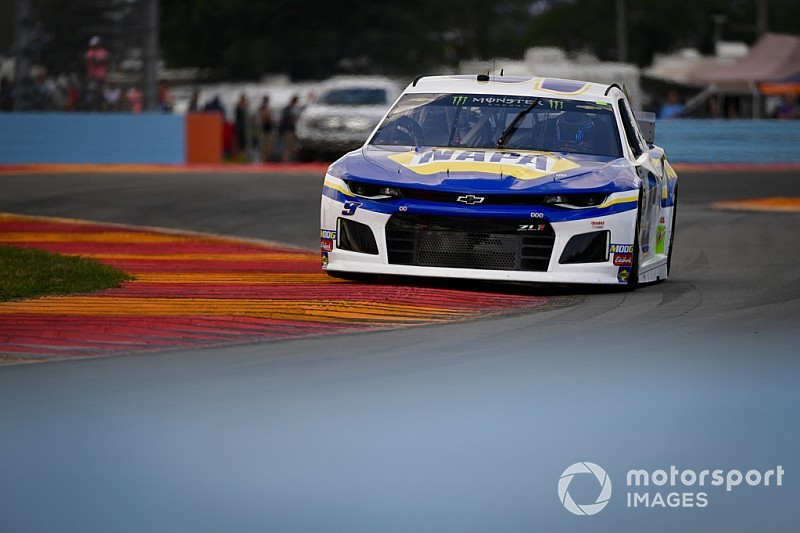 Elliott, looking for his second consecutive NASCAR Cup Series win at the Glen, was being challenged for the lead by Martin Truex Jr. with one lap remaining in the 20-lap stage but a caution for Bubba Wallace froze the field.

Following the break between Stages 1 and 2, most of the lead-lap cars pit but Kyle Larson stayed out and inherited the lead.

On the restart on Lap 25, Larson was followed by Harvick, Landon Cassill, Alex Bowman and Bowyer. Elliott, the first off pit road, restarted ninth.

Kyle Busch was penalized for speeding on pit road and had to restart the race from the rear of the field.

With 15 laps remaining in the second stage, Larson had an almost 1-second lead over Harvick. Bowyer ran third, Elliott fourth and Bowman fifth.

On Lap 26, Parker Kligerman spun in the inner loop but was able to continue on without a caution.

By Lap 28, Elliott had made his way back to second, about 1.5-seconds behind leader Larson.

Larson elected to pit on Lap 29, which returned Elliott back to the lead. Harvick was second and Bowyer third.

Reed Sorenson appeared to blow an engine while driving through the inner loop on Lap 34, which brought out a caution. Byron pit while pit road was closed which means he will have to restart the race from the rear of the field.

Several cars pit during the caution but Elliott remained on the track and continued to lead the way when the race restarted on Lap 37.

Truex slid by Harvick on the restart to take the second position and Elliott maintained his lead.

On Lap 39, Wallace slammed into the tire barrier in Turn 5 to bring out a caution, which brought an early end to the stage.